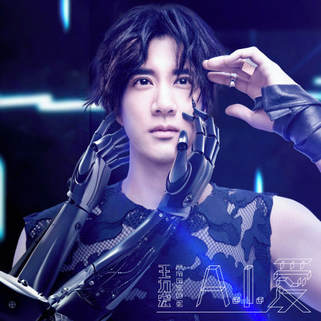 In his long-awaited comeback, Mandopop king Wang Leehom builds on his previous experimentation with EDM sounds, releasing part 1 of 2 for his new digital album ‘A.I. Love’. The first song on the two-song EP is the self titled first single ‘A.I. Love’, which since its release has been hotly debated over by netizens, who either seem to love or hate the song. As a hardcore Leehom fan and  music journalist, I decided that now would be as good a time as ever for me to weigh in on the debate.

Starting off by unpacking the song lyrics, Leehom’s voice; auto-tuned into a somewhat eerie manner comes in, chanting ‘ethics attain ethics’; a play on the similar pinyin of those words in Chinese. In doing so, Leehom is already using the intricacies of the Chinese language to make a point. Both the words ‘ethics’ and ‘attain’  have the words ‘dao de’ in them in Chinese; ethics meaning ‘dao de 道德’ and attain meaning ‘de dao得到’. Leehom uses their similarities; singing them in sequence to demonstrate the thin line that exists between ethics and attainment of success.

We see this particular play on words appear again leading up to the chorus ; and Leehom borrows the same technique for the chorus, singing ‘A.I. Love(Ai)’ repeatedly. This time, the play on words occurs between A.I., an English short-form for artificial intelligence and ‘愛Ai’, the Chinese word for love. The wordplay works on two levels; first of all subtly reinforcing Wang’s ongoing engagement with ‘East meets West’ themes within his music, and secondly making a statement on what he sees as the tug and pull between a reliance on digital technology at large (so much so that we use it to create sentient beings like ourselves) and real human emotions of love and concern; not only in a romantic sense but also in a general sense of stewardship and solidarity.

He touches on both these types of love in his verses, which feature heavy use of satire to hammer his point home. For example, in his first verse he sings:

‘Inject a vaccine and you’ll grow immunity/congratulations, you’re now immortal/everyone wants a perfect lover/to give a shoulder massage at any time’
​
Leehom’s use of satire here is almost palpable, and is clearly a critique on the concept of people using man-made means to become immortal; as well as the concept of an artificially created perfect lover. In his second verse, he uses satire again but moves his focus to how artificial intelligence and technology can be used in harmful and destructive ways, singing:

In the pre-chorus, the song’s melody suddenly goes up from a major into a minor key, intuitively alerting the listener to Leehom’s honest note of warning where he sings:

The melody and arrangement also help set the scene by constructing a monotonous, repetitive and digitised environment which is purposeful in nature; creating a feeling of discomfort in listeners who feel constricted and trapped by the sounds of technology. This feeling of being trapped is furthered by the slow tempo of the chorus and the arrangement’s non-dynamic nature. The same electronic riffs and arrangement are used throughout the entire song, with the only variation coming in during the pre chorus; adding to the ‘robotic’ theme of the song. In the melody, we can also hear that the verses and chorus use the same notes and have little diversity. Leehom’s voice seems to be the only human part of this technological tour de force, and he goes back to his hip hop roots by ad libbing, using his vocals to provide listeners with a sense of comfort and familiarity through his seemingly spontaneous use of improvisation.

The music video in itself is also an instrumental part of putting out Leehom’s message; as the constant presence of the creepy robotic doll causes lingering discomfort in viewers; time and again drawing their focus back to the ethical question regarding advancement of digital technology. The montage leading up to the EDM drop was especially powerful for me; where Leehom did a bunch of day-to-day activities with his robot wife in succession, causing discomfort to mount and mount before its release into the drop.

All in all, I think Leehom has through his new single ‘A.I Love’ once again proved his dedication to putting out good music that fearlessly critiques the advancements of modern society. Although the song may not be the poetic,  nuanced and tasteful critique that you had hoped for, some messages are just too important to be hidden deep within a song. Leehom’s decision to write this song in an outspoken and satirical manner was anything but half-hearted; although the song is aimed towards creating a digitised, cold atmosphere, ground deep into its core is a whole lot of heart, and a deep-rooted concern for the well-being of our world. Hopefully after reading this review it’ll help you better appreciate the song and the message that Leehom has so carefully and thoroughly encased within every single aspect of this piece of work.

Wang Leehom’s part 1 of his digital EP ‘A.I. Love’ is now out on iTunes, KKBOX, MyMusic, and Apple Music. Part 2 drops on the 13th of October!