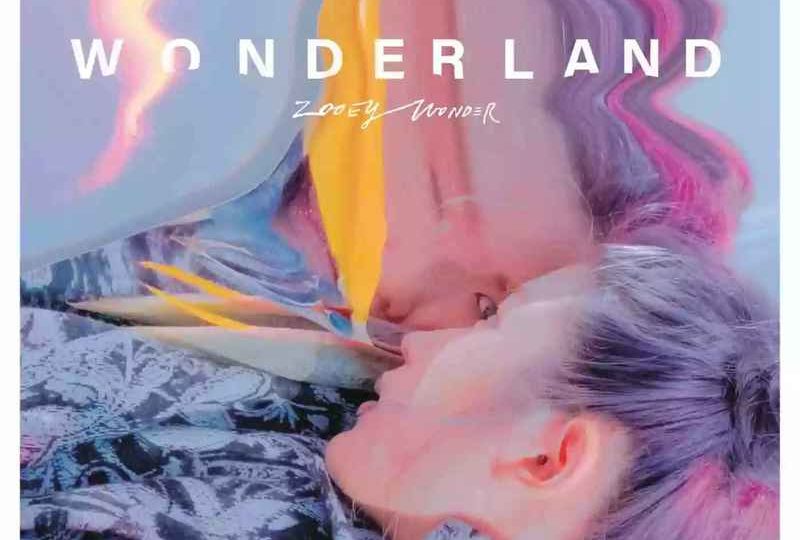 Adorned in all shades of pastel and shimmer, Zooey Wonder’s first full-length album ‘Wonderland’ intrigued me from the first moment I saw her album art. Yet aesthetics aside, Wonder’s album has been executed with a patience and wisdom that goes beyond her young years, revealing her warmness, kindness and concern for the world around her. Indeed, her personality and use of the folktronica and ambience genres are what have made her pastel-and-shimmer visuals so apt and meaningful, while they would have otherwise gone to waste on other inane pop acts.

Based around the theme of creating a wonderland, many of the songs in the album express Zooey’s hopes and dreams for the future while performing from a position steadfastly rooted in the present. While songs like ‘Fog Forest’, ‘Mermaid’, ‘Muse’ and ‘Wonderland’ have a somewhat dreamy nature to them, others like ‘Syria’, ‘Love Will Fix Everything’ and ‘Wish you a Merry X’mas’ address the terror, fear and negativity the world we live in presents. Handled with care, Zooey’s voice remains steady and warm when addressing these topics. Without placing blame or thinking about ‘what ifs’, Wonder uses her music to create a safe space for these issues to be discussed openly, coming to the conclusion that with love and a positive outlook, we can all do our part to make this world a better place.

Wonder starts the album off with instrumental intro ‘Alpha’, creating an illuminating and calming mindset and preparing listeners as they slowly transition into the album. The first two vocal tracks ‘Fog Forest’ and ‘Mermaid’ are instead dreamier in nature. ‘Fog Forest’ tells the story of a girl lost in a forest, starting with mellow, muted beats, mimicking the sounds of hesitant, trepid footsteps. This builds alongside Zooey’s strong, resilient and full vocals into the chorus where her voice holds its own against a backdrop of electronic and ambient sounds. The arrangement expands steadily in the chorus; reflecting the conflicting emotions the girl in the forest feels. On one hand, she feels lost, alone and misunderstood. But the melody follows her story as she fights back against this anger, singing ‘keep looking for a way out/I have to trust myself/Be brave and be strong/I can count on myself’.

‘Mermaid’ is another imagery-filled track; yet here Zooey forgoes the often-used tropes of two-dimensional, Disney-princess mermaids, creating her own variation to the well-loved ‘Little Mermaid’ fairy tale. Beginning with nymph-like echoes and whispers, Wonder begins singing with a sigh in her voice, telling the tale of a mermaid who gave up her fins and voice for a human, questioning whether he would in fact fall in love and remember her. I especially love the use of different textures of electronic beats to create images of black, electric undercurrents like waves that run through the song while mixing in shrill violins, whispered voices of warning and snares to create an atmosphere of danger, confusion and doubt. Though on the surface it seems like a mere story, the emotions Zooey has provoked within this song are very real and might even act as a cautionary tale about giving up parts of oneself for someone who isn’t worth it.

After the darker atmosphere created in the previous two songs, things take a more positive turn in the fourth track, ‘Winter Sun’, which just so happens to be one of my favourites. Starting with nothing more than Zooey’s warm vocals and steady beats akin to that of a heartbeat, the song immediately creates a sense of security and warmth; thus the name ‘Winter Sun’. I especially love the melody in the chorus which is catchy and allows a more resonant and hard-hitting side to Wonder’s vocals to come to the fore. The interesting and unconventional song structure that comes into play more here also works well in introducing a more exploratory element to the album. This trend is continued by ‘Chaos’, which contains very few lyrics and is more an instrumental track. Although I am no expert on electronica or folktronica, the ever-dynamic blend of sounds, some grating, others high and light came together nicely to create an organised chaos pinned down by Wonder’s full vocals.

The album hits its stride here and slows down, featuring more of an acoustic, instrumental sound than electronic with songs such as ‘Good Times’, ‘Syria’ and ‘Wish you a Merry Xmas’ in the second half. ‘Syria’ is one of several songs on the album addressing real issues that world today faces. Unlike many of Taiwan’s artists who focus on inward-looking issues, Wonder felt especially compelled to write a song regarding the current situation in Syria. Armed with nothing but a piano and her voice, the song is dark and dramatic, reprising the hopelessness that one feels in low periods. Zooey, who often furbishes her voice with the assistance of a fuzz of electronic sounds chooses to do without here; creating a stripped down atmosphere with a voice rich and raw with emotion. ‘Wish You a Merry Xmas’ which features later on in the album follows a similar formula, but this time uses a sweet, almost hymn-like ditty to accompany Wonder’s lyrics where she uses a sweeter tone to ask for God to come home. The lyrics hit close to home, as they are almost childlike, retaining an innocence which is heartbreaking but in a way soothing at the same time.

Last but not least are ‘Love Will Fix Everything’ and the album’s title track ‘Wonderland’, which to me are two songs which have a similar feel, but contain important messages and aesthetics for the album. ‘Love Will Fix Everything’ has a mellow, heavenly feel to it, as if the whole world has been covered with a rosy tint. Using steady, progressive beats to keep the song on track, the song incorporates Zooey’s positive and gently optimistic outlook into her love for folktronica and ambient music. The melody in itself is so sweet and uplifting, with beautiful lyrics which encourage one to not let anger take over, and instead to treat the world with care and love. The last track to the album ‘Wonderland’ has a similarly optimistic feel, but incorporates more energized and sunny vibes to it. The song begins with high frequency, thin beats which are paired with reverberating lower ones that bring to mind the imagery of sun appearing through the clouds. In the pre-chorus, Wonder sings ‘Ooh it’s you it’s pure’, and it is as if the clouds have parted, enabling us a glimpse at enlightenment through her music. Sometimes soft and gentle, and at other points full of warmth and strength, Wonder sings about her love for the world, enveloping our earbuds in an all-immersive experience which lifts ones’ spirits, transporting them to Zooey’s wonderland.

Although I’m not exactly an expert on electronic or ambient music and hence struggled to find the words to describe the technical details, Zooey Wonder’s music was nevertheless welcoming and easy to get into. Music is oftentimes a form of escapism, and at other times, can also be a medium for important messages. Wonder has impressively managed to make her album both of those things; creating an all-immersive experience which soothes the soul and spirit while gently putting forth messages of love, positivity and optimism in a world that needs it desperately. Although one may argue that every Chinese pop album is about love, very few address it in the way that Zooey has in ‘Wonderland’. In this album, she uses her dreamy, beautiful sound to communicate the deep, generous love and optimism that she holds for the world, reflecting an element of altruism that is lodged deep in her being. This album can be best described as a magical gem; when you activate it, you can immediately be transported into another world that Zooey has created just for you; her very own wonderland.