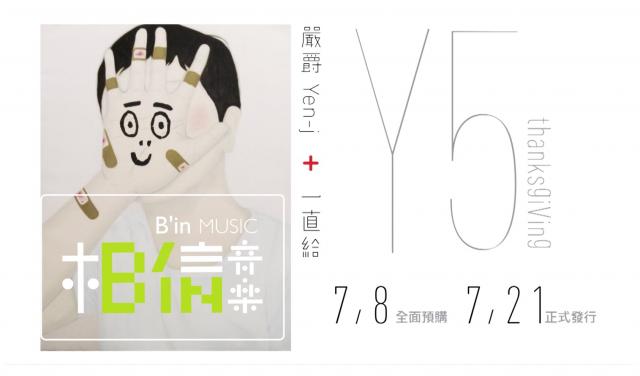 Yen-J’s fifth album “Thanksgiving” is exactly what its been packaged to be. Although reminiscent of his past albums, there’s something different about this one. Wrapped in a simple package designed with a bottle of water on the front and first aid symbols, band aids and the like adorning it, this album is everything its cut up to be (pun intended)-a first aid kit for emotional boo-boos. Returning from a two year long hiatus, Yen-J is back and ready to share what he’s learned in the past two years both emotionally and artistically with listeners everywhere.

And impressively, I have to say the concept has certainly reached me loud and clear. Before I had even watched a couple of his interviews to understand fully the concept of this album, I had already understood it only after a couple of listens. The first time I listened to it, from the moment it started till the moment the tenth track finished, I didn’t do anything except listen. For those of you who know me, I’m a workaholic who is usually thinking about multiple things at once and trying to handle them all at the same time. My album review time consists of my drives from point A to B and usually while I’m multitasking on other things. But not this time. For some reason, the moment his music began playing, it was like every single muscle in my body had released all their tension, and I let out an audible sigh of relief. After the first listen, I have to say that Yen-J fulfilled exactly what he said he was going to do, to provide his refreshing yet comforting sound that would nourish listener’s ears and minds; much like the cleansing power of water and the healing capabilities of band aids. At the same time, the album is much like his diary, charting down some of the emotional highs and lows of his two-year soul search. As an avid Yen-J fan, this album has led me to deduce with 90% certainty that he has broken up with yet another girlfriend, and has led me to extrapolate with 100% delusional conviction that I now have a chance with the creative wunderkind. (YES!)

But let’s compose ourselves for a moment and get back to the music. In describing the album I’d have to say that its sound is same and at the same time, somehow different. All Yen-J’s signature elements are in the mix, including his crowd-pleasing ballads such as “一直給Thanksgiving” , “垃圾桶Rubbish Bin” , “You are my everything你是我的全部” and “過往The past”, his Jazz influence coming into play with “沒有不可能的事Nothing is impossible” and also a bit of his penchant for hip hop and Chinese traditional sounds thrown into the mix with “輕輕Lightly”. Yen-J has always been a creative individual who has dealt with much of his music in a truly organic way which I really appreciate. From the melody to the lyrics to the arrangement, nothing sounds like its been forced out of an industrialised pump or edited to within an inch of its life.

However one thing that I felt was always somewhat lacking in Yen-J’s previous albums which was most definitely present in this album was the depth to which Yen-J has internalized each song. Previously, Yen-J had let his arrangements and music speak for him as he was somewhat a little lacking in the vocal department, but this time with the help of vocal producer Macy Chen I do see Yen-J truly testing his vocal limits. And this is what added that extra something to the album. All these songs weren’t written because there was an album in the works, but for the purposes of recording certain poignant moments in Yen-J’s life. Whereas previously I at times found it hard to piece together any relevance of the lyrics to Yen-J’s own story,  his Y5 album is completely resonant of his experiences in these past two years, infusing a mind dump of really strong tracks each with their own personality once again with his signature creative and experimental style. So I think that really, nothing has changed about the way Yen-J makes his music. It’s Yen-J himself that has changed, and this album really reflects a much deeper connection and understanding of himself.

His first single “Slot Machines吃角子老虎” is one of the more different songs on the album. Where Yen-J usually starts off with an upbeat, jazzy track, he’s come up with something completely different this time-a very upbeat and cute carnival-esque track featuring an awesome mix of acoustic percussion, country-style electric guitar and simple bass with EDM influences that are sure to get your blood pumping. At points his vocals were slightly lacking, but considering where he’s come from, a solid effort.

Second single “Something” is one of my favourites, an acoustic guitar arrangement that transitions seamlessly into a soothing blend of EDM that I truly have never come across before. Who knew EDM could be relaxing? Really digging this fusion of ‘Acoustic EDM’ that Yen-J has come up with. But if he had been a little more adventurous with the EDM elements, I would have liked to see what kinds of chemistry he could have created if he had pushed the boundaries a little harder. The lyrics are heartfelt and follow this recurrent theme of wanting to let go, but not being able to bear it in the end, something that this song’s quite contained and introverted nature captures nicely.

“Thanksgiving一直給” is another interesting fusion. Starting off with a classical piano arrangement, it kind of transitions into mainstream jazz chords before evolving again into its true form as an R n B ballad. Although a well put-together piece, I still question the relevance of the classical intro as well as extended piano solos interspersed throughout the piece. Nevertheless I really hear Yen-J’s honesty coming through his voice in this song, with a kind of inner strength that I’ve never heard before. The lyrics, written by famed lyricist Yun-Nong Yen skillfully weave the story of ones’ denial after being rejected in a way that renders it more than just an ordinary love ballad.

“Little Angel小天使” is one of the sweetest songs on this album; so sickeningly sweet that it gives me shivers down my spine. I suppose if Yen-J dedicated it to me, I’d buy it, but that superficial sounding and tinny harmonica is jarring against the ear. Despite all this, its immensely likeable melody never fails to put a smile on my face. “You are my everything你是我的全部” is another of my favourites from this album for what I thought to be a really unique verse. Verses are much harder than choruses to make stick, but  Yen-J did it exceptionally by moulding it into a brit-rock sound before transitioning into a classic mandopop ballad chorus. I have to say, the verse sold me more than the chorus though.

Thought that Yen-J has forgone his Jazz roots for this album? Well you’re wrong. They make a strong comeback in his track “沒有不可能的事Nothing is impossible”, which is a very typical Yen-J jazz-pop-rock fusion. I love the play on words within the lyrics that certainly add a very dynamic and larger-than-life quality to the song. Props also to Yen-J for conquering the extremely challenging vocals on this song with as much aplomb as he could muster. Watch out especially for that high note he hits at the end-just perfection. If he can hit that, the guy can do anything.

Hands-down, this coming track is my favourite. Featuring newcomer Peace, it is the most seamless and perfect combination of genres that I’ve heard in a while. Taking a completely Chinese-traditional melody and putting it to a hip-hop/EDM-inspired arrangement has got to be the most genius idea ever. Although the vocals are nothing showy, newbie Peace’s voice is absolutely immaculate and works well with Yen-J’s warm and honest vocals. The melody isn’t hard to sing, but I believe that no one could pull off that female part as well as her in this song. The lyrics are especially meaningful to me. Although short and simple, they touch on relationship issues rarely discussed despite the topic of love being such a hot potato in Mandopop, telling the bittersweet tale of unrequited love and how it traps us. There is even a certain level of restraint in the vocals which I really like-to me that symbolizes love being trapped ; yet the arrangement pushes the song higher and higher, creating this kind of suspenseful tension that truly adds to the song.

“Rubbish bin垃圾桶” is probably the most balladic song on the album. I can barely hear the sound effects at the start and end of the album, which I’m supposing is supposed to be the sound of paper being tossed into the bin.  Also for some reason, I just don’t like hearing the words “Rubbish bin” in a song. It’s too brash, too crass  to be used in a pop ballad and Yen-J uses it multiple times in his chorus. The ninth song on the track, “默契Chemistry” is a simple and light ditty accompanied simply by the acoustic guitar and xylophone sounds. It follows a round format where it just repeats the verse and chorus over and over, creating this peaceful and sunny atmosphere in the song which I really appreciate.

The final song “The past過往” is probably the most direct and honest in its narration. I really feel here that Yen-J is dedicating this song to a loved one, and I found that his vocals on this track were the most outstanding. Its stripped-down atmosphere borrows a little from Sam Smith, but the melody is pretty unique in its own right too. An emotionally-charged song that was an interesting, but understandable choice for Yen-J to end his album on.

Yen-J’s music is, as always pure, simple and clean. This album is most remarkable in its ability to put its listeners at complete ease, an effect which no effect has had on me in possibly years. With just one listen the pieces of the puzzle have themselves began to come together, creating a sincere narrative of Yen-J’s journey over the last two years; sharing his euphoria, his heartbreak and his ideas with audiences. Despite this album reflecting a lot more sadness than his previous albums, the album just provides me with a sense of bittersweet happiness. After all, one should be thankful to have loved and lost, rather than to have not loved at all, is it not?