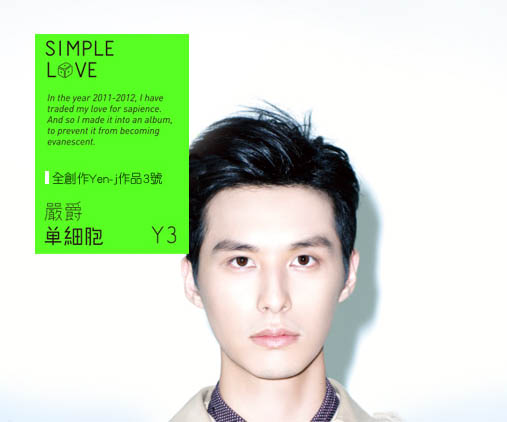 Now, the name of this album is “单细胞 Simple Love”, and totally and utterly reflects every single song in this album.  YEN J 嚴爵 cleverly provides us with a fusion of pop, rap , RnB and his beloved jazz to create a simple atmosphere, which I find ridiculously amazing. It was actually only after an interview that he explained the concept of the interview and i understood the name of the album. Come on, Simple Love could mean anything, right? But before understanding the name of the album and having expectations on what atmosphere it would take on, I could already clearly feel an atmosphere of pure simplicity, which shows how skilled he is as a producer and songwriter.The first track <世界还不错 The World’s Not All Bad> is a fusion of jazz and his signature humorous rapping style, incorporating jazzy chords and brass with a catchy drumbeat. The lyrics are kind of nonsensical, but at the same time make sense, another signature of Yen-J’s music. Very similar structure to previous hits such as <李唐娜 Donna Lee> and <困在台北 Stuck in Taipei>. I really do admire his ability to, like his idol KHALIL FONG 方大同, incorporate elements of humour into his music while cleverly acheiving his aim, shown also in <我的谢手座女友 My Sagittarius Girlfriend> where he uses 1920’s-style chord progressions (think Maple Rag) to create a whimsical but simple backing.

The third track, KKBOX chart topper <战时男朋友 Temporary Boyfriend> is simple in that it has an immensely likable melody, backed by little other than a synthesiser beat and strings to create an immense sound. The lyrics are sweet, I guess, but to shed his idol image, I think no more love songs please. But saying that, he IS kind of like an Asian male Taylor Swift, as most of his albums, this one included are written about his ex-girlfriend. But unlike Taylor Swift, he makes the lyrics of each songs relatable to all listeners, boy or girl, be it on love or anything else. The raising of the key within the song was a bit overdone, but I especially liked the bridge where he incorporated a rap into this RnB piece.

I think its really at the fourth song that the theme of simplicity really starts kicking in though, with track 4 <狮子需要梯子 The Lion Needs A Shaver> backed by either a ukelele or wood guitar, and a bass part which I feel is really integral in creating the atmosphere of this song, making it quirky and cute without overdoing it. Once again, nonsensical lyrics with a interesting meaning behind it. This is one of the songs in the album that suits Yen-J’s voice well, showing off the mellow velvetiness of his voice in the verses, and also his wide range in the chorus. Little elements such as the four part harmony to start up the last round of the chorus, the drums and vocal ‘oooos’ really help to create an atmosphere that makes me feel like I’m in Hawaii, relaxing in the simplicity of it all. Another popular hit, <打喷嚏 Sneezing> really shows Yen-J’s creativity and how he is unafraid to be different. Along with the likable melody, simplistic piano part and the strings, it’s pleasant enough until he starts singing Ha-Chiu over and over which I find quite amusing. Also, the beatbox that follows made up of sneezing noises really takes the cake for me, and reminds me of one of the works of Producer TAN HAN JIN 陳奐仁, in which he made a song about vomiting. Well hey, they’re both reflexes right? But I really loved it, it was original, creative and surprised me while actually showing me that beatbox could be incorporated and still keep the atmosphere simple and pure.

Track 6 <火上加油 Adding Oil To A Fire> is my favourite song on this album. I can’t really put my finger on why, but I do appreciate his use of little elements altogether that build up into this awesome, fantastic toe-tapping rhythm. The percussion builds up and incorporates shakers, as well as Yen-Jercussion as I call it, where he uses some of his own sounds eg, sneezing to add to it. The electric bass doesn’t have a fancy arrangement, but does the trick, as does the synthesiser. I think this song is actually the epitome of simplicity, because all these clever simple little elements were put together to make such an awesome song . I also love the talking/rapping little bits that also add to it and make it that much more special. I could lsiten to it over and over to catch all the little parts of it, also owing to the likable melody line.

Track 7 , the title track of the album <单细胞 A Simple Love> still don’t 100% make sense to me as I haven’t had a proper look at the lyrics, but like the winning formula of <打喷嚏 Sneezing>, Yen-J keeps it simple with a likable melody, piano and strings.

The 8th track is my second favourite, with a really interesting style to it. I really do appreciate the lyrics for this song, as they talk about how two ex-lovers should interact if they meet each other again, revealing from Yen-J’s point how much he misses her, and their memories together. The chorus gets me everytime, as the chords on the guitar give it a really retro vintage feel when paired with the lyrics. The little claps used for rhythm with the “da da da” yenjercussion make it extra special.

Track 9 <吾在场证明 No Alibi> is an especially heartbreaking one, and I feel that the words and the melody goes so perfectly together, moulding themselves together so that they should be inseparable. No one should ever change the lyrics, they are so perfect in my opinion. Yen-J ‘s voice also sounds relly nice in this song and once again he keeps it simple while at the same time giving each song a different atmosphere. This time he uses a more jazzy piano style with snares on the drum and cymbals and I do like the harmonies in there as well. This one is a real surprise; no wonder it became a chart-topper too.

<悲观乐观 Optimism And Pessimism>, the last track is actually one some fans may have heard before, which he played and did a music video for at his concert for his first or second album. But this time, he’s changed it totally by making the guitar finger plucking style more bossa-nova and adding a synthesiser to it to create a more soothing atmosphere.

P.S I think his pronounciation has improved a little already, which is good! But there is room for improvement….

All in all, this is a really good effort for his third album, it is creative, and absolutely impressive in its clever simplicity. So, I’ll keep it short and SIMPLE. Ha.