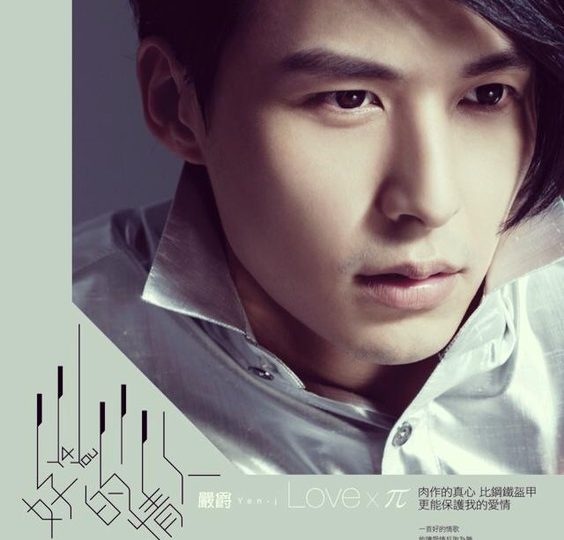 YEN J 嚴爵 never fails to surprise with his fourth album “好的情人 Love x Pi”, in which he returns to his Jazz roots a little more while continuing to create unique pieces with love and creativity that have taken the Taiwanese music scene by storm. Out of his four albums, I feel that this one is the most successful, with four songs making it onto the top 10 of the KKBOX charts without compromising musical or lyrical integrity in any way.
<貳零零零年 The Year 2000> is one of these songs, and is a adventurous fusion of dubstep and chinese traditional music, featuring the sounds of the Erhu. Within this song Yen-J addresses the Kpop revolution that has swept the world, and urges us to go back to a time where music was meaningful and I guess less visual based than what we see today, with the Kpop groups, as well as music in general. I love this song for its creativity and also because I myself share similar views on this issue. Music and visual arts may interact, but music cannot be compromised by making the visual element more important either.

Surefire hit <好的情人 A Good Lover> is a play on his hit single from his second album, “好的事情Good Things”. From this song I can hear how much effort Yen-J’s put into training his voice, as he is now able to master such ballads, with great emotion and respectable vocal technique. As always with ballads, Yen-J doesn’t overdo it by using a simple classic arrangement but with lyrics that provide one with vivid imagery and a overwhelming atmosphere of heartbreak.

His duet with <潔癖 Cleanliness> with MAYDAY 五月天 was one of the highlights of this album for me, with lyrics skilfully written by A Shin that are still able to convey the creativity that Yen-J always injects into his music. Who know Obsessive cleaning could be turned into a song as sweet as this? Like the song and its lyrics, the arrangement is clean and refreshing, with simple sharp drums and guitar riffs that cut through cleanly. Very cleverly done, an amazing job by Yen-J and Mayday as I have never seen a song that puts its message through so clearly in both the lyrics and through the arrangement! Yen-J’s sweeter vocals when paired with A Shin’s unique ‘sour’ vocals create a really nice combination that is simple but effective.

But my favourite on this album will have to be <π Pi>, just purely because of the way that the melody speaks to me.  Usually dubstep isn’t my thing, but when used properly and effectively as Yen-J does, it really does make a good song even better. I think Yen-J’s found a winning fusion within this album as touched on before, that of dubstep and chinese traditional as used again in <π Pi>. With a hard-hitting rhythm and Yen-J’s honest and down to earth vocals combined with the heavenly guzheng melodies, who wouldn’t love this song? Even though I am not a big fan of maths, the lyrics to this song are creative and written with the precision and logic of a mathematician, with a large dose of love!

Yen-J tries his hand at RnB with <Everyday>, using a simple snare and keys pairing, leaving his voice to take centre stage. Despite the simplicity of it all, this song is filled with an inherent sweetness, like a profession of love with just the right amount of warmth and sophistication. It also makes me think of weddings for some reason, but nevertheless Yen-J sings it with conviction and passion, which makes it even more touching.

In <超級巨星 Superstar> Yen-J creates a wonderful fusion of Jazz with RnB and a hint of syths, funk and acapella. It is totally unlike anything I’ve ever heard before, so it was a exciting adventure for my ears! I love his use of vocal backings as I think it softens the funk and RnB feel and lends to it a dreamlike state. However I feel that within this song, Yen-J would do well to work on his vocal dynamics a little more.

<勝券在握 Winner> featuring MAGIC POWER MP魔幻力量’s TING TING 廷廷 is a skilful piece featuring in the genre of rap, allowing both of them to relay their stories as artists in all their honesty to listeners.  Yen-J excels in making good music that aren’t all ballads and songs about love, and this is one of them. Ting Ting’s rap has a really nice flow to it as does yen-J’s and it is nice to see two different rapping styles interact in such a way.

<至少我有我 At Least I Have Me> is also one of my favourites on this album; after all the exciting new fusions that Yen-J provides us in his albums, he always knows just how to bring the mood back down. A simple catchy guitar riff and percussion do wonders in the hands of Yen-J. The honesty and comfort of this song has a soothing and healing effect, perfect after a bad day. It is an affirmation and a recollection of what Yen-J has gone through on his musical journey. It’s different from some of his songs where he specifically goes through stories within his life, but is like Yen-J confiding his ideas and giving them to fans and listeners. He doesn’t just give out random inspirational quotes, he does it all from his personal experience and creates a really different and wonderful experience for listeners by creating a more intimate bond between singer and listener.

Yen-J’s Jazz standard <沒有你的日子的我 The Days Where I Am Without You> is impressive, a classic Jazz creation by Yen-J and his production team. I think this is a real milestone, because I’ve only ever seen singers who profess themselves as Jazz musicians in the Chinese music industry do Jazz covers, but never actually create Jazz standards such as this, especially in Chinese.

Yen-J’s album was a pleasure to listen to, but the only flaw is that I don’t really get the concept of the album. Its English name is “Love x Pi”, which has nothing to do with the Chinese name of the album “好的情人 A Good Lover” which makes things a little confusing. But he’s provided a huge range of genres and influences and opened my eyes yet again with his boundless creativity and genius melodies, so I can’t complain! A pleasure to listen to, and I hope everyone will enjoy it as much as I did.