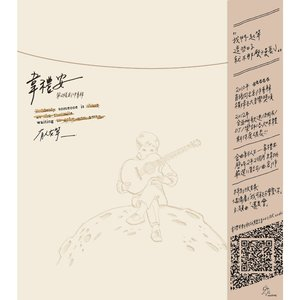 Album Name: Someone is Waiting 有人在等我

Many albums have similarities in terms of a whole concept that applies throughout, like a theme such as love or romance. Others have a certain genre, such as rock or RnB. However, with WILLIAM WEI 韋禮安, I classify his latest album by a unique riff on the guitar which he uses throughout the album. In the folksy <月球 Moon>, where the lyrics and his use of minimalistic backing creates an atmosphere of singularity, as if I were standing on the moon myself. This riff is also exhibited in other tracks such as <心碎心醉 Heart Drunk Heart Break> where it is used in more of a bossa nova manner, to bring instead a refreshing tone to the song.  The lyrics  written by Wei go really well with the chorus, especially at the “心醉心碎…＂ which sounds to me just like the pulsating of a heart, throbbing with love or heartbreak. Wei, as a songwriter who primarily uses his guitar uses it a lot more within this album, which I see as a level up from his last album, more of a discovery of himself and what he wants as a musician. The genre set is also a little different from his debut album, a little less enthusiastic and a little more reflective and calm.He shows this in <累 Tired Impressionism>, one of my favourites for its stripped down use of percussion and acoustic guitar, leaving Wei’s voice to take the spotlight while leaving the atmosphere just so, a heartfelt goodbye,bittersweet but yet aloof. He also moves towards the jazz and funk genres in <印象派, which maybe reveal the more playful side of his creativity, where his use of his vocals really become an instrument in the song, in terms of his tone, pitch and texture, which is rarely seen in artists and is something I really like about Wei.

The track <這不是愛情 This Isn’t Love> also shows his use of vocals as a real instrument, but this time with minimal backings and a ukulele to create a playful and bohemian atmosphere, building up to a full bodied track when the electric guitar comes in, molding perfectly to the song.

<One More Try>, another Jazzy number shows Wei’s attempt at a fully English track (lyrics written by him!). I really love this track, as the lyrics are unique, not boring and stereotyped like most Western mainstream tracks, but creative and refreshing. However, his voice does seem to lose its strength a little near the end, as he tries to cover it with improvisation but comes up a little short. But all in all, a great song, and perfect pronounciation, which is really rare and appreciated in the Chinese music business. By me,anyway.

The title track <有人在等我 Someone Is Waiting> links all the songs and genres of this album together to a central theme: that someone is waiting for YOU, not anyone else, you. You are loved and wanted, and as Wei has left his fans waiting for such a long time, he wants to share all of himself with his fans , through his music and lyrics. This song gives me a feeling of warmth and comfort, with his velvety voice and simple guitar instrumentals.

<We’ll Never Know> was the first track of the album that I had properly listened to, and fell in love instantly. The lyrics are so deep and meaningful, telling you that you’ll never know if you don’t try.