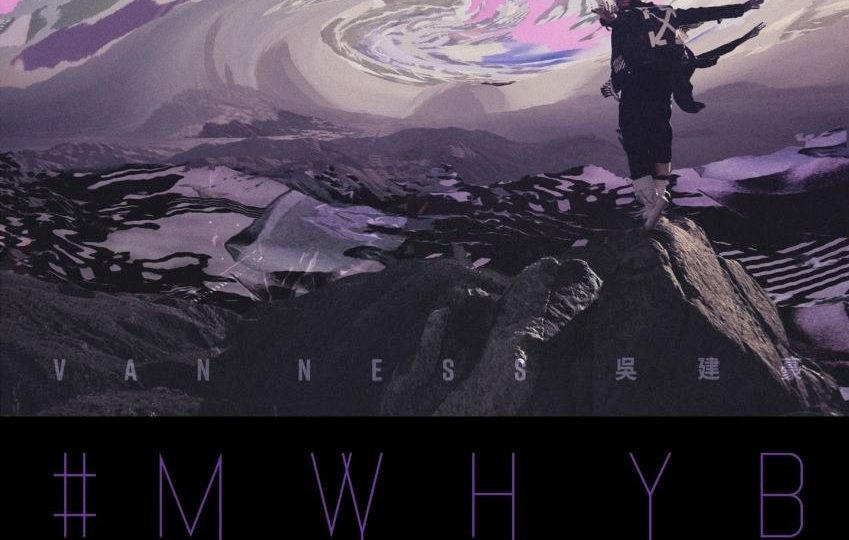 Interview material taken from: Jamie Deer (Yahoo Streetvoice)
​
​​It has been three years since Vanness Wu’s last album, and this time around he is back with his eighth CPop album, #MWHYB. It is nice to see Vanness back on the scene as the only member of F4 still actively making music after all these years. He has certainly reinvented himself time and again, and he continues to do so in #MWHYB.

The unique hashtag title translates to “Music Won’t Hurt Your Body”, which in many ways personifies and depicts the overall theme of this album. In that, if I had to summarize #MWHYB in one sentence, it would be an album filled with music that simply makes you feel good. It contains tracks evoking different feelings for its listeners, including sentimental, upbeat dance and futuristic sounding feels. Aspects of the album also encourages the listener to be open in exploring and appreciating different genres of music such as Funk and Soul.

In a Chinese interview with Jamie Deer for Yahoo Street Voice, Vanness said “a lot of this album was organically produced, without much restraint or hard structure”. He says “his new way of doing things is to be comfortable and appear natural in whatever he is doing.” In a lot of ways, I think the audience really gets to witness this idea in #MWHYB.Encouraging listeners to expand their musical taste:

One message Vanness is trying to convey with this album is to “not limit yourself to a certain type of music” and I think the songs in “Boogie” and “Boom” do a great job of promoting that concept. Not only do they reflect back on some of Vanness’ earlier musical influences such as James Brown, often known as “The Godfather of Soul”, but they also showcase Vanness’  passion for dancing, which was evident to many fans during his early days with F4.

“Boom” is a nice elegant mix of Soul and funk music, with a touch of hip hop, R&B along with an ear-catching rap segment done by Khalil Fong. It promotes a similar ‘let loose’ feel as in “Boogie”, but lyrically I found the song to be more inspiring. As it metaphorically uses the idea of dancing to capture the imagination of the audiences. I feel that it personifies an important message, reminding us that sometimes it is necessary to be less consumed by our daily anxieties, and rather be more spiritually connected and focused on our deepest desires and ambitions instead.

​Listening to these two songs makes me appreciate the genres of Soul and Funk music a lot more.The most impressive thing I found about this type of music is the dancing associated with it. I noticed how it is a huge element that goes along with the feel of the music, giving every beat and riff the attention it deserves.

In relation, the choreography put together by Vanness in his music videos was on beat and impressive, to say the least. In “Boogie”, I loved the throwback 80s theme with the “Back to the Future” intro, along with the rooftop and disco scenes which resembles and reminisces nostalgic Michael Jackson feels for me.

Similar, to the structure of his previous albums, there are a few slower sentimental songs with more traditional Cpop melodies. They include, “All Of My Life 愛是你 愛是我“,  “Faded Picture”, “屬於你和我之間的事” and “One Last Smile 下一首情歌”. Music-wise, nothing in particular stood out to me but the songs do give off nice tender feels and are perfect for days when you in the mood for something slow and sentimental.

A few songs in this album falls into the category of what I like to call “futuristic sounding” songs. In that, they feature modern sounding electronic instruments and accompaniments, somewhat similar to what we hear in today’s top 40 music. They include “玻璃屋 Glass House“, “IKYK” ft Meng Jia and “Bass Gun”.

Out of those songs, “玻璃屋 Glass House” stood out to me the most. It is a track with a blend of R&B mixed with futuristic sounding bass patterns and funky sounding synthesize layers. I really like the song because it gives off a dark but relaxing vibe, a rare combination I didn’t expect to hear in this album.

Lyrically, it includes a rather deep message that is delivered in a simple, expressive manner. From afar, it seems like this song serves as a form of therapeutic relief for Vanness. As he expresses some of his more personal feelings about life, along with being in the public spotlight. The details regarding those issues are not entirely clear, but it create a nice touch of mystery,  that intrigues the audience to want to revisit the song ,over and over again.

There are a few english tracks in this album including; “#MWHYB” and “Westside” feat. BrandUn DeShay.These songs cater more to the taste of western listeners. As a Chinese growing up in North America, I appreciate the inclusion of these type of tracks in a Chinese album. I feel naturally drawn to them ,as they create a sense of familiarity, that resembles some of the music I’m used to hearing in the Western world.

​It also culturally showcases the diversity amongst Chinese artists and in Vanness’s case, songs of this context allows him to proudly represent his ABC heritage to the world of Cpop. I thought “Westside” did a decent job of depicting what the laid back California lifestyle is like. Imaginatively speaking, the song was able to transport me back to California, in the late 80s and early 90s, experiencing life as Vanness or an other American born Chinese growing up during that time.

Overall, I thought this album was well done, offering diversity to please very different musical tastes. Comparatively speaking, it is not as electronic sounding as the “Different Man” and less western sounding than “V.Dubb”. I think listeners who will enjoy this album the most, are those who listens with an open mind and is looking for a “feel good” experience .

As for listeners who like to search for a deeper meaning or interconnection among songs, they may feel like there are many inconsistencies within the album. In that, they pull the listener’s interest into multiple directions, as several songs in the album promotes very different ideas. Therefore, I can see some people criticizing this album for that reason.

Nevertheless, Vanness did not pretend to create an album which was particularly consistent, instead opting for more of an eclectic variety of styles. Therefore, for his purposes and aims, Vanness has done a stand-up job with this album.

I am aware that some people aren’t fans on Vanness’ music, simply because they don’t think he has the best vocals. That is fair, but if they focus on that one element alone, they are probably missing out, a whole lot on what he has to offer as an artist.  Fans must realize that Vanness wasn’t originally discovered as singer, as he has come a long way from his early acting days, to making eight Chinese albums and many other tracks in Kpop, Jpop and English.

We should also recognize that, as an artist Vanness offers the rare combination of being able to sing, dance and rap. In my opinion, he is one of the best C-pop dancers of his generation, and can use his dancing talents to help express his music better. Which in comparison, offers a lot more versatility and showmanship than other artists in the market. Perhaps fans who didn’t give Vanness’ work a chance in the past will gain better appreciation with this new perspective in mind.

Finally, as an artist with a western upbringing , it can be harder for Vanness to decide what the type of songs to include his albums. Regardless, I think he has done a valiant job, bridging gaps between Eastern and Western musical genres, in a way that is uniquely his. In the process, he is also able to create a solid album that shows off his unique energy and spunk.