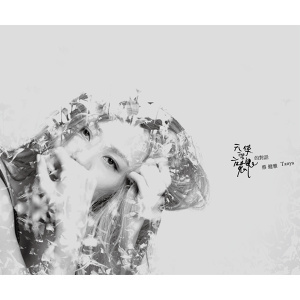 This album is one of my favourites that TANYA CHUA 蔡健雅 has produced. This is because I’m finally able to see her through her music. Her ideas, her  feelings, what she’s all about. In her previous album “说到爱Talking About Love”, although it was a great album, I still felt that she wasn’t being as honest with herself. During the period of promotion for that album, she describes herself as feeling afraid and being unable to breathe, even during her performances. In this album, she’s been able to come to terms with the devil inside her, and with the angel; creating a balance between the two. In expressing her deepest fears through this album on love, and life, I feel that Tanya’s finally able to find peace within herself. This album is practically flawless; raw and reflective, but yet there’s no skimping on the arrangement or any self-pity. I’m really proud of what Tanya’s achieved in this album, and extremely impressed.<單戀曲 One Sided Tune Of Love> is one of the songs on this album that I am constantly and always fascinated by with every listen. The arrangement and symbolism behind this song is so perfect that I suggest looking out for it with each listen. With skilled use of percussion, Tanya replicates the peacefulness of the ocean, ebbing and flowing. Adding on the bass, she creates an imminent sense of danger and stripping down, she replicates the calm before a storm. And then it comes. In the chorus, the echo of voices, synthesiser and drums are like waves crashing down, as she sings, as if she is drowning in the waves, and then falling, falling into the depths of the ocean. At the climax the rhythm becomes syncopated, amplifying and multiplying the voices like waves crashing relentlessly, creating a sense of panic, a desperate loneliness even for the listener. The beautiful lyrics also allude to and create a stunningly haunting imagery of the ocean as a metaphor for Tanya’s loneliness. It’s absolutely magical how Tanya is able to pull off a combination of instruments, an arrangement that could make listeners feel exactly as she  feels.

<費洛蒙 Pheromones> is a song Tanya collaborated with friend WU QING FENG 吳青峯 on (They also collaborated on <極光 Aurora>. Tanya’s sultry vocals work brilliantly in this song, encouraging,  teasing and nudging, brought on even more by the lyrics “要不要为我犯个罪 Want to commit a crime for me”. Her voice beckons in the chorus, like a sirens’ call, pulling listeners in. The simple snares add to the seductive atmosphere of the song as do the guitars. The song almost has an atmosphere of a stupor, brought on by love, arousing, heightening, pleasuring, as only the feeling of love can do. The bitterness of the guitar against Tanya’s falsetto is a great combination that makes the song a little dangerous, but also for the most part enticing.

The title track <天使與魔鬼的對話 Angel vs Devil> has that same seductiveness from the previous track, but also a dark humour that wraps itself around the song, from the playfulness of the percussion to the ragtime piano part and the brass instrumentals. But this song above all pushes Tanya’s vocals front and centre, where she uses her creativeness and her signature voice to  produce techniques that work so well with the song and yet leave goosebumps on  my skin.

<Easy Come Easy Go> featuring MC Hotdog sounds exactly like the name suggests. When I hear this song I relax and ease myself into the RnB synthesisers and let Tanya’s voice take me away. I’m not a particularly big fan of MC Hot Dog, but he gets the job done in this case, with a great flow that pairs off exactly with the bohemian atmosphere of the song. The song sounds like what I want to feel on a Friday evening sitting outside watching the sunset; a warmth and happiness that leaves just as abruptly as it arrives. Tanya embraces the devil in her and abolishes old ideals to hold on to love when the feelings have long cooled off.

But the seventh track <墜落 Falling> is the one that really  breaks my heart. For me, lyrics are a straightforward and honest confession on Tanya and a problem that has plagued her for years. The lyrics are simple;  bitter at times but always truthful, not promising a happy ending by sunset.  The bareness of the atmosphere makes Tanya’s voice sound so small, so alone.  For once, its not her leading the band, but she creates the illusion that they are surrounding her, eroding a hole in the ground for her to fall into. ‘Give up on her’ she says, ‘let her fall’. This song isn’t a call for pity or a gossipy tell-all, but Tanya’s lyrics have truly touched my heart through her raw honesty.

<被馴服的象 The Tamed Elephant> has clever, clever lyrics written by Kang Xi Lai Le host Xiao S, who has proven herself not to just be the nosy rude chatterbox that she embodies on the show. The song has a really circus-like atmosphere, but not going over-the-top with the cheesy stereotypical sounds of one, instead choosing to go with classy brass and a playful rhythm. The song is said to be a metaphor for the reality that is the entertainment industry, taming artists into no more than circus elephants, causing people to feel lost and trapped.

<十萬毫升淚水 Ten Thousand Tears> is another song in which Tanya bares her soul, using beautiful imagery and words that cut deep into your soul. If it was anyone else singing this song, I would probably think they were self-pitying bastards, but with Tanya, her voice surrounds me and fills me with the pain that she feels, the emptiness and the longing for just one more night. This song, other than <墜落 Falling> is the one that makes me the saddest on this album, as Tanya just sounds so small, but yet so beautiful in the way that she crafts her pain into true art.

<Keep Breathing> is a breather of a track that reassures us all that everything will just be okay. I link this song back to Tanya’s experience of not being able to breathe on stage, and it reassures me that this song is her way of saying to her fans that maybe someday, she will be okay. The arrangement of this song is like the patterns of breathing in, and out. In, and out, with the percussion eking out a rhythm that never ends and keeps going. Until the end of the chorus, it stops for a second, just like how someone might take a big breath in, and start to live life all over again. The lyrics are comforting like none other; Tanya shares her wounds and her worst nightmares with us, and let us know that being honest with the other half of ourselves is the best solution.

For me, this album is an emotional rollercoaster with a lot more downs than there are ups. But sometimes you just have to do what you have to do. Tanya’s taken arrangement to a whole new level that I have never experienced before with the way that her arrangements actually add so much to the meaning of the songs and the lyrics. Being able to see her as she is also really makes me happy, because now I hope she knows how much her fans care about her. Also for integrity purposes, being yourself is always a really good thing. I’ve never seen anything like this album before; after so many years in the game, Tanya’s still at the front pushing out new ideas, and new ways of making music. It has been my privilege to listen to this album, and I wish and pray everyday that Tanya still tells herself to Keep Breathing.