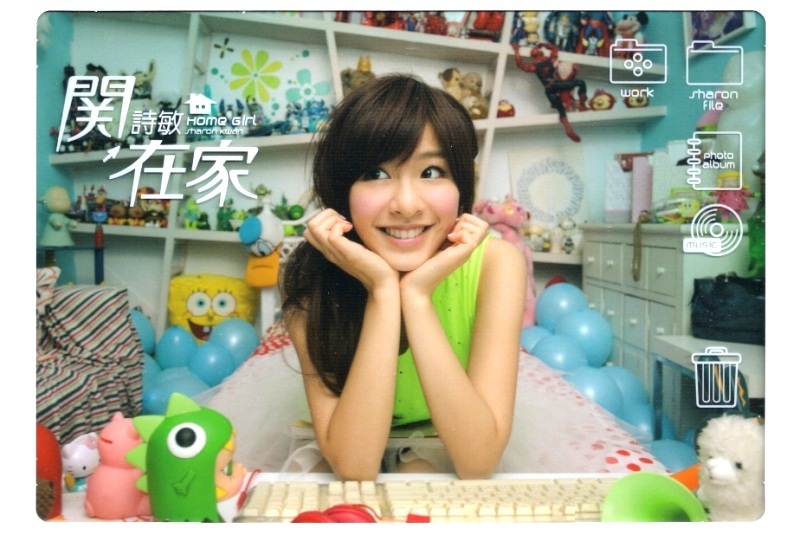 I know I’m probably a little (or a lot) behind on reviews but I’ve recently acquired Sharon Kwan’s debut album <關在家 Home Girl>, which was overall a well-coordinated album with a lot of effort and heart put into it.  Boasting collaborations with the likes of the legendary DAVID TAO 陶喆 who has taken Sharon on as his disciple (he wrote the first few tracks on this album), as well as works by LALA HSU 徐佳瑩, PEGGY HSU 許哲珮 as well as a slew of accomplished songwriters and lyricists, it is definitely an album that I found a worthwhile listen.The concept of this album is simple, but put together cleanly throughout; and is based on Sharon’s experiences as a person who is used to doing everything at home. Being schooled at home, she learned about the world from a very unique perspective which she showcases throughout this album. Most especially in the song <關在家>, with a catchy and bright melody written by DAVID TAO 陶喆, the lyrics take a very different approach to teenage romance and addresses the notion of facebook relationships in an innocent and fun light, which I guess is what it’s all about anyway. It is a play on both Sharon’s surname, but also based on the fact that she was homeschooled and was a humorous and adorable attempt at reflecting on today’s social networking society.

She also addresses other aspects of life from a very cute and domesticated point of view, with her first single <快遞甜心> which alludes to convenient home deliveries which are common especially in Taipei, while putting a really fun spin on it. Her style is quirky, with the use of adorable but genuine backings, such as the 1920s esque- “chu chu bon bons” and the simple guitar riffs that accompany it.

What I’d like to emphasise especially about this album is how genuine it is. Sharon’s unique vocals are always front and center, and she sings each song with a genuine happiness and bubbly quality that really makes it an enjoyable listen. Even for those indie lovers out there who’d probably overlook her because of her cutesy image should give her a listen and I guarantee, you will be surprised.

Two of my favourite tracks are <毛毛雨 Drizzle> written by Lala Hsu and <半個地球的挂念>, written by Peggy Hsu. These tracks are somewhat of a diversion from the previous more upbeat tracks, but they really do show off Sharon’s versatility as an artist as she takes on very different singing styles that require a complex play on dynamics that she masters in both these songs, bringing out the emotion to a T. Both have lyrics which are wonderfully written, with Lala’s having an atmosphere of enchantment and mysticality as well as sadness surrounding it, while Peggy’s lyrics hold warmth and bittersweet sadness, reminding us of all the things that our parents have done for us.

<First Love> shows off Sharon’s high vocal range in a classic RnB song, which has a great melody written also by DAVID TAO 陶喆, and which showcases her dolphin pitch, making me respect her even more as an artist.

Overall, listening to this album was my pleasure, and I hope that you all can find the same happiness in her voice as I did!