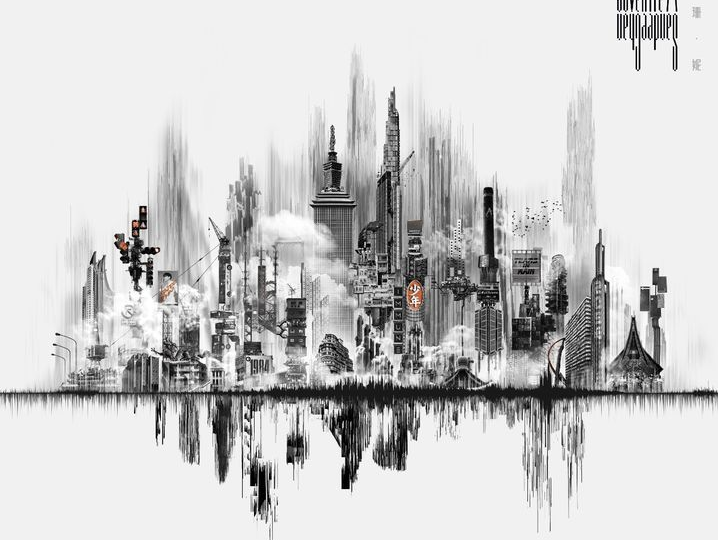 Where Are You Headed? 你要去哪裡
​Fair Lady Works Shuttle 玉女穿梭
​Be An Extraordinary Ordinary Person 成為一個厲害的普通人

Taiwanese singer-songwriter Sandee Chan 陳珊妮, now in her 25th year in the entertainment business, has earned a dedicated army of followers through her persistent and defiant artistry: consistently defining her records with a thematic concept, and through all stages of the creative process take a hands-on approach in formulating the eventual product. Whilst flitting in and out of musical genres, it is the guitar-led grunginess of her instinct that has prevailed from her first record to today.

The last time we heard from Sandee was on 2017’s critically acclaimed Martial God Cardea, an oft-melancholy war cry against modern technology. Her 13th studio album Juvenile A sees Sandy continue to push herself musically, developing a concept that sits naturally next to its predecessor.

​​The title stems from Japanese anime Akira, in which ‘Project Juvenile A’ was a research laboratory where a post-apocalyptic Neo-Tokyo was studied and observed. Inspired by the thoughts of American writer Isaac Asimov, it revolves around his belief that 2019 would be a watershed year for humanity where it would be a future dominated by technology and robots. Sandee takes this concept and reframes it, looking at the world of 2019 through a post-apocalyptic future.

Introduction-come-homonym ‘惡靈武士2054′ is ethereal yet unnerving, dating the year in which we are viewing 2019 from. Closing the track with the phrase Forget today, will be forgotten tomorrow – Sandee frames the record through the inability of humans to either look too far in the past or future. We then lunge straight into 70s-inspired British prog-rock Where Are You Headed? 你要去哪裡?, cleverly employing a retro sound to discuss the very contemporary problem of fake news and the hindrance of television, internet and social media on our critical thinking ability. Comparing humans to zombies, the song is less of a passive experience and more attempting provoke a reaction out of the listener at the issues facing the world day.

This is followed up by Uncanny Valley 恐怖谷, a jazzy mid-tempo criticizing society for imposing unfair standards on women, poking fun at attempts to photo hop and apply filters to pictures in order to create a new online reality . Repeating the satirical advice of just fake it till you make it, Sandee also offers the sound advice of understanding the different between illusion and reality.

​​Similar in theme, What Will Hannah Say 漢娜怎麼說 focuses on the emotional turmoil of cyber bullying. Sandee is able to take this example however and use it to shine a light on how society often shames an individual who is different. We can see it not just in the school yard, but in the persecution of minority groups across history.

Continuing the topic of satire, 35 is both a clever take-down on the concept of the surveillance state, a nod to the years Sandee has spent in the industry, and an insight into how men and women are treated differently as they get older. The track – based on the fact it is 35 years after George Orwell’s take on the encroachment of an authoritarian system of society – is a stark reminder of how technological developments have brought us closer to this dystopia than ever before.

Another song relating to age, Kidult 惡童 manages to both be funky yet make the listener feel ill at ease, seeing Sandee lament on cross-generational divides. Sandee manages to eloquently discuss how older people often misunderstand the actions of the young, leading them to lash out at these differences, rather than try to understand them.

The album also shines in its more subtle moments. On album closer Be an Extraordinary Ordinary Person, inspired by Taiwan’s 2018 referendum on marriage equality, she describes in vivid detail the heartbreak of powerlessness, capturing the essence of youthful depression, yet ultimately voicing her support to continue to make the world better.

​Composition構圖, whilst brief, evolves over time from minor piano ballad to dramatic mid-tempo exasperating about the battle between love and indifference in interpersonal relationships. Musically cheerful Pavlov巴夫洛夫 meanwhile hides a sorrowful sentiment of living vicariously through what we see on the internet and apps.

With each song exploring the concept in different ways and a high standard apparent throughout without sacrificing experimentation in the process, it’s difficult to be critical. At an absolute push we could say that there is so much detail in both the music and the album as a whole, that it creates a barrier to the average listener to fully engage and appreciate the songs for the level of detail that they entail. However is that lack of knowledge that Sandee herself is using this record to criticise?

Juvenile A is a masterclass in thoughtful and socially relevant pop music. Cleverly intertwining musical trends from the past 35 years to frame contemporary topics that will shape our future, Juvenile A may be a complex record, but it is a necessary record. Most importantly however, the concept doesn’t drown out the quality of the music, with all 11 tracks being intricate and delicate pieces which continue to open up on repeated listens. Juvenile A may arguably the most intelligent record of 2019, but there is no argument in saying that it is 2019s most important.