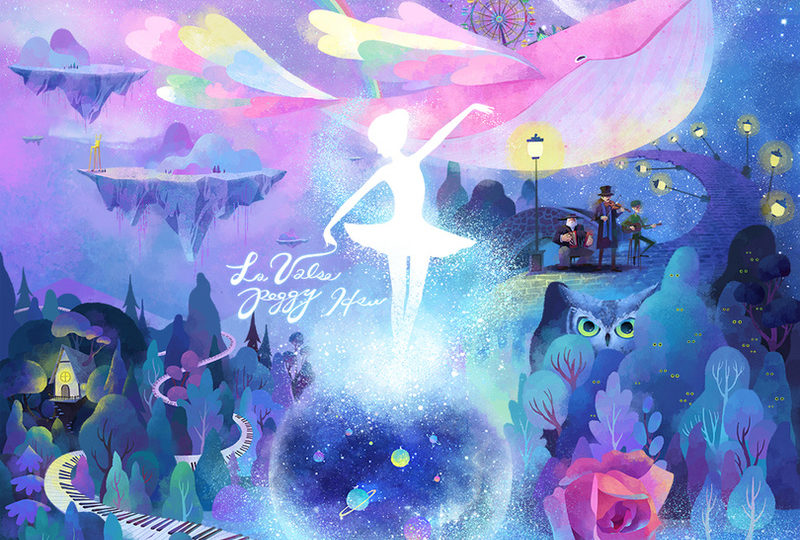 After a long break from the music scene, Peggy Hsu is finally back with her latest album <La Valse>, a whimsical and enchanting take on the Waltz, both on the dance and the musical genre. It’s a conceptual masterpiece; with each and every song written in the 3/4 time which is signature of the Waltz musical genre. Like the variety of dances that the waltz embodies, from the scandinavian waltz to the Valse Musette, Hsu’s album defies the expectations of listeners by presenting a diverse selection of styles in the 3/4 time signature, from ballads to soft rock, lullaby-like tunes to chanson-inspired pieces. But staying true to herself, Hsu seamlessly weaves her own signature disney-like magic throughout the whole album, adding her own personal touch of whimsy, childlike wonder and bittersweet nostalgia to each song within the album. This album is Hsu’s own interpretation of the Waltz; a dance that expresses to her and to her audience that pure and simple desire that we’ve all had since we were just children-to be free to dance, to sing, and to explore the world.But Hsu shows that growing up isn’t all fun and games, with a moral behind the whole story, cleverly and intricately placed at points throughout the album-we all have to grow up sometime and face reality. Time will always continue moving forward, as we all know too well, but whenever it feels like reality’s too much to handle, Peggy’s album will always be a safe haven you can turn to.At intervals in the album, Peggy’s little instrumental interludes including the <魔法舞鞋 Magical Dancing Slippers>, <玩具華爾滋 Toy Waltz> and <大提琴夢遊 Cello Dream> help us to transition from stage to stage with her on her magical, mystical and musical storytelling adventure, which all started with a pair of magical dancing slippers…

<Tippy Toes> is a song that seems to be made of all things that little girls (me included) love – sugar, spice, and everything nice. A simple piano arrangement with added magic borrowed from the sounds of the flute and the tinkling of chimes carry the song high on the pink clouds that appear when you close your eyes and listen to this song. Peggy’s bell-like vocals echo the yearnings of the little children inside us, of wanting to learn, being happy, sad, dancing and embracing all the new sights and smells of the world around us. I especially like the classical influences of this piece, and the simple, yet beautiful lyrics that not only create a world of enchantment for us, but also reminding us that although fun and play is well and good, there is a reality waiting for us when the song finishes, ending it on a bittersweet note.

Both <假如眼睛看到的一切都是我的 If Everything I Saw Was Mine> and <轉圈圈 Pirouettes> have an overwhelmingly french feel to them. The former, is filled with an atmosphere of a Parisian Cafe, while continuing the story of the little girl who put on her magical dancing slippers to see the world. In Hsu’s whimsical story, the little girl imagines, ‘what if everything I saw was mine?’. The song contains sweet little anecdotes, such as ‘even christmas will be mine’, showing the propensity for imagination that each and every one of us once had, and probably still have inside of us. In this song, we see the world through a child’s eyes, reviving in myself a sense of childlike wonder that had been buried somewhere deep inside of me.

The next track, <孩子王 Child King> is one of my favourite songs on the album, with a simple piano and violin arrangement, Peggy’s voice strikes deeply into my heart, as she sings “I can’t help you grow up, my dear”. Peggy enters her story and sings a song to the little girl, telling her through her heartbreaking lyrics that she may be able to teach her to sing, and to teach her to have fun, but she cannot teach her how to love, or how to cry. The lyrics are so touching in the intimate way in which they are written, like a letter to a loved one.  Hsu’s creativity knows no bounds as she accurately reflects the painful transition between childhood and adulthood in one song; soothing ones’ fears with her lilting voice, while doling out last words as she bids farewell to the little girl who will eventually grow up and leave her childhood fantasies behind. The song and it’s message lingers long after the song is over, and is truly is a piece that skilfully represents so accurately an important turning point in a person’s life.

After that kind of full-on emotional labour, Peggy lightens the mood with a cute waltz piece, <我們一起睡覺 Let’s Sleep Together>. Now get your mind out of the gutter! Peggy truly takes a risk and returns to the pureness and innocence of a child, creating an atmosphere of all things light, fluffy and warm, with a hint of magical  fairy dust hidden in the chimes and brassy pomp of the arrangement. The lyrics are sweet and full of a simple, glowing happiness that she replicates amazingly, transporting me with her into her happy little bubble, even if it’s only for a few minutes.

Among the collection of gems that Peggy so thoughtfully presents in front of us, each like a sparkling jewel waiting to be picked up and examined thoroughly, is her collaboration with CHEN HUI TING 陳惠婷 (Tizzy Bac) <愛是… Love Is>; showing that Peggy’s magical world isn’t just made up of all things sugar and spice. Huiting was a perfect choice for the song, using her unique vocals to bring a little more grunge to the piece than Peggy herself could muster. Lost in their harmonies, this is one nightmare that is kind of worth having, a dark exploration of love in its glory and downfall.

Another gem not to be missed is <時間博物館 Time’s Museum>, which is simple, but filled with warmth and glow of memories past. The ticking of a clock fades to reveal numerous stories that unfold before your eyes as the song goes on, filling you with a nostalgic yearning for memories, but Peggy leaves us the comfort that the time museum will be holding these memories for us always. Creative lyrics which build up a whimsical and enchanting metaphor of a museum of time which I really appreciate.

Probably the only thing I could find wrong with this album was Peggy’s voice, which seems to be somewhat lacking in vocal technique. She’s spot-on in pitch and tone, but some variation and elaborate use of her voice to further embody and inject emotion into the album would make it even better. But for now, the childlike and simple quality of her voice still does an adequate job in moving listeners.

I expected nothing less from Peggy than a well-made, exceptional album, and that is what I got, and much, much more. A walk down memory lane, a theatrical masterpiece, a fairytale with a twist; this album has it all. Even down to the adorable packaging of the album (it is designed like a music box, complete with lid and shiny ballerina) this album is chock-full of Peggy’s childlike wonder, an enchanting listen from start to finish.