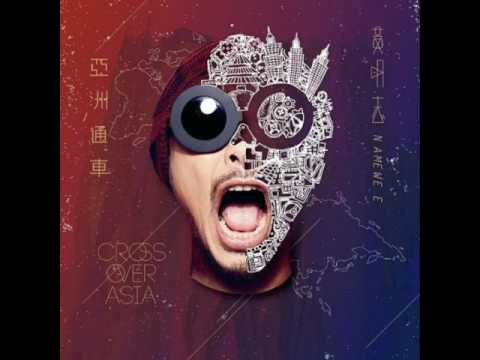 I have always found Namewee 黃明志 to be an interesting character. He has in the past fearlessly and constantly criticised the Malaysian government through his music, dares to create works bordering on sexually explicit-yet also shows himself to be a filial son through his constant references to his mother. The Malaysian singer-songwriter-rapper particularly piqued my interest when he released his latest ‘Crossover Asia’ album which has since seen him nominated for ‘Best Male Mandarin Singer’ at the 2017 Golden Melody Awards. Given that the album has a focus on promoting harmony and cross-cultural collaborations all across Asia, it was certainly a project right up my alley.

Although in the past, most Mandopop cross-cultural collaborations aim to bridge the two extremes-the East and the West, Namewee has done things a little bit differently this time around. Born and raised in Malaysia, he has decided to focus on addressing the relationships that exist between Asian cultures, igniting collaborations with Taiwanese, Malaysian, Indian, and Chinese artists. Thus, the album boasts a wide and varied range of collaborations, including with the likes of Wang Leehom, YouTube sensation Lindsey Stirling, Joyce Chu, Nine One One, FiveFortyTwo and Vinz’.

Given the change of focus from promoting Chinese music to Western audiences (which often has to do with promoting racial equality), to a more focused scope on Asian music industries, the focus here is instead on promoting greater understanding between Asian cultures. This is a refreshing take that to my knowledge has never been attempted before. Despite the relatively high proportion of Malaysian artists who come to Taiwan to further their careers, they often attempt to assimilate (as do many foreign artists) rather than allow their backgrounds to shape their work in unique ways. Here is where Namewee’s efforts are especially commendable. In all his music, he has never once tried to hide his Malaysian accent; instead embracing it and allowing its rough-around-the-edges nature to add another layer of meaning to his rap and vocals. Furthermore, many of the songs on the album, such as ‘Stranger in the North’, ‘Little India’, ‘Mother’ and ‘Wake Up’ address in detail Namewee’s own uniquely Malaysian experiences. By fearlessly owning his heritage and using his confidence to articulate it, Namewee has gone against negative stereotypes of Southeast Asians as ‘hillbillies’, packaging their experiences as unique and valuable especially due to their valuing of multicultural experiences, tropical environments and family ties.

One must-mention track is the chart-topping hit ‘Stranger in the North’ featuring Wang Leehom. I had goosebumps the first time I heard this song and even teared up the first couple of times, especially because of how accurately Namewee recounted experiences and emotions that I had previously felt while far from home. Having Leehom on the track, an artist who is the poster boy for cross-cultural collaboration deepens the meaning behind the song even further. On top of the obviously catchy melody, the arrangement is simple yet so perfect. The simple, homely notes on the piano start the song off on a nostalgic note because launching right into heavy beats that drive the song forward, egging on Namewee’s spitfire rap to evoke even more meaningful imagery within the song. The lyrics evoke striking imagery through Namewee’s skilful depiction of scenes and memories that are familiar to many city slickers; working hard to support their families, leaving their home country for more opportunities, and feeling isolated and alone in new places. I found the imagery of the coconut trees, ergoutou wine in hand and the bowl of hot soup especially powerful, reflecting especially accurately the conflicting emotions of motivation, homesickness, isolation, fear and melancholy that many who are chasing their dreams far from home feel. ​​

Another standout track on the album for me was ‘Mother’, which incorporated a smooth R&B/hip-hop style with a traditional Chinese flair, and even a little of a Peking Opera feel which is especially reminiscent of Southeast Asian Chinese culture. Once again, Namewee’s imagery is powerful as his recounts his own experiences which his mother supported him through; from his student days all the way until he moved to Taiwan. Once again, his heritage is evident in the lyrics as he mentions his mother’s traditional Nonya food, the use of Malaysian slang ‘Paisi Gina (meaning Bad child)’, and his move to Kuala Lumpur. Collaborating with his very own mother Ma Guang Fang on this song, her motherly and traditional style of singing also adds to the warmth and moving nature of the song.

The track ‘Oh My God’ which he collaborated on with Taiwanese rapper Nine One One should certainly be analysed for its controversial nature. The single landed Namewee in a whole heap of trouble when it was first released in 2016, due to the Malaysian government accusing him of blasphemy for mentioning Allah. Namewee on the other hand, asserted that all he was trying to do was promote religious harmony. The song is essentially a high-power, EDM-influenced comical medley of focusing on different religions including Buddhism and Islam; first starting with a Chinese influenced verse about Buddhism, then switching into a supposedly Malay accent to refer to Islam. Once again, the fact that Buddhism and Islam were the two main religions that he focused on within the song, here Namewee once again allows his Malaysian heritage to influence his works in a way that was interesting, refreshing  and got peoples’ attention.

Yet another track I particularly enjoyed from this album was ‘Little India’, a song on which Namewee collaborated with Indian artists Vinz’, Jeyaganesh and Kubhasheni. This song is interesting in that it centres on Little India, a community which is present in many countries including Malaysia rather than India itself. This distinction is probably once again drawn from Namewee’s own experiences, rendering it more credible. On top of this, working with Indian artists also render the use of Indian-influenced arrangements more authentic and in good taste.

Coming on fast and strong with the Bollywood theme, Namewee adopts an Indian accent as he hilariously sings in English and Chinese, rattling off a list of culturally unique things about Indian culture, such as their worship of cows, their use of hands to eat rice and many others. Although humorous, it is important to note that I don’t think Namewee’s lyrics were offensive; they instead portrayed Indians in a vibrant and jolly light in a way that many Chinese-language artists fail to address. Featuring a strong beat to update the arrangement, after Namewee’s bit helps to acclimatise the audience to the Indian theme, the various Indian artists are featured and allowed to shine on their own terms. This song just puts me in such a good mood and I truly recommend it to everyone for a fresh new listening experience!

​Through his ‘Crossover Asia’ album, Namewee has completely broken down preconceptions of how Southeast Asian artists are supposed to package themselves when they enter the Taiwanese music industry. So many doors have opened for him due to his fearlessness in pursuing his authentic, uniquely Malaysian perspective. He is one of the first Southeast Asian singers who has been so fiercely proud of his heritage; so much so that it has completely changed my own conceptions of what is possible for these artists on the Chinese-language stage. Although in the past, I have been mindful of my Singaporean accent especially when I speak in English (and sometimes in Chinese), Namewee has proved an inspiration in this respect.

By owning your heritage and packaging it in a way that is tasteful yet true to yourself, the possibilities for cultural exchange and understanding are endless. The only thing I will have to say is that I do know Namewee releases music at an almost breakneck speed, so I would say I hope that he could work on creating a little more polished works in the future; perhaps putting more care into the finer details in his arrangements and being a little more experimental. Although the album was a pleasure to listen to, the arrangements seemed to be more thrown together in the heat of the moment rather than carefully thought out in terms of the different textures that go together and the symbolism of the elements within the arrangement. I suppose in a way that is Namewee’s standout point; that he is a rather rough personality with a big heart. But always something to think about for next time! All in all, for anyone who doesn’t know too much about Southeast Asians and their culture, Namewee’s album would be a great way to get into it.