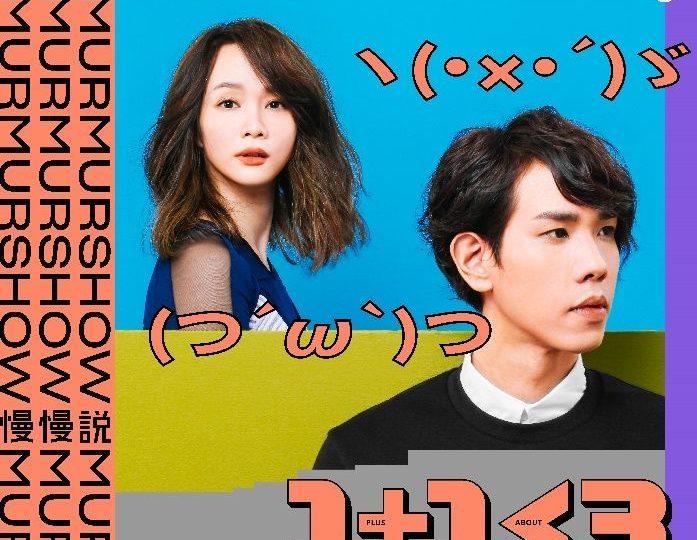 Golden Melody Award-winning duo MURMURSHOW 慢慢說, whose music has previously been described as being akin to a nourishing bowl of warm soup, have built themselves a reputation for being able to make listeners feel as if they’ve stepped into a surreal and magical musical world. Freda Li 利得彙 and Jack Shen 沈志方 are finally back three years after their last release with their third album 1+1<3. However after listening, will people be feeling <3, or more </3?

1+1< 3 as a concept takes a look at contemporary society not only in terms of love and relationships, but how these can be framed in societal dependence on new technology and using symbols to express feelings and emotions. Taking the title as an example, 1+1 is a mathematical equation equalling two, implying a connection between two people, objects or concepts combining to become something greater. Following this with <3, often used to symbolise a heart, implying that this connection is formed and bonded by love. However, is love really that simple? Can this equation really embody the nuances of life, or can a symbol truly convey a thousand words? In order to explore this, each song is also given a title comprised entirely of symbols which attempt to convey the respective songs’ lyrical content.

The album kicks off with electro-swing rock track God-like Teammate 神隊友. A highlight of the album, it is both joyous and refreshing, bizarrely ushering in the album in with a kazoo before flitting between tempos, genres and vocal styles. The song titles relates to playing a video game, playing alongside great players who are not afraid to be great despite a fear of losing. Whilst you may wish to be this kind of player and admire them mid-game, it is an ethos that we should practice in life; to bravely continue pushing forward despite setbacks and difficulties.

Bubbly and cheerful, R&B-lite number <3 is, unsurprisingly, overflowing with saccharine whilst simultaneously evidencing how symbols truly lack the power to convey what words do. Freda considers what she will write to the object of her affection, yet ultimately settles for <3, which is too simple for the emotions she is feeling. The message of the song is that people should be more courageous to show their true feelings and not hide behind meaningless symbols.

Another standout is Thunderstorm雷陣雨. What at the outset seems to be a standard alt-rock song actually grows in temper and ferocity as song progresses, as does a storm as it increases in strength before it ultimately fizzles out. The instrumentation also changes often and rather than work as separate layers, feel as if they are acting in conversation with one another, creating the illusion of rain as the crashing drums symbolise the thunder and lightning. In what may very well be the albums standout track, MURMURSHOW exquisitely traverses the fine line between eccentricity and finesse in a truly creative and subtle way.

R&B-tinged Jing 井  is a humorous critique on how young people are more concerned with how their lives appear to others and how to generate more followers and likes than truly experiencing life and the beauty around them. As the saying goes, if you don’t post it on Instagram, did it really happen (If I only use photos to explain my complex self, then where is the real me)?

A lot of songs have taken inspiration from R&B on this record, yet moulded to fit their soothing alt-rock style. Unlike a lot of R&B-influenced music coming out over the past twelve months however it’s less of a contemporary style, and more of a mid-00’s neo soul influence. This is evident on songs such as The Signs 自導自演 and Will You Miss Me, whilst on the other end of the spectrum you have much more familiar Mandopop territory on tracks such as beautiful ballad Self Directed Heartbreak 自導自演.

Whilst there’s nothing to particularly grumble about regarding the record, there is a point that should be raised, namely Jack’s deliciously warm vocals which are seriously under-utilised. Freda’s vocals are of course a delight, but Jack’s really elevate it to the next level and add extra depth wherever they are found, and it feels a shame that he isn’t featured more often. Whilst you can have too much of a good thing, on this record we don’t get enough.

His vocals are no better utilised than on the laid back neo-soul inspired Sleepless in Theater失眠電影院. His rich and silky tone is the star of this bass-driven sleek and sexy number which is somehow able to musically encapsulate that 3am feeling of insomnia.

On 1+1<3, MURMURSHOW have built upon their well-established sound, maturing their style without losing any of their uniqueness or charm. Indeed, if you’ve enjoyed their previous ventures, this will absolutely not disappoint you. Framing this album in their discography, it feels as if it meets at the middle-ground between their debut and sophomore. It’s not going to convert anyone previously unsure of them, but when you do what you do this successfully, it doesn’t matter.