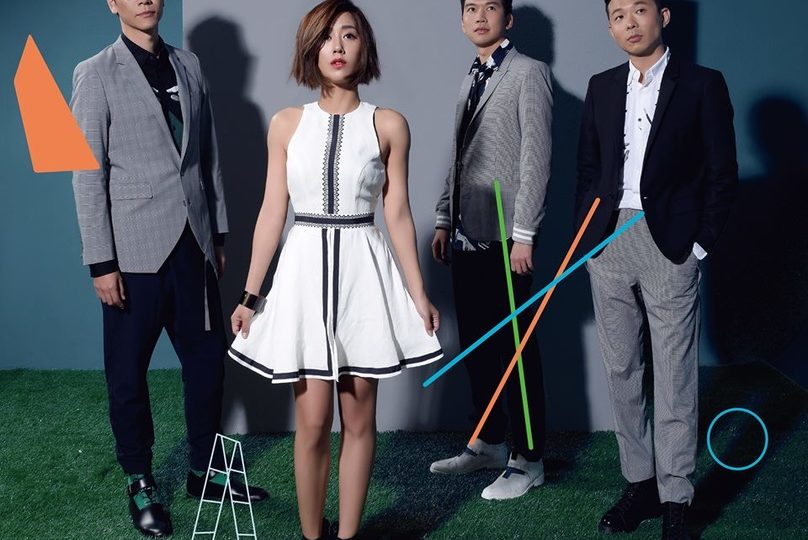 This is a 1+1 band, all members come from different professions. In the daytime they all have their own careers they are working hard at; but all are connected by their love for music and thus created ‘Men Envy Children’. The meaning of this name reflects on a hope all members have towards their music; hoping that it will always be innocent and inquisitive, vibrant in imagination and allowing life to be full of energy-just like children.

With the energy of Mayday, the relevance of Sodagreen and the warmth and honesty of S.H.E, new Taiwanese band Men Envy Children may have seemingly popped up out of nowhere, but it’s guaranteed that they’re here to stay. Their debut album ‘Everything’ features a hearty serve of pop-rock and is spiced with heart-warming and relatable lyrics which have swept Taiwanese audiences off their feet. The band have the sound of experienced pros-after all, they are all experienced players in Taiwan’s music and arts industries. You COULD say that they’re all moonlighting as artists on the side, but it sounds kind of out of place when you find out that by day they are for the most part high-flying executives. Indeed, Men Envy Children are a band that are in it purely due to their longstanding passion for music. Going by their band name, MEn Envy Children (or MEC for short) see themselves as a bunch of individuals who aim to inject the playfulness, the innocence and most of all, the capacity of children to dream into their music. But this album is far from child’s play. Produced and mostly co-written with acclaimed Mandopop producer Skot Suyama, immensely likable melodies, moving arrangements and intricate, beautiful yet hard-hitting lyrics have certainly made MEC a hit among Taiwanese audiences, and I believe that it would resonate well with international audiences too.

Revolving around the topic of work-life balance, their first track ‘No Time沒空’ features a quintessential western ‘band sound’ (think Paramore, Fallout boy), something that once put into a Taiwanese context makes it one hell of a unique listening experience. An unrelenting rhythm and heavy electric guitar and bass arrangements aren’t enough to faze lead singer Mify’s resonant rock goddess vocals which cut through the fuzz clean as a knife. i especially love how the lyrics address the issue of guilt in the workplace, and the peer pressure that comes with leaving work on time or even early. I like how it’s a wake up call for those stuck into their routines; that if they continue giving themselves the excuse that they’re too busy and lead a stressful life, then at the end of the day the only person they’ll be hurting is themselves. I find it interesting that the lyrics written by band leader Vince are like none I’ve ever seen. Most songwriters are caught up in discussing the beauty of love, the abstractness of life, but what Vince has done here is to find the beauty that lies in reality, something that is a real standout point for me in this entire album.

The second track ‘Love in the sky天降辣妹’ is one of my favourites for its unique fusion of Chinese traditional melodies and an awesome hip hop vibe, all based on an unconventionally acoustic arrangement. Even down to it’s song structure the song was yet another completely new listening experience for me, with the song using an english rap by Skot as a hook for the song, yet featuring Chinese rap verses performed by Vince and the chorus sung by Mify. Starting off with a breezy simple acoustic guitar and Mify’s sweet, breathy vocals, in the next moment Skot lets rip with an explosive, funky rap before transitioning cleanly into Vince’s Chinese rap, and even featuring a short little narrative in the song before easing into the sweet sunny chorus. I felt that on top of this, Vince’s rough, yet interesting voice added another dimension to the song. A complete masterpiece in my opinion.

The third song, ‘Everything’ is one of the only balladic tracks in the album. Absolutely heartfelt in every miniscule component, the song just gave me the feels from the first moment I heard it. I especially love Mify’s sweet and throaty vocals in this song, embracing me in a comforting hug. The lyrics sing of the precious moments in life being everything, and making up for all the other hardships that we face. A bittersweet yet motivating song, the arrangement fits the lyrics like a glove, swelling into multiple voices at every ‘Everything’, and using precarious violins to reach a dangerous, yet ever forward moving climax in the bridge, where it speaks of dreams being too far and reality causing us to cry. A song truly filled with love and care in every aspect.

A darker track, the fourth song ‘My dear baby我的親愛小孩’ has lyrics by Vince that move me to no end. Like a letter to an innocent child, the song apologises for bringing them into a world fraught by such dangers and recklessness. The lyrics and the deepening urgency of the melody come together to envisage an imagery so strong that it requires no music video for me to see the effects of pollution, starvation, poverty and racism among other issues featured strongly within the song. A heavy metal-influenced track, the song is an unrelentless guilt trip (but in the best way possible), with heavy grounded beats like the crashing of waves that remind us of what we have done to this world and what we’ll be leaving behind for future generations.

In the fifth track ‘The picture in my heart 心中的圖畫’, things take a turn for the better with Vince showcasing his versatile lyrical abilities once again, this time creating a narrative about a boy called Ming, and follows his background, his struggles but most of all his enviable optimism at the future to come. I love Skot’s sunny melody and the transition from an acoustic arrangement to the subtle solidity of a bass that reflects for me the notion of moving steadfastly forward, pushing through obstacles to reach the ultimate dream and picture that everyone holds in their heart. A immensely dynamic song that takes you through the story’s ups and downs with the building and receding of instrumental layers, reminding through every element that life may be unfair at times, but it all depends on what you make of it.

The sixth track ‘This is not the love I’m looking for我要的愛不是這樣’ is an interesting fusion of sultry, seductive jazz with heavy metal and country rock elements. Perfect to tell the story of a woman stuck in a relationship that she never wished for. Anxiety, femininity, frustration and depression create a unique mix of emotions to be portrayed within the song. Unfortunately I felt that Mify’s vocals were a little too one-dimensional for this song. Other than attempting slight alteration in the softening of her voice at the start, it was overall inflexible and didn’t capture the emotional nuances of the song as well as it should.

The same can be said for ballad ‘Love rainy days 最愛雨天’ which also required a rather seductive and layered voice whereas Mify’s voice is more clear and amped-up than suitable for such a song. Furthermore I felt that the rock-inspired arrangement was left feeling a bit empty and could have been fleshed out either with backing vocals or with more improvisation on Mify’s part. The seventh track ‘This Embrace這個擁抱’ which is written by singer-songwriter Elisa Lin (as was Love rainy days) is a nice rock ballad, solid in its execution and overall a pleasant listen.

‘Everything’’s ninth track ‘No Pasa Nada沒關係’ hits us up with a dose of much-needed stimulation, starting off with a punk rock anthem feel that gets you up on your feet and headbanging within seconds. With rebellious lyrics that reject society’s repression of individuality and freedom, the song is filled with the atmosphere of unity and passion for life that leaves you feeling rejuvenated and motivated immediately afterwards. Tenth track ‘It’s up to you’ is another rockin’ headbanger that exudes positive vibes from start to finish. With a catchy and playful ‘catch-me-if-you-can’ drum arrangement, Vince takes the lead in this song with his in-your-face rap that skilfully uses colloquial conversational slang to address listeners directly, leaving an inspiring wake-up call to get up off your feet and to follow your dreams despite office bosses, late hours at the office, so on and so forth. After all, isn’t this what has driven the band to continue playing music this whole time? You should really listen, you know.

Finally, the last track ‘Goodbye再見’ features a wide-open orchestral arrangement that is bittersweet as it is motivating. Saying goodbye for me is a really hard thing to do, but I love how the song always reminds us that we must always be thankful for every person we’ve met on our journey, and to have no regrets when it’s time to say goodbye. The lyrics really hit a soft spot for me, but yet it was the optimistic and energetic melody and arrangement that held back my tears. Likewise, it’s all reflective of there ALWAYS being something to look forward to. Not saying goodbye, but always saying see you again.

This album review was a long time in the making, because I forced myself to take time out to just sit down and read through each and every one of the lyrics. I’m glad I did, because not only was the album amazing musically, but it also put through a very strong concept of life in many aspects for me. It is not just made up of some abstract imaginings, but instead a real down-to-earth, analysis of life as it is for normal individuals like us. It made me feel fear, sadness, happiness, sadness all in the space of eleven tracks, and even led me to question my direction, my life and my 20-year-old existence. Ah, life. But I digress. One of the most topical and moving albums I’ve heard this year, a wonderful wonderful debut by Men Envy Children. Remember that name, because you’re going to be hearing a lot about them in the future, I just know it.