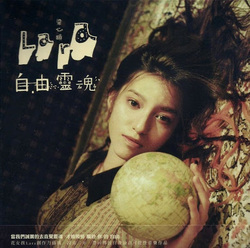 With the noted folksy influences that you may expect from her music, it is easy to misconstrue Lara’s music as like many other folk artists who may be seen as pretentious, annoying, hipster etc. But unlike them, Lara’s music is heartfelt, decidedly unpretentious and down to earth with a touch of whimsy and quirky humour. Her album concept is flawless, choosing the simple theme of freedom drawn into its many aspects and tied together by her meaningful and inightful lyrics which are always a pleasure to chance upon. Lara embraces the folk genre with her second release as a solo artist, losing slightly the renowned childish and sweet quality of her voice to add new dimensions and textures to her voice, giving both old and new listeners a pleasant surprise. Lara isn’t just another one of those cutesy Kawaii singers who slowly lose their charm and fade from the music industry. She has shown her strength as a singer with professionalism, ambition, and her creative and unique ideals which make her a unique find and a perfect example of the long way the chinese music industry has come. I believe that in her new album, she has finally found her niche and hope that this certainly continues on!This has to be possibly the best album I have listened to in a really long time. It is chock full of Lara’s ideas and opinions on freedom, which is the best part of her music! As a talented lyricist, she plays with this concept in so many different ways; freedom in relationships, freedom on journeys, freedom in change. This album has truly opened my eyes, and she is one of the artists that I respect most for her different opinions. More than once, my friends have said to me, “this
doesn’t sound like normal Chinese music…”, and I think that Lara is one of the artists that would appeal to wider audiences. She is part of the new generation of Chinese music artists; gone are the bubblegum pop one hit wonders and generic love songs, she is a singer that will; in one song make the people realise that the Chinese music scene is changing more and more everyday.

The first track in this album, <Talking> is an introduction to the album concept. What do we use to constitute and decide our freedom? Our mouths of course. We use our mouths sometimes to procrastinate, or sometimes to make important decisions. It all starts with talking, in this demo track where Lara actually plays the guitar herself. Like a lot of her own works, the melody incorporates a little bit of humor in it; a little bit of attitude, a little bit of sass.

<自由灵魂 Free Spirit> is the first single of this album, and when I heard it, it was a pleasant surprise for me. After Lara’s debut album, where she delved more into folk and new age genres with her relaxing style of music, this grungy indie rock style is a 360 degree change for her that, might I say, was executed with flawless perfection. The classic combo of electric guitar and drums, when done with a hint of synthesizers and interesting vocal backings makes for a entirely new atmosphere; a little playful and a whole lot of freedom. The lyrics are straightforward, doling out anecdotes like freedom being a kind of energy, encouraging each and every one of us to follow our own paths in life to free our spirits. This sing also reflects the versatility of Lara’s voice; with her doll like tone and pitch you may not expect much from her, but she proves it all wrong in this new song where she adapts a new style of singing.

<Darling> is my favourite song in this album, which starts off with a stripped down, simple guitar plucking technique which builds up at the chorus with addition of other instrumentals, to create a refreshing folk rocksy feel. The real magic of this song though, lies in Lara’s voice. The backing vocals are also simple, but effective in creating just the perfect atmosphere for this song. The most central part of the lyrics goes : “darling this time I will love you more honestly, taking off my mask”. You can hear it in Lara’s voice, the raw emotion in this song; the honesty and sincerity that she sings this song with. The highs and lows of her emotions, everything that she sings and stands for is out in the open with this song, her voice perfect in its genuinity.

Lara tries her hand at an English track <Goodnight>, and the lyrics are just perfect. The dreamy imagery of the lyrics speak of setting a lover free, and now missing telling them goodnight.  The arrangement of this song is wonderful, with a simple plucking on the guitar adding to the hazy and romantic-esque atmosphere of the song. When I close my eyes and concentrate on the song I am transported to moonlit skies, to a whole new plane of spatiality.

<苹果 Apple> is a really cute, whimsical song about the energy and feeling of being in love. I think it captures the feeling of romance perfectly but it just has that hint of sweetness coupled with inescapable happiness. The banjo instrumentals gives this song the little kick it needs that makes you sit up and listen. The snappy snare part and maraca percussion makes the atmosphere that much cuter in a really understated way. There is also a feeling of impulse and of course freedom in this song, brought by Lara’s voice.

<蜕变 Change> is a song that has a feel that is reminiscent of a song in Lara’s last album called <Crescent City>. ‘Why?’, one might ask. Well, Lara has collaborated with the same person who wrote the last song, who in fact is her father!  I think that’s pretty cool and I see where Lara gets her unique artistic style from. This song has a little bit of a Spanish flamenco feel to it, but is also coupled with an indie rock feel. Genius producing on the part of Producer WILL PENG 仔仔, who is also known for working closely with OLIVIA ONG 王儷婷 and is also best friend of ANTHONY NEELY 倪安東.

<碎片 Shattered Pieces> is one of the two songs in this album written by fellow NAN QUAN MAMA 南拳媽媽 Band mate CHASE CHANG 張傑. The melody is really easy to follow and has a subtle underlying melancholy to it. I love the lyrics for this song, the metaphors that Lara uses is really creative, likening relationships to glass vases too close to the edge, feelings like houseS; this song is full of them. In the chorus there is a line that translates as “memories are like invisible shards that are embedded in a certain part of you” and I feel that this is the line that she draws the emotion from. The emotive qualities of Lara’s voice are really special and I’ve found that in this album. Like ANTHONY NEELY 倪安東, she has the ability to show her emotions clearly through her voice, but what she can do that he can’t, is that she as a lyricist pinpoints the certain emotion and theme; in this song the feeling of being scarred and having shards embedded in oneself. Every note she sings is filled with sadness as if with every breath she takes she is inflicted with stabs of pain.

<骨头 Bones> is a really unique song, I just can’t seem to place the genre of the song. The only track on the album produced by Lara, it has its own unique arrangement and atmosphere. A little bit of cuteness and a little wit. It seems to be a fusion of jazz and folk rock, which is refreshing to hear and unsurprisingly enjoyable. The lyrics are meaningful and have really taught me that sometimes, you just need to sit back and let your bones breathe.

<Gentleman> is one of my favourite songs in this album; it was originally found in Producer GARY YANG 楊瑞代’s 2012 album <I’m Not A Gentleman>, but Lara has changed the lyrics, very successfully I say, to suit the concept of her album better. She has totally captured the essence of the song both through the lyrics and through her voice. She sings of a lover who doesn’t know how to show his love, and the exhaustion that one feels in this situation is represented so clearly in her voice. Gradually, throughout the song, her voice, though clear and beautiful holds a tinge of tiredness and exhaustion, especially meaningful in the last line where she says “但你已太晚” meaning “You’re already too late”.  Absolutely wonderful.

The last official song in the album , ＜舒适的监牢 A Comfortable Jail> happens to be Lara’s favourite song on the album, and I can see why.  It shows off Lara’s voice in a new dimension, and the lyrics are the best that I’ve ever heard. It is the song that is most core to the concept of this album, freedom, and totally questions the rules of society and how we see the world. Lara has outdone herself in this aspect. It is relaxing, with an indie folk feel to it.

The hidden track <灵魂自由 Spirit Free>, is a new take on the first single <自由灵魂 Free Spirit>, with more of a general rock feel to it, and once again tests the limits of Lara’s ability. She sounds totally different in this song and I really love it.

To reiterate, I am totally blown over by this entire album. It has an amazing concept that has opened my eyes to the world, and was pleasurable and enjoyable in every aspect. I am so happy to see Lara rise to new heights that even I have never before imagined, and hope to see this continue for her future works. Perfection.