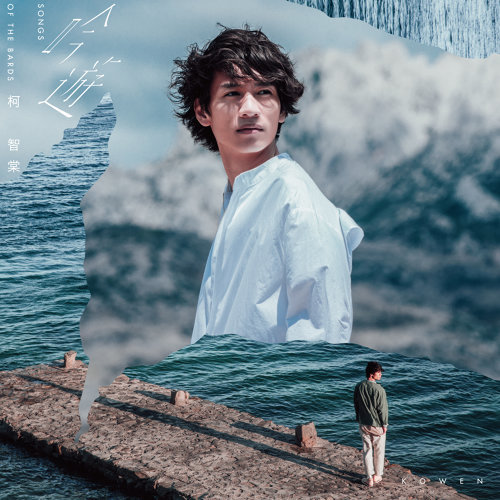 After his melancholic first album, drifter and singer-songwriter Kowen sets the tone with works that are slightly more optimistic. With those low, nuanced vocals and that existential thoughtfulness that is always present in his music, his second album ‘Songs of the Bards’ isn’t exactly clap-happy; yet Ko seems to have injected a teeny dose of adrenaline into his original ambien-induced sound; leaning this time more towards his brit-rock influences; and showing off his artistic capabilities in the process.

Upping the ante with English brit-rock track ‘Man Without A Mission’, the folk/rock artist kicks off the album with a running start. Literally, the song kicks off with a full arrangement; drums keeping the pace while squealing, dynamic guitar licks fill the air. ‘Man Without a Mission’ screams Coldplay for me by way of its religious connotations; but of course with a massive dose of Ko’s signature wanderlust added to the lyrics.Empowering and uplifting; this is Kowen’s theme song. As a man who often describes himself as being without a mission (see our interview with him), he shows that there’s nothing wrong with that. Why not just enjoy the journey, and let the pieces fall where they may? You Are, the other English track on Ko’s album is, on the other hand; more reminiscent of his stripped down melancholic works from his first album, but either way a welcome addition to this album.

His second track ‘Need No Salvation無關拯救的事’ is more of a throwback to the sounds featured in his debut album; but stays true to the album’s more upbeat tempo; slow-building but bringing fevers to a pitch in due time with drumbeats and lucid licks from electric guitars. Slightly reminiscent of a favourite from his first album “You don’t really want to wander你不真的想流浪”, I like to see this song as a continuation of the same narrative.

​While one is about coming home; the other is about departure and leaving.  Although Kowen’s lyrics are often abstract, they are nevertheless hard-hitting in their simplicity and honesty. Here, the singer speaks directly with the listener. “I am not scared/of the sight of you leaving/I can’t imagine/all that you imagine/but your carefreeness/your carefreeness it has become calculated/your gentleness /your gentleness why has it hardened” Using vivid imagery and poetic devices; his words capture Ko’s thoughts on death and departure in a bittersweet but nevertheless uplifting way. Capturing emotions of longing and spiritual heightening without a hint of negativity is no easy feat; yet Kowen has pulled it off with aplomb and grace, presenting the theme of departure beautifully.

This sense of intimate lyricism continues throughout the album; coming through strongly again in “Far and Gone遠走”. “I wish you had someone who knows you/who can be like me and understand you”. The exploration of juxtaposition also seems an ongoing theme in Kowen’s album, coming through strongly in this track too; and used to represent a life lived earnestly and simply. Indeed, the arrangement by George Chen encapsulates this beautifully; featuring only an acoustic guitar, and at some points the dulcet stylings of a trumpet (an interesting choice).

Ko’s knack for storytelling knows no bounds; as shown in another beautifully optimistic track on the album “This is Life生活就是這麼”. Here, the message is simple and clear as Kowen sings over a carefree yet powerful arrangement: remember why you do what you do, and what’s important to you. For if not, what is the purpose of life? His higher range is well utilised in this track too; with soaring crescendos that embrace your ears in a flurry of almost hysterical; yet cleverly vibrant activity.

Kowen also explores some other nuanced extremities in “The Fear and the Laziness懶散與害怕”; dipping his toes into the blues genre with some gruff riffs and fuzzed up bass. One of the more darkly humoured tracks on the album, this song is about the complexities of communication and passivity. Are you scared or lazy? Or perhaps, as Kowen says, these two are ultimately connected, and not extremes at all…

One of the more popular tracks on this album, Ko features fellow indie singer Hong Pei-Yu洪佩瑜’s dulcet, clean vocal stylings on his sixth track “舞伴 Dancing Partners”. Just like a waltz; their voices meld in perfect harmony; Hong’s cleanness against Ko’s gruffness; her sweetness against his melancholy. Yet there is nothing simple or superficial about this dance; which is in fact a dance of wits and give or take. Catchy and sweet; but with mischievous guitar licks running throughout; it’s a playful way of debating when a relationship should end. Even though the partners are able, are they really partners if they are not willing?

Another personal favourite is his last track on the album “To you (You) 給你/妳”, which is probably one of the darkest on the record. At his TICC concert last year; Ko expressed that he wrote this song imagining what it would be like if his mother had passed. Although a dark thought to imagine, this is a sombre yet beautiful moment that is not to be missed out on. The only song on the album that focuses on the piano rather than the guitar, there are no skilful tricks or mischievous jibs here-just a beautiful, still rawness that is enough to bring me to tears.

While the focus of Kowen’s first album was more on his musical differentiation from other mandarin artists, the themes and nuanced content of his lyrics have come out to play in this second album in full force. True to the album’s name, Ko is a bard like no other; observing his surroundings and drifting from place to place; telling and sharing stories that you may not have known; but feel intimately attached to. Although softer more toned-down arrangements seem to work a little more in favour of Kowen’s slightly muted vocals; this album was nevertheless a well-made one; considering the years of painstaking songwriting that went into it. A beautifully woven-together narrative where Kowen’s stories are immiscible from our own; this album is a timeless one that just gets better with each listen.