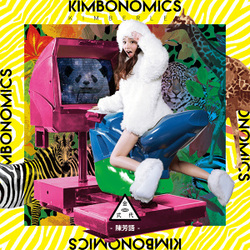 I feel that one theme that always comes through in each of Kimberley’s albums that is really reflective of her personality is the atmosphere of spontaneity that surrounds each song and keeps the entire album together. What her creative team including herself wanted to put out with this new album was the idea of a new era; Kimberley’s very own style that will take the Taiwanese music scene by storm. Although she has already done so in her first album, this time they’re back doing it even bigger, better and bolder than before. After tensions between Sony Music and Kimberley’s Producer Terence Leong forced him to call it quits, Kimberley continued to work with them and this time produced an album almost completely reliant on the help of a bunch of creative friends who were purely just doing it for the music rather than the money. You can hear their passion, their creativity and their love for music; and that’s what really shines through in this album and makes it so appealing. After listening to Kimberley’s second album, I can honestly say that I believe Kimberley’s totally taken the music scene by storm, and will sooner or later become the new queen of Mandopop. As young as she is, there’s no doubting the breath of fresh air she’s brought to the music scene since her arrival and <爱你 Love You> rocked the music scene. This is definitely another album that defines her status as one of the young pioneers in the music industry today, leaving me as impressed as always.The album starts off by easing in to Kimberley’s unique neo-mandopop style with <分手說愛你 Breaking Up To Show I Love You>, a song written by the talented SKOT SUYAMA 陶山 (Producer/Writer of <爱你 Love You>. With a play on dynamics one of his specialties, Kimberley pulls off the song flawlessly, opening with a voice as sweet and smooth as candy, then transitioning smoothly into a climax in the prechorus and peaking at the chorus with her amazing vocals. The song is a surefire hit, with its likeable melody, Kimberley’s soaring vocals and an impressive fusion of rock and ballad genres. Props again to Skot for the smooth integration of a catchy hook and dolphin pitch. Definitely one of my favourites on the album.

<世界毀滅 The World Destroyed>, <你在身邊 You Are By My Side> and <Over The Moon> are three tracks which are quite similar in terms of the atmosphere and themes of the pieces; sometimes I have trouble telling which is which, and have the feeling that if I mixed the verses and choruses up, for example put the chorus from <Over the Moon> with the verses of <世界毀滅 The World Destroyed>, it would still make a coherent song. Not necessarily something that’s good or bad, but I do feel that songs need to have a certain element of unique recognizability that is theirs and theirs alone. Nevertheless, Kimberley performs impressively vocal-wise on all three tracks, with a perfect mixture of resonance, huskiness and sweetness.

<世界毀滅 The World Destroyed> shows off the resonance of Kimberley’s vocals, while in <你在身邊 You Are By My Side> she’s in top form, with seeming effortless improvisation on top of the melody. On <Over The Moon> she combines candy-like sweetness with a little rebelliousness to create an atmosphere of impulse and sweet romance. I feel that it’s these kinds of songs which show off Kimberley’s versatile vocal technique which set her apart from other singers; combining a high vocal range with different timbres and vocal techniques to really add colour to a song.

The first single for her album, <Good Girl趕快愛 Good Girl Let’s Love> is really interesting in the way that her creative team used a very hip hop concept but reversed it making the melody and vocals the main line with the rap part as a feature. Producer Terence keeps the arrangement simple with only a synthesiser and some acapella harmonies, but it’s amazing how different and innovative a song can sound with just a change in the traditional structure of a song. I also think that Jay from JPM did a great job capturing the flow of the rap, and as the lyricist, did well to create a energetic and fun atmosphere throughout the song. Always versatile, Kimberley’s vocals are this time more aggressive and forward, suiting the idea that Kimberley was trying to express of her being a very forward person when it comes to love.

As for <寂寞咆哮 Lonely Roar>, the melody and lyrics are match-made in heaven, with the verses starting softer, like the calm before a storm or the split second before an explosion, and building to a climax at the chorus, with Kimberley’s vocals achieving just the right amount of power and emotion at each turn, before softening into a falsetto, mimicking the aftershock of an explosion. Once again, Kimberley’s team shows that great things can be done with simple materials, pairing an elegant violin and piano arrangement with heavy synthesiser downbeats, giving it that element of strength needed to keep up with Kimberley’s voice, but not detracting from the atmosphere of the song.

<有愛直說 If There’s Love Tell Me> is another one of my favourites on this album, and is also the other song on this album written by Skot. The combination of a heavy grunge synthesiser beat with electric guitar riffs is an unlikely but awesome combination with Kimberley’s powerful voice. The song does well to make prominent Kimberley’s voice with the help of carefully placed harmonies and clean synthesiser beats which keep the rhythm in place. Due to Kimberley’s unique voice, I feel that lots of songs have to be specially arranged for her as her voice sometimes overpowers the rhythm, and so I feel they really did a good job with this piece. The punk rock feel suits the sassy lyrics of the song perfectly, and it doesn’t hurt that the melody is infectiously catchy.

<Run> captures the atmosphere of running perfectly, starting off slow, getting into the rhythm of your pounding footsteps, then gaining speed and a rapidly increasing sense of adrenaline rushing through your veins. It captures a very specific and unique set of emotions within it; a sense of freedom mixed with excitement, determination, persistence and anticipation for what’s to come and is to me one of the most meaningful pieces on this album. As usual, Terry keeps it simple with an acoustic guitar and clapping synthesiser beats steady like the pounding of footsteps on the pavement, yet bringing with it excitement and the ups and downs of life. Just like running, Kimberley urges listeners to live life with determination no matter how hard the going gets, bringing in her voice strength and warmth. I especially love the false stop at the end of the song before the last line of the song is sung again; to me it feels like a last burst of energy like at the end of the marathon, fighting hard for what you love until the very last moment,

As usual, Kimberley tells it straight with her only english track on this album, <I Loved U Before It Was Cool>, bringing a very different feel to this song. She starts off with a feeling of nonchalance in her voice as if she couldn’t care less, and somehow the somewhat nonsensical lyrics start to make more sense. A very cool song in all senses of the word. You’ll just have to listen to understand what I mean! As for the last track on her album <我會再想你 I Will Still Think Of You>, Kimberley’s voice, sweet and childlike at times while powerful and smooth at other times works really well with this song.

The only qualm I really have with this album is that almost all the songs are about love, and I know that Kimberley and her team are more than capable of writing lyrics with a deeper concept that also reflects their passions as much as their music does. Lyrics are really important to me in creating the concept of an album, because it makes the idea that they’re trying to get through to audiences a lot clearer sometimes. As they are trying to create a new era for Kimberley’s brand of Neo-Mandopop, I just wish that they could include a stronger element of lyricism and depth too. I hope in this aspect they can aim a little higher for her next album, but as usual, I’m really happy with the fresh and unique sound that Kimberley brings with every album. Ready for the next one already!