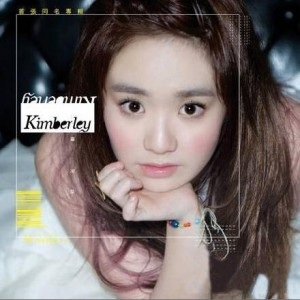 After finally being able to get ahold of the CD (see, supporting real copies!) and listening to it, this album is definitely one that is not to be missed for all those who feel that the Chinese music scene is waning in talent. 18-year old Kimberley Chen is an amazing singer with over 10 years of experience as a professional singer , having worked with Grammy-award-winning producers and even being involved in the musical of “The Lion King”, playing Nala. Her sweet yet versatile vocals range from cotton-candy soft to Christina Aguilera-style vocals in range and otherwise. The album itself involves the hard work of Producer TERRY TY LIN who was in charge of the production of the album and shaping Kimberley as a singer to make her big entrance into the music industry with her debut album.

In doing so, he has worked with several other producers icluding SKOT SUYAMA 陶山, notably writing the top hit <愛你 Love You> which skyrocketed to the top of the charts once her album debuted and also includes several collaborations with Kimberley herself, in which she writes lyrics and melodies.

In <愛你 Love You>, the track starts off slow with her light vocals, only to snowball into a much greater dynamic in the second chorus, followed by the bridge which awesomely shows off her strong and versatile vocals.

Track 2 <星際旅行> features aboriginal powerhouse, yet another singer known for her high vocal range, DAI AI LING 戴愛玲, this time showing off her rapping skills in this hip-hop track reflecting on a futuristic approach to life and music.

<Satellite> follows on with this idea of space and time, and the lyrics penned by Kimberley reflect on a much more simplistic approach to life through the eyes of 18-year old Kimberley.

<Wonderland>, <Friday> and <So Good> present a somewhat wilder side to Kimberley’s vocals, with very club inspired tracks . The lyrics for these, mostly penned by Terry Ty Lin once again emphasise on a very modern view of life, embracing it instead of moving away from it.

<沒有辦法沒有你> and <不可以沒有我> are tracks infused with Traditional Chinese Music and yet have moments reminiscent of American style RnB music. The lyrics are sweet and innocent, emphasised by Kimberley’s sweet voice.

The last track is another I would recommend, <Never Change> is another track written by Skot Suyama with lyrics by Kimberley. Stripped down with mainly a wood guitar as accompaniment, it lends a tinge of bittersweet and warmth to Kimberley’s breathy (I know its not a word) vocals which suit this song perfectly.