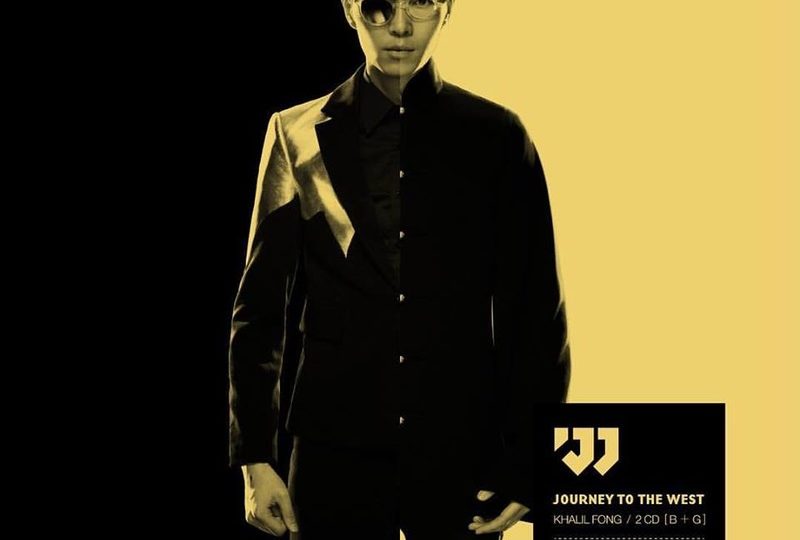 2016 was a year of major change for Khalil Fong. After leaving his old record label, he embarked on his own cultural entrepreneurial journey by launching his own independent label – Fu Music.

This makes Journey to the West (JTW 西遊記 ) a very special double album! Not only does it celebrate his 11th year in the music industry, it is also the inaugural album for his newfound independent record label. Many of us may be disappointed to hear this but it might be the last full album of music we get to hear from Khalil for a while. As mentioned on his Facebook page :

“For the time being this will be the last full album of original works. I am in the process of evolving and re-shaping. There is an abundance of creative diverse ideas in the pipeline from both myself, my team and affiliates and I look forward to seeing these realized to their full potential.”

It is uncertain what he means exactly by “evolving and reshaping” but we can probably expect to see him come out with other forms of creative work in the near future. Regardless, of what the future holds, Khalil fans should definitely listen to this album and cherish it for the time-being!

With the liberty to create on his own terms, I think Khalil’s taken full advantage of this newfound freedom, putting out the most unconventional C-pop album we’ve heard from him to date. In a lot of ways, it seems like we only got to hear a portion of Khalil’s true musical ideas in the past.

JTW is a huge leap forward in terms of Khalil’s continual efforts to redefine new parameters for Chinese music. He remains connected to his vision of fusing western and eastern musical influences together and continues to introduce new sounds that are uncommon to the Chinese listeners’ ear.

Overall, this album has a wide array of of fast, slow, and mid paced songs – enough diversity to please all listeners. It is a collaboration-heavy album, featuring artists from all walks of life, with some selections of collaboration partners being most unexpected.

On a higher level, the album is separated into two versions: Black (黑碟) and Gold (金碟)

Overall, I consider this album to be more international sounding, as there are songs in English, Korean, Mongolian and Chinese. It also features artists such as Zion.T & Crush and Hanggai (杭蓋) who are well recognized in Korean Pop and Mongolian Folk Music respectively. The songs are also more unconventional, as many don’t sound like your typical mainstream C-pop. I feel like they really test musical boundaries and challenge the ballad-heavy mandarin music market.

This song initially caught my attention with its super catchy intro, strong electronic beats and soothing R&B feel – something we don’t hear often in Taiwanese pop music. After further research, I realized this was actually the foundational song of the album that ties back to the “Journey to the West” theme! Written from the perspective of Sun Wu kong (Monkey King), a major character in the classic Chinese novel “Journey to the West”, he was a rebellious character who was detained by the Jade Emperor and Buddha under the “Five Element Mountains” for 500 years. Eventually, he was set free and transformed into a loyal disciple and protector of Master Xuanzang on their journey to retrieve the Buddhist Sutras.

​In a way, I feel like this song depicts Khalil’s own journey through the music industry and reflects his current phase of personal transformation.The music video showcases this new change as he loses his signature black rimmed glasses and embraces a new hybrid man-bun suited for the martial arts theme in the video. There is also a nice sentimental throwback included in this album, a bonus demo version of Wu Kong written by Khalil over 14 years ago!

This is another interesting song worth mentioning (It is also one of my personal favorites). Not only is it a song that makes you want to get up and randomly dance. It is also a collaboration with the one and only Wang Lee Hom!

Many consider Leehom as one of the original forefathers with the vision of fusing western influences into Chinese music. A collaboration with a predecessor who shares a similar vision is special – it symbolizes a big step forward in enhancing the bridge between East and West music. It may also inspire a new movement of collaborations for like minded artists in the future!

​Although, their styles aren’t exactly the same, this song seamlessly integrates both together into a catchy upbeat tune blended with hip-hop, rock and R&B elements. On top of that, it includes layers of traditional chinese instruments in the background including the Morin Khuur, Sihu, Erhu and Dombra!

For those of you who don’t follow Kpop, this collaboration is like having your favorite athletes from different teams join forces to play in one All-star game together. Chances are – if you like Khalil’s music you will also like Zion T and Crush. This is a perfect crossover of artists from both worlds as the song is right up in their soulful R&B alley.

This is a rare but interesting mix of mongolian folk music with some modern rock influence. It took me a few listens to get used to but over time it really grew on me. With lyrics in Chinese, Mongolian and English, it is definitely something I have never heard from Khalil before. My initial thoughts of this song reminded me of how I reacted to Wang Leehom’s “Beside the Plums Blossom 在梅邊 ‘ from his Heroes of Earth album. The first time I heard it, I didn’t know what to think as it sounded so foreign and unnatural but gradually it grew to my liking. I’m not sure how everyone feels about this song but I think one should definitely give Khalil credit for his creativity and willingness to try something different. Perhaps, this song foreshadows his intentions to integrate other unconventional genres of music into mainstream C-pop.

The Gold Album
Although, I don’t think Khalil’s music sounds like your typical C-pop (as there is always some western elements integrated in it), I feel like the Gold album is more C-pop friendly, in that more songs are in line with what we are used to hearing in mainstream mandarin music. Some listeners may prefer this album more, especially those who are big fans of his earlier works. The songs deviate less from those albums and will appeal more to those who prefer to stay in that phase a little longer.

This album features collaborations with notable names in Chinese music including Jane Zhang (張靚穎), Diana Wang (王詩安) and London-based artist Fifi Rong. The selection of artists are very interesting as they come from very diverse backgrounds with Zhang being a Chinese National, Wang being born and raised in Netherlands and Rong being based in the UK. Despite the different backgrounds, they all share the commonality of singing in Mandarin. This diversity further signifies Khalil’s vision to bring a multicultural experience to this album!

All Night (ft Diana Wang 王詩安):
This is a fun upbeat song that is well suited for Diana’s personality. It is probably the funnest song to listen to on the entire album. It has a very contagious feel good vibe that can bring up one’s spirit up to speed, real quick!

Que Sera – (feat. Jane Zhang 張靚穎)
This song is worth highlighting as it is a collaboration with arguably one of the most well known female artists in China! An easy listening R&B song accompanied by traditional Chinese string instruments, “Que Sera” is a simple sounding song that isn’t flashy but has the sophistication of a timeless duet that can be listened to for many years to come.

Overall, I thought this album very well done with very few things to criticize. But I kind of wish the albums were released separately, as I feel like it would have given listeners an undivided appreciation for all the new sounds introduced in each album, rendering this work is rather hard to digest all at once. It would also better highlight the originality and creative efforts put into all the songs. I also personally hoped for more heartfelt songs; ones where Khalil opens up and tells us more about his personal journey, adversities and experiences he had faced over the past 11 years. It would have been nice to hear him touch on this subject with a few more songs. I also feel that the multi-cultural theme could have been further enhanced through the context of the collaborations. It would have been interesting to hear artists like Diana Wang or Wang Leehom further incorporate their unique background and upbringings.

There are other songs that deserves honorable mentions on both albums. The Gold album features a medley of relatively more traditional songs, with Fong reverting back to his familiar R&B, Soul roots. Songs to look out for include the funky “Right Girl” and “HBDD (Not Very Low Key)“, the Soulful “Run From Your Love“, “Dark Night” and even the Gospel influenced “Once“. The Black album features a good mix of easy listening songs. If you are looking for something slower, you should check out “NMW”, “Butterfly Dream 夢蝴蝶” and “Love so much”. If you are in the mood for something more upbeat and catchy -“ Wu Kong (2003 Demo Version)”, “ Listen 聽” and “Opening Smile 笑開” are worth a listen.

I also think it is important to recognize the contributions, Hong Kong based producer Derrick Sepnio made to this album. I feel like his work has the unique sounds of western influences mixed elegantly into Chinese music. It gives Chinese music a different demeanour – perhaps one that can better bridge eastern and western sounds together. A few examples include “Right Girl”, “HBDD”, “Listen” and “All Night” . I definitely recommend everyone to check out more of Derrick’s work in the future!

Through JTW, I feel like Khalil took a major step forward with his vision of redefining musical boundaries and fusing western influences into Chinese music. This album adds a refreshing sense of excitement back into the music scene, by battling against the stigma of sacrificing creativity for commercialism and creating sounds that compile with industry standards. In my opinion, music is a constantly changing art with no strict rules. Sometimes the best way for artists to nourish creativity and continue to keep fans intrigued is to create something out of the ordinary and JTW definitely achieved that for me!