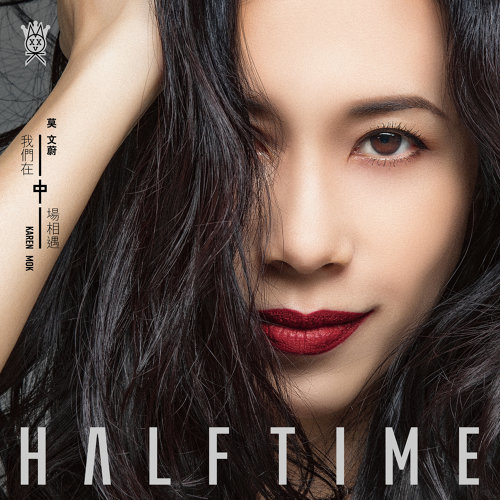 Since her Cantonese debut in 1993, Karen Mok 莫文蔚  has not only remained on the top tier of Chinese language musicians, but pushed the boundaries of what is expected of female performers. From her early covers and photo shoots where she is mid-way through eating a hot dog, wrapped in see-through cling film, shaving her head and appearing fully nude, Karen Mok has spent her career challenging standards of beauty and women’s status and capabilities in the entertainment industry, all whilst delivering songs which have become mandopop canon, such as He Doesn’t Love Me 他不愛我 (1997) If I Don’t Have You如果沒有你(2006), and Baby 寶貝 (2010), in turn making her an icon for an independent modern day woman, and putting her in a bracket of icon that few can only dream of reaching.

On her seventeenth album Halftime 我們在中場相遇Karen maintains the consistent high quality that she is renowned for. For this seminal release, Karen brought in an army of over twenty of the biggest names in Mandopop today, including Li Ronghao 李荣浩, Khalil Fong 方大同, JJ Lin林俊傑 and 2018 singer entrant Hua Chen-yu 華晨宇, with long-term collaborator Arai Soichiro 荒井十一 present as executive producer. She mentioned in an interview that she felt honoured that so many producers and writers wanted to work on the project, and that inviting so many artists and musicians that she has worked with over the years to collaborate with her on a record which has deep significance to her acts as an expression of her gratitude.

The album is split into two halves. The first half is compiled of songs that are meant to feel classic and are composed by her long time collaborators, whilst the second half is meant to evidence Karen’s versatility and innovative capabilities as a performer via production and lyrics being provided by new collaborators.

From the word go, we have classic Karen in action. Let There be Light如初之光 is a stunning ballad with an anthemic chorus, is a song blooming with positivity, and acts as a great introduction track for the album. Produced by Singaporean legend Lee Shih-shiong  李偲菘, the track feels instantly contemporary, yet rooted in traditional mandopop balladry. With lyrics provided by prolific Taiwanese lyricist Yiu Him姚謙, the song is contemplative, and is a fascinating combination of imagery and interaction on a  micro-level whilst interconnecting with images and notions of mountains and galaxies.
​
I Do is a surprising number, interchanging instruments and styles to make a unique yet accessible track. Whilst the song switches between being guitar and piano led, it is the introduction of the waltz at several intervals which is truly surprising, and feels effortlessly beautiful. Such a complex song is followed by polar opposite Fly 飛, a perfectly serviceable and simplistic folk-lite song which would actually make a great album closer, but is oddly placed as track four, and is somewhat of a wet towel after such a great start.

Taking it out of the context of the record however, the track has a multitude of fascinating layers. For the track, Mok worked with Jonathan Lee Chung-shan 李宗盛, who has been working with her since 1996 and was awarded best producer at the 12th Golden Melody Awards for his production on Karen’s 2001 album On the Twelfth Floor 十二樓的莫文蔚. For Fly, Lee delved into his rich back catalogue and re-arranged a song he wrote in the 1980s for Taiwanese singer Michelle Pan Yueh-yun 潘越雲.
​
One thing Karen is known for is her ability to not only hop across genres, but do so meaningfully and convincingly. Whilst plenty of artists incorporate a variety of styles onto their records to give it as much of a reach as possible, Karen does it in a way that doesn’t feel forced, but rather as a genuine statement of artistic expression. Whilst she is successful for the most part, No Intermission 中場沒有休息, despite being written by the legendary China Blue, comes across flat. Whilst it captures that feeling of urgency and is a welcome break after a slew of ballads, Karen sounds rushed and the production tinny, making for an underwhelming track which theoretically is the base of the album.

Growing Fond of You 慢慢喜歡你 is arguably the best ballad on the record. Written by Li Ronghao 李荣浩, The concept of the song is rather than being overwhelmed by a fast romance, falling slowly in love with someone is more romantic, and allows for greater time to appreciate the intricate details of each other, in turn allowing for a deeper love. By taking our time, we can savour the time with our loved ones, walking together into old age.​ It’s popularity is a testament to its quality – the song has become somewhat of a viral sensation, inspiring countless cover versions online, some even taking the song down a humours route, and one cover even uses the erhu. The versatility of the covers evidences the songs strong backbone, and a truly well written song with song production credits can become any genre.

Khalil Fong 方大同 works his magic on standout track Ultimate 絕. Fresh, confident and joyous, Ultimate is four minutes of unadulterated 70s inspired disco/funk and a perfect addition for any summertime playlist. The spoken middle-eight is a little like watching your mum try to rap, but it won’t fail to bring a smile to your face. The song is a self-empowerment anthem: whether your past was filled with bad times or good times, we have to feel everything, because our experiences as a whole make us into who we are.

Following track Dancing in the Rain is also an obvious highlight. The track is not only a mild stylistic departure for Mok, but also for Taiwanese aboriginal band and producer of the track Matzka, who stray from their usual reggae sound to deliver something special. An exquisitely layered mid-tempo, the song is a lesson which teaches that rather than avoiding adversity, we should instead fully embrace it so we can move onto brighter days.

Not to be Continued 不待續 oozes sex and sexual liberation. The guzheng is used in a similar style to a guitar, and is combined with an R&B-esque beat whilst Karen provides deliciously sultry vocals over sexual lyrics (This snack should be eaten now, don’t take-away and wait until later). The chorus, despite breaking with the melodic verses, is a stunning show of Karen’s falsetto, and is fantastic at bringing the audience into the atmosphere of the song.
​
Halftime as a concept is interesting due to the number of ways it can be perceived, outside the obvious musical differences between the first and second halves of the album. Firstly, a halftime show in a sporting event is meant to offer respite – to the players and to the audience. Taking this context, the halftime show isn’t meant to challenge or excite, but rather be a distraction. The other concept is something that we have seen in recent years, where it seems that the halftime show eclipses the show itself. Super Bowl performances by acts such as Beyonce, Katy Perry & Madonna, for instance, have redefined the role of the halftime show in entertainment, making them a must-not-miss unveiling of an artist at their absolute peak, unleashing a flurry of hits, dance routines and awe-inspiring staging that become the subject of water cooler discussion at their meekest, and make an undeniable dent on popular culture at their most impressive.

​With Karen’s halftime show, it unfortunately leans more towards the former interpretation than the latter. Whilst every song on the album is at least good, it’s difficult to say that more than a small handful are truly great. When the songs are deconstructed, and we look at the quality of musicianship, Karen’s vocal performance and the lyricism, it’s difficult to find any complaints. The problem is however, that it lacks the freshness and innovation which Karen is renowned for. Her unique radiance and ability to truly sell the song to the audience masks this to an extent. It seems though that where the strength of the album is its understated charm and elegance, this is also its biggest shortfall. Whilst preceding album Departure may not have been as heartfelt lyrically or as carefully constructed, with songs such as Regardez 看看, it was an album that demanded the listeners attention.

For an artist 25 years into a career, Halftime is somewhat of a triumph – a victory lap around the stadium and a celebration of Karen’s achievements with those that helped her get there. It’s easily accessible enough for new fans and Karen enough for veteran supporters. We hope that in the future however, the second half of Karen’s career is a closer resemblance to the first half, rather than a continuation of the halftime show. It’s impossible to not be endeared by Karen however, and even when she’s not performing at her best, she’s still in a league of her own.