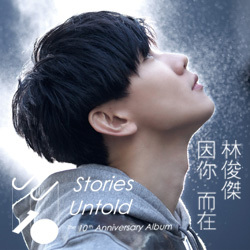 This has been an memorable year for JJ Lin’s as it is his tenth year in the music industry! If you want my honest opinion of JJ Lin, I’ll have to say that I understand why he hasn’t gotten a Golden Melody Award thus far in his career. I respect him as he is definitely a talented singer and songwriter especially, having written various hits such as A MEI 張惠妹 <記得 Remember>, CYNDI WANG 王心凌 <當你 When You> and CLAIRE GUO 郭靜 <心墙 Heart Wall> just to name a few. Not to mention, his voice is kind of to die for. BUT – and its a really huge ”but’ there; he doesn’t know how to put together an album.  Enraged fans may be readying their hands to strangle me right about now I’m sure. But to me, an album is about a concept, a story, an idea. And I’m sorry to say , but JJ Lin doesn’t have one. Each and every one of his albums has a name; like this one “因你而在 Stories Untold” but what does it actually mean? How does it link each and every song of the album together? Although this album is an impressive accomplishment; collaborating with the biggest names in the music industry namely WANG LEE HOM 王力宏, MAYDAY 五月天 and HARRY CHANG 張懷秋; it simply has no continuation from one song to another. There is no theme within the songs and although each and every one of them has their own wonderful qualities; sometimes 12 songs do not make an album.The first track, <因你而在 You N Me> is a catchy song, easily likable due to its catchy rhythm and beat; and I applaud JJ’s use of improvisation and his playful spirit that really goes with the song. But as catchy as it may be; the lyrics for me, written by famous songwriter and lyrics Tina Wang are sub par at best. The phrases that she uses are clumsily jointed together and rhymed like a primary school poem but are energetically buoyed by the potent likability of the melody.

The second track <零度的亲吻 Frozen Kiss> has a nice melody but a dated arrangement; very much like many of his other ballads. it works, but doesn’t excite me too much. However, I was quite impressed by his third single, < 黑暗紳士 Dark Knight>.  His collaboration with MAYDAY 五月天 as the arrangement of it was too hot to handle; a fusion of his electronic style with Mayday’s spontaneous rock that worked together perfectly.  With apocalyptic imagery brought on by the lyrics of 阿信 A SHIN, it becomes a sure hit and has got to be one of the most meaningful songs that JJ has ever done in his career. It really sets him in a different light in this song, as he rarely participates in Rock genres; but does show off his versatility.

If there was a theme to be used within this album; it would be time and this can be seen in his duet with his brother <飛機Plane> as well as <以後要做的事 Future Tense> and <一千年後記得我 After A Thousand Years, Remember Me>. However the latter reminds me very unsubtly of one of his previous popular hits, <江南 River South> and is too obvious to go unnoticed . The attempt at a theme kind of ends there, which is disappointing.

But sad ballad < 修煉愛情 Practice Love> does have a sad story behind it relating to Jj Lin’s friend who was in love with him but died in the 1997 Silkair crash. The song itself has such a simple classic arrangement, but everytime I hear it, it ceases to amaze me, the emotion that it evokes in me with every rendition and chorus. This is the only track that adheres to the theme described by the title “因你而在 Stories Untold” but yet this story is not told in the lyrics nor the melody, but in the context of the piece which sadly is not considered a contribution to the album.

His mashup of Classical music and hip hop/rap in his collaboration with Wang Leehom is also one to be applauded; as he arranges and produces a seamless combination that takes the elegance of classical music and the rhythm of hip hop to create a refreshing atmosphere. However the lyrics for this track named <One Shot> completely throw me off any hint of concept that I would have prior to listening to this song. Lin’s prowess in writing lyrics for English songs thus far seems to only relate to somewhat post apocalyptic military/struggle type songs and its getting a little tired for me.

A low point in his album would have to be good friend Da Mouth’s Harry Chang who features in his piece <友人說 A Friend Said> as I feel his part was kind of unneccessary and detracted from JJ’s classic hip-hop style within the piece with his silly banal voice that cannot be classified as singing, but only as saying words and repeating after JJ. A little more complexity in his part would have been nice. On the whole, I enjoyed the melody of most of the songs, the lyrics of some of the songs and in general found it a good album; one of JJ’s better ones. I still maintain that it has no real concept though and hope that JJ continues to improve on this point in the future to create better works!