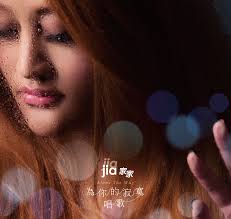 Album Name: Along the Way 為你的寂寞唱歌

This time around, I was expecting the sky from JIA JIA 家家, a singer who rose to critical acclaim with two nominations for her debut album <忘不記 Unforgettable> during the Golden Melody Awards last year. This year, she proved her worth once again by producing an album even better than the last, putting together a bunch of songs which were relatable, meaningful and flawless in terms of performance quality. What else can I say, the girl knows when to hold back, and when to let it all out. Jia Jia’s singing technique has always been nothing short of amazing to me; the fact that she was back-up singer to Della Ding previous to her being discovered by Ashin has instilled in her a sense of down-to-earth-ness in her voice. What matters about the song is not how loud you song or how high a note you can sing without putting on a falsetto, it’s about the song. And that, my friends, is why she’s been nominated two years in a row for Best Female Mandarin Singer at the Golden Melody Awards. But I digress. The album concept of Jia Jia’s album has two parts or themes which reoccur throughout the album. As the name of the album is <為你的寂寞唱歌 Singing For Your Loneliness>, the creative team have put together a seamlessly flowing integration of the two themes of ‘Songs for the lonely’ and ‘Being lonely’ clearly throughout this 13-track masterpiece. And of course, what do Taiwanese people know about being lonely? Clearly everything, seeing how much they love to sing sad ballads at Karaoke. So you might be able to imagine what a success this album would be in Taiwan. Both commercially and critically, this album has fulfilled all my expectations just as any great album should – a true gem that Jia Jia should be proud of!<為你的寂寞唱歌 Singing For Your Loneliness> does a great job as an introduction to the album; giving Jia Jia’s music a whole new dimension with a folksy, independent yet soothing feel. The really awesome thing about this song is that it’s just Jia Jia and the acoustic guitar being recorded in this song, no backup vocals, no fancy drumbeats or synthesisers. Just two voices which are able to interact organically with such chemistry to create such depth and emotion through distinctively unique rhythmic patterns. It just goes to showcase the true prowess of Jia Jia’s vocals; and the lyrics tie in with the concept flawlessly, short and simple, but yet encapsulating the theme of the album wonderfully by mentioning the way loneliness ‘sings’, and may be woven into a song, as well as how we sing for loneliness, and for unrequited love.

I find that although Chinese music loooves to talk about ‘Love’ in all its’ aspects, unrequited love is one that isn’t mentioned very often, probably because its very hard to imagine a plastic pop princess ever having to feel that way. But this is an element which is threaded throughout the album, in songs such as the one mentioned above, as well as in <不等於 Not Equal To>, an eclectic number which combines elements of warmth and coldness, the classic violin and piano combination fighting against electronic dubstep beats. Jia Jia uses her silken vocals to whisper in your ear, pulling you in for a bout of rejection as she sings ‘Just because I love him doesn’t mean he loves me’. But isn’t that what it’s all about? Loving someone who doesn’t necessarily love you back is intoxicating yet gut wrenching, passionate on one side but cold on the other. The arrangement of the song reflects it perfectly in its atmosphere of perplexing, bittersweet warmth.

The next track’s <不置可否 Noncommittal> name says it all; from start to end, the piece infuses a soul groove complete with acapella backings and brass inserts with combined with the sound of bongos and electric guitar to create a contemporary, and refreshingly relaxed, noncommittal atmosphere, borrowing feelings of relaxation from the Bohemian/Jamaican feel, and adding a snazzy jazzy rhythm to keep you nodding in time to the beat the whole time. Jia Jia shows us that this is a song that can be sang when you’re lonely too! Her subtly applied sass and spunk in this song works wonders. Maybe loneliness also comes from ambiguity in relationships, as the lyrics of the song suggests!

Jia Jia continues on with this theme of ambiguity in her next song <也許,也許你愛我 Maybe, Maybe You Love Me>, a song that mixes up a heavy concoction of fear, mystery, anxiety and at the core of it all, the persistence of a dark kind of hope that maybe, just maybe he or she loves you too. Jia Jia’s versatility shows infinite possibilities as she turns her seductive and mysterious side out for listeners, using dynamics in a way that shows us it less is sometimes better than more, as she uses the belting technique frugally, at times switching things up by breaking into a falsetto that releases suspense in a wave of emotion for listeners. In <巧克力 Chocolate> she turns playful yet seductive in a jazzy tune that keeps the beat going with steady percussion, fusing bebop with hard rock for a unique sound that encompasses fun and mystery, the sweetness of her voice melting into the bitterness of the arrangement like chocolate.
That was a hard act to follow, but Jia Jia handles it with a cool relaxing of the atmosphere in her chart-topping hit <我沒資格 I Don’t Have The Right>. (Note: I literally heard this song five times in one day while I was in Taiwan. Not even exaggerating, she’s that good.) But I really have to give props to MAGIC POWER MP魔幻力量’s 廷廷 TING TING who wrote the lyrics and the melody for this song. It’s a little reminiscent of the moody sound that Jia Jia had in her previous album, but at the same time, something’s changed, an atmosphere of release and freedom underlies the entire song. Despite the song being heartbreaking, with the lyrics depicting a person letting go of her lover because she feels she has no right to continue making him unhappy, there’s a kind of cold, crisp relief that hangs in the air within the song, probably something to do with the soaring violin arrangements. It’s always impressive when someone’s able to take the traditional ballad formula and really make something different out of it, somehow managing to conjure up something other than the generic dull sadness you get out of most, and this song really impressed me in that respect.

<快樂快了 Happiness Is Near> is one of the most breathtaking songs that I’ve ever heard. I was enthralled from the first listen by the complete honesty that I felt in the atmosphere from the first note. In the grungy twang of the guitar I heard and saw someone tired, mentally and emotionally; but what I also saw was hope, love and acceptance. That right now, you may be in a bad place, but just knowing that something much better is coming fills us with a kind of comfort and warmth which is inexplicable and indescribable through words alone. But yet TANYA CHUA 蔡健雅, the composer of this song managed to grasp onto this specific piece of the human experience, and replicate it in the form of music. There are not many who can do so, and it’s like she saw the phrase “快乐快了” deep inside our hearts and minds and wrote up a melody for which it was match-made in heaven. Simplicity is always good when it comes to masterpieces, and just an electric guitar, drums and brass inserts were used mainly in the arrangement of this song, the latter representing and filling us with hope for the days to come.

But up next is a feel-good song written by YEN J 嚴爵 <睡衣PARTY Pajama Party>. The singer-songwriter’s music is nourishing and simple as always; banishing away loneliness just as well as a bag of chips and a movie. Jia Jia’s voice is sweet and girlish, her charm and spunk permeating the song and making it feel very truly, like a night in with friends or family. The sound is fresh, clean and bubbly, with simple drumbeats to keep the pace of the tongue-twisting lyrics, brass comments that make for a fun atmosphere, and cleverly-used vocal backings which keep the flow of the song going, and give it a unique soul feeling. I love the cheeky lyrics by Chen Mei, which remind us that loneliness doesn’t always have to be our first choice. Put away those dramas and sad KTV songs, have a PJ party instead! Also another one of the highlights of this album for me.

Up last as the official last track of the album (the album also includes Jia Jia’s <命運 Destiny>, a drama theme song as a bonus), <塵埃 Dust> brings in a hint of Chinese traditional twang mixed with a sense of haze and mystery, just like dust floating in the breeze. With elegant, modern lyrics and a beautiful melody, this song does well in using the piano, violin and bass combo to create new sounds and a refreshing feeling of space, isolation and insignificance, all while sounding exceptionally pretty and effortless thanks to Jia Jia’s vocals.

A beautiful and immensely listenable album on all counts; this one truly deserves all of my love. The concept of loneliness tends to seem tired because it’s so overdone, especially in the Taiwanese music industry, but Jia Jia really breathes new life into the concept, reviving it temporarily for our listening pleasure in the space 50-odd minutes; something artists have tried to achieved but failed at countless times. A wonderful album, well done to Jia Jia!