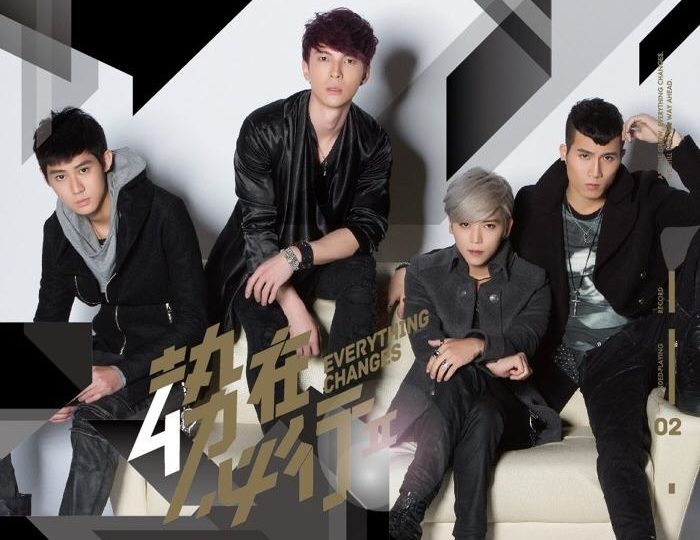 Firstly, I really think it was an ingenious idea of Eagle Music to team up two of their popular artists (Bii and Andrew) with two of their new artists (Dino and Ian) in order to help raise awareness and publicity for each of their upcoming albums by associating them intimately with Bii and Andrew for extended periods of time. That was a really innovative and creative way of getting the attention of fans, and it certainly paid off! As for the album itself, don’t be expecting too much because after all, it is just a platform from which Ian and Dino are introduced into the music scene, rather than a hard-hitting album with a real concept.The tunes are pleasant enough to listen to, with all four boys showing good effort in their first single, the English-language track <Everything Changes>, which was incidentally co-written by Peabo Bryan, famous for singing <A Whole New World> from Disney’s classic “Aladdin”. A little too old-fashioned with the lyrics for my taste, but as I said, I didn’t expect too much with this album so was pretty satisfied with this song.

The second track <Grow> was my favourite on the album. Written by Dino and sang in a duet with himself and Bii, the most outstanding element of this song is the arrangement, a refreshing burst of country rock and grunge, nothing less than what I would expect from famed producer Bing Wang who arranged it. Bii’s vocals are spot-on as usual, while Dino’s unique raspy vocals do bring a certain something to the song. And while the lyrics do have their moments, certain grammatical errors detract a little from the overall atmosphere of the song. Let’s just say if you weren’t familiar with Taiwanese music this song’s lyrics really wouldn’t make sense to you, but I could see what Dino was going for when penning the lyrics. Overall I can feel a unique honesty from this song, and definitely see Dino’s unique musical style coming through, although it may not be quite there yet.

The third track, <Find the Way> was written by Ian, with rap lyrics written by Bii. As for Ian I can also ssee his own musical style coming out, with is quite different from Dino’s; darker, more confrontational and upfront, but nevertheless matching Dino’s passion! Bii solos in the song, and does a pretty good job on it, hinting at some dynamics between light and darkness, but somehow falling short in truly ‘Finding the Way’. However, Bii’s rap is the highlight of the song. It could be that I don’t speak a single word of Korean, but his tone and flow are downright tight! Really hit the spot.

In the fourth track <Revolution> sang and written by Ian, once more I’m starting to feel a kind of dark passion that is a trademark of his musical style. However, although it may be his trademark, it ‘s also a hallmark of other singers such as JJ Lin and RChord, and was also a very prevalent style especially during 2007-2009. Sounds like it came straight out of a drama soundtrack for the X-Family or something, not too happy with this one.

The fifth track, <A song about love> by Dino once again falls short on the lyrics, but at the same time, I can see that he’s really trying, and some of his special blues, country and rock influences do permeate his music, although they may be misted over by confusion at times. Otherwise, I can really hear what he’s trying to say even though his lyrics aren’t perfect, and that’s the beauty of music. It fills in the words that we sometimes can’t say out loud. A very interesting fusion of western genres, such as blues, country and rock. Dino’s voice could do with a little smoothing around the edges, but I thought it was a good try on his part.

The album wasn’t particularly memorable, but then again, don’t think that it was meant to be. Sure did its job as a platform for Ian and Dino to start off on though, and they did really well in that aspect. Music-wise; a little disappointing.