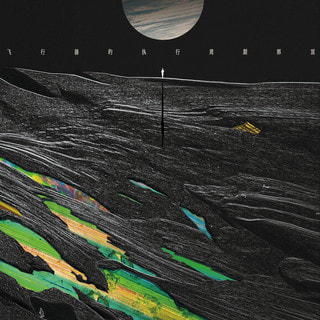 Guo Ding’s 2016 album, Silent Star Stone飛行器的執行週期 has drawn critical acclaim in the Mandopop markets, and nominated across the board at the Golden Melody Awards this past year. That is an impressive reputation, especially for an album that was inspired by data recorders on aircrafts. Though at first glance it is unclear how a hunk of beeping metal could inspire, the notion of ‘black boxes’ is an intriguing one. What if we had these ‘black boxes’ in our journeys through life? When played back, will it tell our stories the way we would have wanted? Would a black box tell our stories at all? That is the premise upon which Silent Star Stone rests.
​
Guo Ding ventures forth in the lead single of the album, The Fog Space淒美地. The fog space is described by Guo Ding as a unique dream place that he works hard to reach. The song is adventurous, driven by keyboard, electric guitar, drums and Guo Ding’s voice, all of which struggle against each other, in tension throughout this song. The fluency and versatility of Guo Ding’s voice is the highlight of ‘The Fog Space’ (and some might say the album).

​It possesses a timbre lean yet muscly enough to traverse the complex soundscapes that is ‘The Fog Space’. It climbs in the verses, upon sustained keyboard chords that ring out with intent, making its way through the rocky pre-chorus. It soars through the chorus at first, upon a melody line that guarantees release. Long sustained notes replicate a graceless free-fall that haphazardly brings its listener down – into the fog space, or back down to Earth? It’s hard to say. The genre of rock is foregrounded in this song as well as others, where Guo Ding draws on grungy guitar and riffs, notably in Put Your Face Down把你的外套留在深巷 and Rain Falls在雲端.

The sprawling universe of ‘The Fog Space’ is contrasted against the microcosm found in Mercury Records水星記. The title is an apparent reference to Mercury’s retrograde, an astrological phenomenon which creates turbulence and disruption uniformly across the horoscope signs. This phenomenon is replicated by the F chord played on a keyboard, which shifts minutely from variation to variation. The shifts are perceptible, yet so are the similarities – each chord is played exactly the same, going from low F to high F, and back again.

The verse is discomforting because it creates a notion of a familiar difference, the effects of mercury in retrograde upon our lives. One particular example of familiar difference is shown in the Mercury Records MV, wherein people who we once thought we knew, are no longer as they were. The chorus is sympathetic to this new uncertainty, as Guo Ding sings a melody line that ascends, yet pauses to catch its breath over and over, unsure of itself. It goes beyond the high F but only manages to reach the G, before retreating back down, testing the D below the low F, and finally returning to the F for rest.

The simple melodic themes of difference and uncertainty are confirmed by the lyrical questions posed by this song, and made resonant by the natural pathos of Guo Ding’s voice. “How far must I go til I can enter your heart?還要多元才能進入你的心／How long until I can reach you?還要多久才能和你接近”  We are always attempting to resolve such questions, and by bringing them to the fore in ‘Mercury Records’, Guo Ding characterises the subtle discomfort that is symptomatic of what it means to be human.

In spite of the musical cosmos ‘Silent Star Stone’ sets out to create, Guo Ding doesn’t forget to sweat the small stuff. Despite the notions of the space age the album reverberates with, its songs span the genres of rhythm and blues, folk, and rock. Although these influences is evident within many of the songs, it is in Back To Blue下次再進站 where it is the most apparent. As its title suggests, the final song of the album brings listeners back to Guo Ding’s bluesy roots. The beauty of this song lies in its playful homage to blues techniques.

The song begins with a slow ragtime-piano roll that snaps to attention as Guo Ding absent-mindedly drawls, “I just realised現在我才曉得 / that some things are too hard to come by有些是太難得”. He uses his versatile voice instrumentally in the truest sense by ‘playing’ it in the style of a blues guitar. He sprinkles staccatos in the verse, giving the song the stop and start rhythm so common to the blues, and bends notes all over the shop to achieve that bluesy twang.

​What emerges is an unpretentious song faithful to the blues, authentic to itself and the tradition despite being written continents away. Back To Blue下次再進站lacks the emotional and lyrical depth of Mercury Records水星記, or the unique soundscapes of The Fog Space淒美地, trading it all in for laissez faire lyrics and a typical chord progression. Yet it is unpretentious, fun and true to its roots, as are other songs on the album such as Original Human有什麼奇怪 and Twist the Wildfire 每個眼神都隻身荒野. Such songs ground Silent Star Stone in a rich musical heritage, satiating our musical palates with that ‘umami’ flavour that leave us wanting more.

In Silent Star Stone, Guo Ding brings forth an odyssey of sound, a story told through the lens of genre, lyricism and musical architecture. It is a black box, beeping with sound that reveals enough for a story, but knows that four walls cannot capture a life.

（Editors’ Note: Don’t forget to check out a touching and captivating 12-minute short ‘Never Let You Go’ made just to showcase the songs in this album. Directed by LA-based director Remi Huang and starring Julia Ma, Emmanuelle Roumaine Yang and Jason Her)