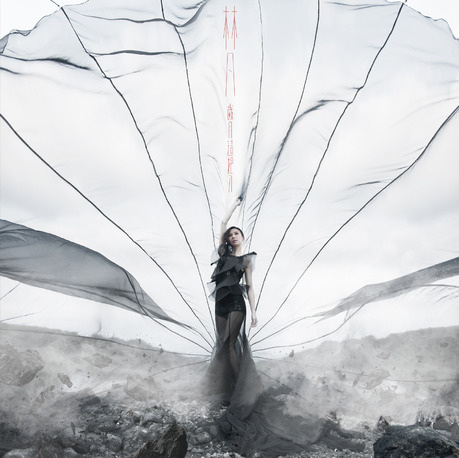 To me, Freya Lin’s always had a unique musical style of her own that is quite different from other singers, due partly to her uniquely sweet and feminine yet resonant vocals. But it is also due to her music always holding a sort of darkness and grunge that opposes her clear vocals, creating an interesting combination like yin and yang, complimenting each other deliciously well. This album contains a selection of works, some tinged with the sweetness of love, but the majority of the works are rock-influenced, to of course reflect on her concept of time being a concept which brings pain and sadness with its’ forthcoming.

Overall, I think Freya’s done a great job with the album, her vocals spot-on as usual. One of my favourites, also the theme song for the drama “Fabulous 30” is her first single <明明愛你 Obviously Love You>. Although it follows a very standard ballad form even with the classic two notes leading into the chorus, the combination of new with the old in terms of the classic piano with the grungy guitar, create a modern vintage feel which is what I really love about this song. Her piercing and enchanting vocals are like a knife to the heart (in the best way possible), retelling the story of love that cannot be expressed, and is hidden until the individuals themselves are unable to believe that it exists for the sake of keeping a relationship between friends.

The second track < 我們的故事只講了一半 Our Story Is Only Half Over> starts with a dark intro to a sweet and pleasant song which is occasionally injected with 80s rock-country influenced electric guitar riffs and a mixed mood of ambiguous romance and uncertainty. Telling the story of two lovers who cannot bring themselves to express their feelings for each other, the smile in Freya’s voice says it all; the story’s only half over. A song that always brings a smile to my face.

< 一戀愛就亂了 After Falling In Love, Everything’s Messed Up> is a song with lyrics which I admire very much. Written by the legendary Wawa 姐, they are simple but yet so clearly explain the complexities of being in love, and how it makes people lose logic or sense. This time, Freya sings about the concept of time stopping in the moment of an embrace, but once again the lyrics provide an overlying sense of foreboding which are hastily forgotten by listeners’ ears as they cling on to every note that Freya sings, a siren’s call which envelops the heart and mind. To me, this is a total embodiment of the concept of the song and of the album, forgetting caution in situations of seduction and danger; and when time starts up again, it will cause more pain than it does pleasure.

Another piece which compliments the album extremely well is <愛已經受傷 Love’s Already Hurt>, which suits Freya’s piercing vocals like cheese and wine; she maneuvers every note with skill and precision, like a surgeon who is an expert at cutting open people’s hearts…except she does it with her voice instead. She starts off soft, hiding beneath shrouds of mystery and unrevealed secrets, her voice peaks dynamically in the chorus as it’s too late to salvage love. Again, the punk rock theme fits well with this song, guitar solos prominent and well-placed.

These are just a few of the songs which I really enjoyed from Freya’s album, but every single song really does have something about it which is worth appreciating. Each is a hidden gem just waiting for you to find it! The concept is well furnished and discussed in a lot of depth through the lyrics, which is one of the main highlights of this album for me. The other highlight would be how amazing Freya’s voice sounds, and how perfectly they’ve tailored this concept to suit the unique properties of her singing style.

The arrangement and production for this album has also been well done, but I would say that it would have been even better for me if they had been a tad more innovative. Although the arrangements do help to put the whole album concept together, by the time I’m nearing the end of the album, all the songs are kind of starting to start sounding the same, what with the prominence of the husky electric guitar riffs and similar atmospheres in the songs.

Despite this, I am especially pleased with the way the concept for this album has been drawn out, especially due to the way that it links in with my trip to Taiwan, making me realise that sometimes, moments can’t last forever and that before you know it, some things can’t be taken back or gone back to which makes this album all the more painful for me to listen to, but at the same time comforting in the memories that this album will now hold on to for me.