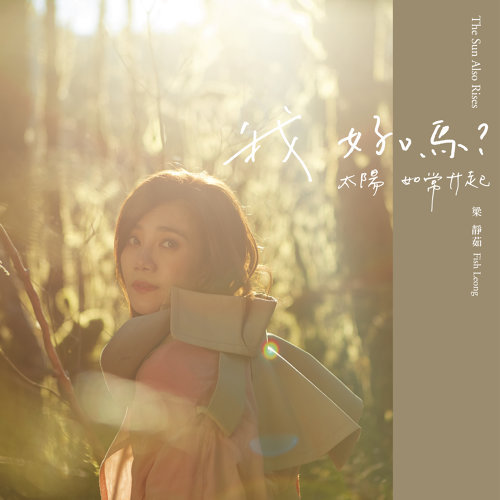 It’s hard to believe that it’s been seven years since Fish Leong 梁靜茹, the Queen of Ballads last released an album (2012’s Love in Heart 愛久見人心). Although she has remained busy, releasing the occasional single and holding concerts around the world, it’s clear that music hasn’t been at the top of her agenda for some time. Instead, of late she’s chosen to focus on her personal life, for example raising her first child who was born in 2014.

A two-year process in the making, Fish’s thirteenth album Am I Okay? The Sun Also Rises is a chance to reflect on the 20 year anniversary of her debut, 1999s Grown Up Overnight. The high quality production sees her collaborate with a team of experienced songwriters and producers with over two decades of experience, including executive Producer and long-term collaborator Tiger Chung 鍾成虎. Together, they’ve worked to curate a selection of songs exclusively for Fish, with songs that directly reflect her life.
​
The albums opening moment is also the most experimental. Glimmer 微光, which uses fireflies as a metaphor for the fragility and fleeting nature of love treads new ground musically for Fish. With an incredibly detailed and ever-evolving soundscape which adds to the movement of the lyrics; the song treads seamlessly from helplessness to stubbornness, and eventually to hysteria. By the end of the song, it truly feels as if the listener has been on a journey.

How Am I? 我好嗎  is interesting as Fish points the mirror at herself, in turn making the listener take an introspective look at themselves – the song does not relate to a relationship with another person, but rather the one that we have with ourselves. Before, during and after any emotional storm, we must be comfortable enough to understand and appreciate ourselves. A delicate piano slowly extends and interlocks with strings to set the mood, leading to the climax of sadness, and then slowly falling; swaying and touching.
​
Through using singing as a kind of therapy to relive and understand the events in her own life, the listener to is able to relive their own experiences and express themselves emotionally through Fish, who naturally tells the stories that we have all lived through. And the nuances in her serene voice makes her the perfect narrator for life’s most emotional moments. Over the past seven years her voice has matured, providing her storytelling with both with a sense of authenticity and believability.

Fish’s voice has always been a fascinating instrument. Honed in her youth through KTV and singing competitively, what may seem sweet and simple on initial listen is actually a complex and emotive tool. Where she may not have the range that some of her peers have, Fish is able to convey the sentiments of familiarity, understanding and warmth in ways only she can. This makes her not only an underrated vocalist, but also one that few can really challenge.

Sub-Lover類情人 is this records best example of this; Fish’s voice soars accompanied by only piano, making the listener pay full attention to the lyrics lamenting a one-way relationship. Similarly simple (composed of just four sentences) but equally powerful, The Sun will Rise Again太陽如常升起 encapsulates the theme of the album poetically with the same four sentences  (Don’t crawl, because you can fly / Yes, you really can).
​
The album does have some less than stellar moments. When Your Name Calls Me以你的名字呼喊我 suffers from particularly overwrought lyrics and leaves Fish seeming overwhelmed by the production. Paralleled Time & Space平行時空 is a generally unsatisfying experience, lyrically feeling overly try-hard, and musically half baked. Elements of rock and guitar are brought for no apparent reason, and the overall sound tinny and underdeveloped.

Whilst the album loses focus in the middle, momentum is built back up for the albums final moments. Non-Fish子非魚 is a light-hearted moment in which Fish reminds us to focus on the happiness and well-being of ourselves, meanwhile the atmospheric The Complete Me完整的我 signals the end of this existential journey, with an emotional and uplifting musical arrangement as Fish self-references her 20 year career, singing how looking for personal and professional fulfilment allows someone to become their complete self.

On The Sun Also Rises Fish successfully reminds listeners why she is an indispensable figure of contemporary Mandopop. Staying true to her musical roots and strengths for the most part, she has been able to mature her sound and remain musically relevant in 2019s soundscape. Although she could have pushed her forays into experimentation more, and this record likely won’t attract many new fans, for those who have patiently waited for the return of Fish Leong; it was a wait worthwhile.
​
4/5