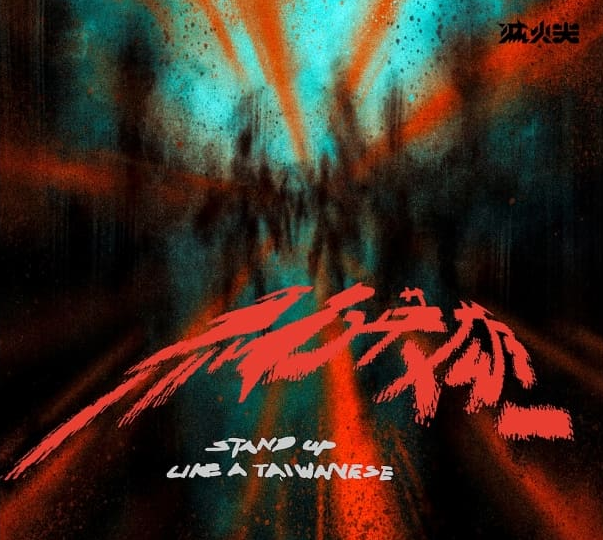 Whilst music and politics have long been intertwined in Taiwan, few bands have truly encapsulated a political moment in time quite like Taiwanese grass-roots rock band Fire E.X. 滅火器, whose song Island Sunrise 島嶼天光 (written in support of the 2014 Sunflower Movement 太陽花學運) not only became the anthem for a defiant and progressive generation, but propelled the band to leading activism icon status in Taiwan.

In preparation to celebrate 20 years since the band’s founding, the quartet teamed up with American producer and composer Mike Green (Sum 41, Gwen Stefani) to create their fifth studio album, boldly titled Stand Up like a Taiwanese 無名英雄. A call to arms to fight for Taiwan’s freedom and democracy, the band decided to use the ten tracks on the record to explore different eras of Taiwan’s fragmented history, exploring themes of authoritarianism, misery and adversity to inspire this generation of young people – just as their predecessors did before them – to fight for a better Taiwan.

Kicking off the record is the fitting title track. Evoking traditional temple culture with sounds of gongs and symbols, bursts of shouts against oppression get increasingly louder before a crashing guitar leads us into a thundering rock song; inspiring the listener to themselves becomes an unknown hero and persist in fighting for dignity against exploitation. Whilst Stand Up Like A Taiwanese could be taken as a simple rallying cry, the phrase traces its origins to the 1970s, when pro-democracy activist Peter Huang 黃文雄 cried it out after he failed to assassinate then-President Chiang Ching-kuo 蔣經國 in New York.
​
‘City of Sadness 雙城記’, written by Hong Kong’s Albert Leung 林夕 (Faye Wong 王菲, Andy Lau劉德華), is a song dedicated to the Hong Kong protesters in their search for universal suffrage. Whilst the English title is named after the Taiwanese cinematic classic by Hou Hsiao-hsien 侯孝賢 (悲情城市) which documents Taiwan’s 228 Incident 二二八事件 (an 1947 uprising violently repressed by the then government), the Mandarin title translates as A Tale of Two Cities, linking the current situation in Hong Kong with the historical tragedy focused on Taipei. An epic yet sombre mid-tempo, the song is a triumph, encapsulating that the fight for freedom – no matter how small – will never be defeated.

Another album highlight is 1945 一九四五. A significant year in Taiwanese history due to the Raid on Taihoku (臺北大空襲), the song is a sprawling and emotional rock ballad holding the sentiment that although the future may be dark and uncertain, it is love for our families and others which keep us pushing forward. This isn’t the only love song on the record. A One and A Two 十二月的你 is a soft rock song about lost love, yet a scratch beneath the surface reveals a homage to the Taiwanese economic boom and how many chose to pursue profit over happiness.

The anger and dissatisfaction of young people is also a topic that frequents across the record, albeit from different perspectives. Whilst Revolutionize the Disgusting Life 生活革命 is a charging rock track urging young people to channel their frustration into revolution, Juvenile 少年家 is motivational punk-pop track inspiring listeners to see their value, and to respect the creativity and characteristics of the next generation of youth, just as they wish they were treated by their elders.

In an album filled with heavy concepts and challenging topics, California Dream新歌五號 is a welcome if not out-of-place addition to the record. Due in part to the album being part-recorded in LA, the song is a love letter to the Californian punk-rock culture that influenced the band’s sound and style. Remarkable for the sheer joy it exudes, it’s really fantastic to hear Fire E.X. let their hair down and see that despite the burdens they willingly carry on their shoulders, they’re still the same teenagers who wanted to make music in Kaohsiung garages almost 20 years ago.
​
The album’s most subdued moment is found in the very last moments of the record. After nine tracks of soaring choruses and energy-driven guitar riffs, it is the semi-acoustic Liberal Sailboat 航向遠方的船 which sees Fire E.X deliver their closing message that “you know that freedom is the end / no matter how far away it is”, fleshing out the metaphor of Taiwan as the boat, and its inhabitants the passengers.

Just as Fire E.X. are much more than your typical rock band, Stand Up like a Taiwanese is much more than your standard concept record. An energetic and pulsating tri-lingual punk record with pop sensibilities, whether it is rage-led guitar solos, sing-a-long anthemic choruses, or sombre moments of quiet, each song is a pop-punk gut punch with air-tight melodies.

To limit our appreciation to the music however would be a disservice. Stand Up like a Taiwanese encapsulates the political spirit of a generation, at a time when what it means to be Taiwan and Taiwanese matters more than ever before. As Blacklist Studio’s 黑名單工作室1989 Songs of Madness 抓狂歌 captured Taiwan’s chaotic transition to democracy, Stand Up like a Taiwanese is a snapshot of a youth-led revolution in the fight for their home, acutely aware of their past, and using it to define their future. That it is released one month before Taiwan’s 2020 Presidential election only makes topics discussed on the record even more strikingly relevant.

Stand Up like a Taiwanese sees Fire E.X. solidify its reputation as one of the most important Taiwanese bands of this generation. Loud and defiant yet perpetually optimistic: what better way to kick off a new decade?