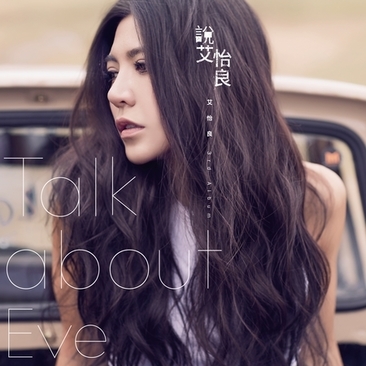 Eve Ai‘s latest album “Talk about Eve” is exactly what its title proposes it to be. Like an intimate conversation between friends, Ai broaches a number of topics that span the themes of Love, Life and Escapism, like short anecdotes which are wispily threaded together and bound by Eve’s intimate and unique vocals. Eve professed that prior to the creation of this album, she harboured a rather negative and pessimistic outlook on life before realising that love is the answer to all ill intentions and hatred. Shedding the thorny outer layer which she had previously worn in her social critique that composed her previous albums, this time Eve’s latest album is a reflection of a freer, happier yet still strongly independent version of herself.

On the first track “Say“, Eve collaborated with singer-songwriter Eric Chou who wrote the melody for her. Although the song was originally intended as a ballad, producer George Chen instead arranged it with strong EDM influences, injecting it with a mysterious aura of headiness and lust. The piece was an interesting concoction as the meatiness of Chou’s balladic melody interacted with the EDM sound and paired off well with Eve’s sensual, throaty vocals. The lyrics, which separately hint at a dedicated love between two people, instead to me react with the throbbing arrangement to give off a ‘caught in the moment’, transient meaning.

Another highlight of the album was one of my favourite tracks, “The Sum of Us“. Eve professed that within this song, she tried to tell the story of a girl trying to look at things from the perspective of a boy she liked, logically trying to work out how he was feeling, cutting herself out from the picture. However, Ai’s moral of the story was that love is not a puzzle or mathematical equation to be worked out (The ‘sum’ of us, get it?) which she eloquently put through in her lyrics. The absolutely beautiful acoustic guitar part was all that accompanied Eve’s voice within this song, but yet filled the atmosphere with such depth, leaving the air heavy with regret and thoughts of logical explanations for lost love. The guitar and Eve’s voice supported each other perfectly, picking up slack where the other left off, making for a reflective and organic piece.

The third track “Bad Check” is another high point of this album for its complete and engaging thematic experience. Borrowing inspiration from Quentin Tarantino’s film “From Dusk Til Dawn”, the song simply constructs a wild wild west atmosphere from nothing more than a guitar, tambourine and a little bit of whistling. This song was written during a period where Eve was facing a complex mix of emotions, and felt that nothing was going right for her. The somewhat pessimistic lyrics reflect this: “The world is changing Yet people turn bad”. Eve’s loose and emotive vocals and the passivity of the guitar’s lazy country-style twangs further build up this feeling of lost hope. However, whether ironically or not, Eve sings in the bridge of love being everywhere in our hearts, in the deep, in the palm  of our hands as even just a small sliver of hope.

This was closely followed by another stunner, “Escape Plan” which made up the main song which espoused the sub-theme of the album, that of escapism. Starting with the increasingly loud buzz of white noise which is rapidly joined by the taut, urgent pluckings of the guitar, Eve’s voice comes on just like a security announcement over the loudspeaker, almost as if some kind of impending danger is coming. Eve’s high-voltage vocals which veer almost precariously on hysterics in the choruses “Find an escape plan/I’ll take you away” further drill in this sense of urgency and rush of adrenaline one feels while listening to the song. Skilfully placed is also a short period of downtime in the bridge where the lyrics and the chorus match perfectly, creating a sense of security and recharge before launching re-energised back into the chorus again.

The eighth track “Then You Come Along” is one that I know means a lot to Eve, so I wanted to break it down a little for you guys too. Although just simply done with piano and strings, producer Chen is skilled in using these traditional balladic elements in ways that are unexpected, and this song is no exception. The lyrics of the song detail Eve’s experiences of being lonely and caught in the dark before being pulled out by love. This is reflected in the large jumps of octaves in the piano which create a sense of uplift for the mostly sombre melody. However, this song is more complex in emotion than just a happy ever after love song, with the lyrics hinting at some conflict in finding love and ones’ self identity.  “It’s hard to forgive/It’s just hard to stand/Falling for someone like that” signifies the internal struggle of perhaps compromising ones’ values for love. Eve’s vocals are soft and reflective in this song; rich with emotion that renders the imperfections of the song its strengths instead.

The last song I’d like to mention specifically is Ai’s collaboration with longtime friend and singer-songwriter-producer Evan Yo called “Lean On”. While Eve has explored the theme of escape in all its different aspects; from ‘Why’ one needs to escape (Bad Check), to ‘How’ one will escape (Escape plan), I instead like to skip straight to ‘What’ happens after the escape which is essentially what this song is. Starting off with a beachy, seaside sound just on an acoustic guitar and Eve singing lightly, the first round of the song establishes an easygoing feel which is built on by layering in underlying groovy bass and electronic beats to give it that much-needed pop of energy that every adventure has. Once all the parts are added in, they constitute what I like to call ‘electric happiness’. With a really spontaneous feel in the melody, the sunny song is kept in throughout the whole song with the electronic elements driving it forward and giving it that much needed edge.

Overall, loving the album! But there are two points which I’d like to specifically commend Eve and her creative team on. Firstly; the way they were able to use such simplicity to put together an album with so much depth is truly a feat in itself. Especially with a textured voice like Eve’s getting the arrangement and everything whittled down to just the core elements is important. And producer George managed to do it while still skilfully creating all kinds of different emotions and sounds too! Secondly, I love how each of the songs are glistening anecdotes that each stand alone to tell a story too. In fact, I feel like the entire album is more like a collection of stories rather than one story together. Eve has a magical storytelling ability which allows one to understand what she’s saying simply, while also creating much depth if one bothers to look closely enough. One critique I have for the album however, is that there isn’t one overarching message that all of the songs adhere to. I found it hard to connect the dots between the songs, or see how they led into one another to tell a bigger story. Nevertheless, this album is chock full of Eve’s one of a kind gypsy-like energy which is unmistakable and irreplaceable. Well done!