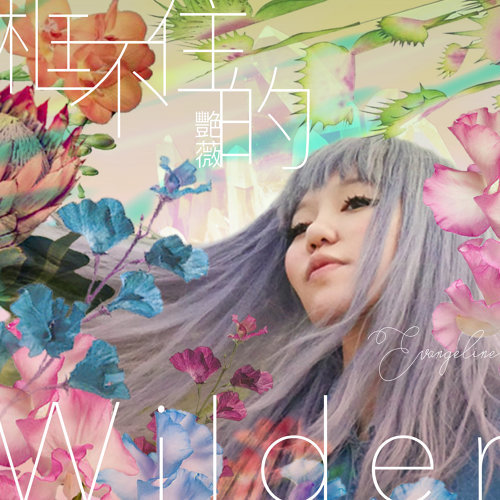 Despite only just releasing her debut album, Malaysian-born Evangeline王艷薇 has already built herself a formidable reputation on the mandopop scene both at home and across Asia. After being discovered by none other than masterful producer Skot Suyama陶山 after uploading self-recorded performances to Youtube, he brought her to Taiwan to study under his wing, where she has not only flexed her song-writing talents (writing for Claire Kuo 郭靜 and the title song for the Transformers 4 OST), or proven her ability to hold her own ground with artists such as R-chord 謝和弦 and Kimberly Chen 陳芳語 by featuring on their records (搖滾沒有死掉 and 分手說愛你 respectively), but has also stood on her own two feet, singing the title track (Touch the Sky 碰到藍天) for hit Hong Kong film ‘Special Female Force’ 辣警霸王花.

The time has finally come to introduce the talent that many of the most respected players in behind-the-scenes Mandopop see as a formidable talent to the general public at large. Expectations for Evangeline’s debut album are high – can the 24 year old deliver?

The title of the album, Wilder 框不住的愛, in many ways feels like a mission statement. In Evangeline’s words herself, the things which people long for – freedom, liberation and happiness – are often crushed under the pressure of the reality. However, Evangeline chooses to continue to explore herself, the world around her, and the emotional experiences that these all bring, choosing to be the owner of a curious and imaginative spirit that is always ready for new experiences in life – no matter good or bad – because curiosity is the key for growth and the pursuit of a love of live – an unlimited love of life to be exact.

The vibrant and eye catching album art attempts to visually manifest a celebration of difference alongside Evangeline’s free spirit, with bright colours, flowers and Evangeline with her trademark purple hair, inviting the listener in for what is seemingly promising a unique experience.

If any song is a testament to the above, it is the title track itself. Opening song Unlimited Love框不住的愛 is a beautiful song with painful origins, which has already become a favourite of the LGBT community, seen by some a new edition to the canon of mandopop gay anthems. The emotion heavy in Evangeline’s husky vocals, she describes someone blocking away the world around them, but camouflage isn’t neither a show of strength nor is it the life you want to lead. Instead, embrace life and love with pride because love – whether it’s for someone else or for yourself – is an unstoppable positive force, and to understand and be loved for who you are is as if you’ve come into the sunshine after a heavy rain. A powerful opener, it’s hard to not hit replay constantly. Although the song fading out at the end gives the impression that this celebration of love and diversity carries on into the rest of the album, as a standalone song, fading out a song feels a little lazy. However, the sentiment works in the concept of the record.

Seemingly Halloween inspired WHO is perhaps the most sonically unique song on the album. An amalgamation of tempos and genres, the song doesn’t let the listener rest long before switching it up entirely. With WHO representative of Evangeline’s fear of being herself as a result of ridicule, the listener is seemingly transported on this journey of self-doubt and uncomfortableness with her. This angry and dark rock/hip hop song is an uneasy reminder of similar times that we may have experienced, and a testament to both Evangeline & Skot that they can take the listener on this journey. Reminiscent of Japanese icon Tomoko Kawase’s gothic alter ego tommy heavenly6, it’s great at highlighting Evangeline’s versatility and willingness to experiment with differing styles and themes

Whilst it would be easy to label ballad Expiration Date 保存期限 strikingly simple, for a first composition, it is an admirable attempt, and doesn’t come across amateurish, and easily punches its own weight against the Skot Suyama produced tracks. Lyrically Evangeline takes a relationship and views it as having an expiration date, and that despite the pain that this involves, the time is simply up, and rather than be said, both parties involved should move onto the next stage in their lives, in turn playing with the concept of countdown and the finite life of everything. Not only this though, the song is reflective of her life and the four year time period she gave herself to make it in the music business. To take a sentiment unique to her and establish a trope that others can relate to en-masse is a testament to her lyricism and understanding of how to connect music to the general public (check out the English translation of the song here).

The complexity of this ballad comes in contrast to probably the weakest link on the record Breathing 深呼吸. Not bad by any means, but in comparison to lyrical variety and musical strengths exerted over the rest of the record (notably the only song which doesn’t in some way come under Skot Suyama’s jurisdiction), it’s a little mandopop by numbers.

Angel’s Voice 天使親吻過的聲音 has a distinctly autumnal atmosphere about it. Whilst a song that describes how you love your parents could very easily come across as corny or trite (As long as you shout my name, I have strength / As long as I can see your smile, I have a yearning), Evangeline’s lyrical interpretation of this sentiment elevates it to a rather beautiful song, enhanced by some of the best and most layered production on the album.

Whilst it’s difficult to choose a highlight on an album filled with many wonderful melodies and strong lyrics, a personal favourite is ‘Bye Bye’ 拜拜. As with other songs, the lyrics come from a place of pain – namely a non-consensual break-up. Yet again however, Evangeline is the poster child of optimism: thanking her ex for looking after her, she instead turns the table, and affirms that actually, their love was superficial, and that tomorrow will offer better. Infusing elements of rap with euphoric pop choruses, The 10/10 status of the song is certified at the unexpected but very welcome key change post middle-eight which won’t fail to bring a smile to the listeners face. Getting in a final insult which reflects the bitter taste of any broken relationship, to be so verbally free is to be free from the shackles, and, reminding them once more that ’there’s nothing about you.‘

Album closer Dreams 夢見 is stark and powerful in its simplicity. Evangeline’s voice soars across the piano led ballad, carrying with it the pain caused by death and the feeling of helplessness. The inspiration behind the track – being denied the ability to say goodbye when someone passes way – sees her try to get closure and let out her frustrations at the situation by communicating with her lost one through a dream, trying to balance the relief that death can bring of pain whilst also cursing that those we love can’t exist forever with us.

Though the star of the album is of course Evangeline, we can’t review the record without praising Skot Suyama’s production credits. Clearly understanding the depth and complexity of Evangeline’s vocals, her unique style of vocal delivery and indeed the words themselves,  Skot provides emotional yet accessible production that lets Evangeline shine, yet is able to assist the listener in becoming more emotionally attached to the record without relying on tired mandopop tropes. It doesn’t matter whether Skot is producing for Evangeline, Diana Wang 王詩安, Men Envy Children 小男孩樂團 (or one of the dozens of other artists he was worked for), his ability to adapt his sound to the artist whilst keeping his own unique style consistently present is a testament to his capabilities as a producer. Even when the record invites other producers to the helm, their works compliment the soundscape of the record, rather than feeling out of place,

At nine original tracks, it feels as if an extra couple could have been added if only to pad out slightly. But quality always trumps quantity, and for a debut record, there’s very little to grumble about here. Sincere, moving and joyful, Evangeline’s delivered a masterclass in how a debut album should be done, and not only delivers carefully crafted pop songs, but establishes herself as a writer and producer in her own right. However she chooses to utilise and her develop her talents, I can’t wait to see what the future holds for Evangeline – and once you listen to Wilder – neither will you.
​
4.3/5