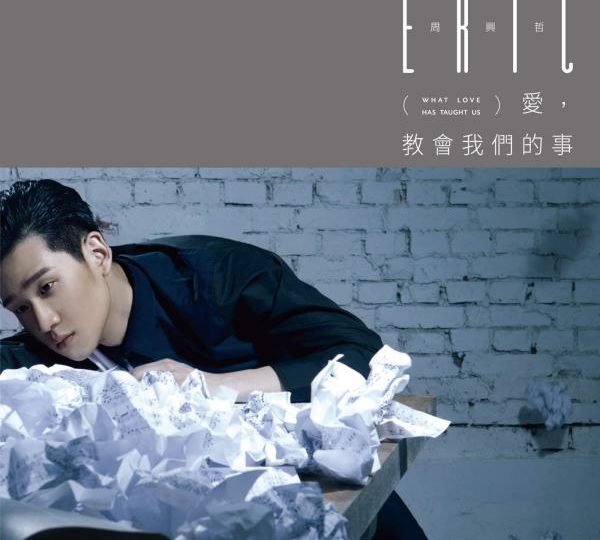 How Have You Been?
This Is Love

Following the success of his debut album “Learning to love“, soon-to-be prolific singer-songwriter Eric Chou has now followed up two years later with his second album, aptly named “What love has taught us“. Ever the sensitive type, Chou’s music is greatly influenced by some of the best balladeers of our generation, namely the likes of Jay Chou and Wang Leehom. As such, it is easy to mistake him for just another ballad-singing idol. But as he’s shown from his chart-topping success from the get-go, Eric is much more than just that. And although the theme of his second album “What love has taught us” seems to just be a marketing gimmick, tacked on to enjoy the success of his previous album, I really do feel that the take-home message from his newest album emulated his growth as a person and as a musician over the past few years.

His first single from his previous album “以後別做朋友 In the future let’s not be friends” was bittersweet in its rawness, but rather half-baked in its formulation. This was what I presumed to be the work of someone with talent pure and raw, but not yet completely schooled in the slick profession of music production. But after gaining a couple high-profile gigs, like writing songs for label mates Rosie Yang, A-Lin and Eve Ai, Chou has shown his clout as a songwriter and singer; his velveteen vocals catching in the throat of many a pre-pubescent high-schooler.

​And this album is no exception. His melodies retain their pure, emotional quality which was what made fans fall for Chou in the first place, but this time seem to be slicker in their conception. Case in point, his first chart-topping single “你好不好How have you been”. While enjoying a similar  level of success of “以後別做朋友 In the future let’s not be friends“, the melody of this song sits much more comfortably with me than the latter’s initially did. The transition between the verses and the chorus seems smoother, and in general the melody features more bite. The arrangement although uses the same elements of the piano and violin as in “以後別做朋友In the future let’s not be friends“, it seems so much more extravagant and luxurious rather than idol drama-y, which was the feel I got from it the last time. Seeing as it was the same arranger from “以後別做朋友“, I’m guessing Chou’s not the only one who’s grown in these past two years! The piano is subtle and hugs the nuances of Chou’s delicate voice while the arrangement has added bite from acoustic guitar pluckings and a kind of groovy forward-driving rhythm to it. Chou’s melody this time around is sophisticated and heart-wrenching, his voice exquisite in its execution of both the low, humble notes and the emotional falsettos. I, for one am for these very reasons unashamed to say that this was one of my favourite tracks on the album.

Another change that I’ve seen in this album is Chou’s further ventures into the EDM genre. While in the previous album his interest in electronic dance music played second fiddle and was rather vague in its direction, Chou’s come full force this time, including three Electronic tracks in this album, “負一分鐘 One more second“, “Let it go“, and “我愛的那種 The type I love“. And they’re all pretty different genre-wise too. All three were much better produced than Chou’s previous attempts at electronic music, and would fit in quite nicely with other international attempts at the genre. In saying that and although I found both songs quite pleasant to listen to, I felt that “Let it go” and “One more second” especially were rather generic in their uses of the genre. “The type I love” however was produced by Starr Chen, and certainly reprised his signature cheeky and colourful musical style. Chou really ran with it too, which gave listeners a new perspective on Chou’s versatility outside of his penchant for love ballads.

Other than that, the other standout point were of course his love ballads galore. Now before anyone says anything, I know better than anyone the deal with all these love ballads-there’s often too many of them, and they always turn out to be generic but somehow still clinch a spot on the top 100 charts just because. But the thing with Chou is that he has the ability to write love ballads, like REALLY well. And he has the voice for it too. “你好不好 How have you been“, “This is love“, “愛情教會我們的事What love has taught us“, and “想回到那一天 Go back to that day” are all catchy, well created songs with melodies that tug at your heartstrings while keeping things fresh.

“This is love“, which is my favourite track on the album is more of a happy ballad with an R&B influenced arrangement. The lyrics and melody truly come together in this song to create a song that is full of serendipity and truly shouts ‘This is love’. When Chou himself sings the words ‘cos this is love’, that sense of being enlightened and surrounded by good vibes as everything comes together reinforces to me the theme of this album perfectly, as it truly has in some ways taught me something about love. That love cannot necessarily be expressed by words, but by a complex mix of emotions. Of exhilaration, of excitement, and a head full of happiness. Chou’s warm vocals, too full of knowledge to belong to a 21 year-old really make this song a ten out of ten for me.

The other ballads are roughly more similar in their feel but nevertheless are a good listen. “愛情教會我們的事What love has taught us” has a slightly Chinese traditional influenced melody and has an elegant melody that is understated but hits hard, especially with the pulsing backbeat to the song and slight electronic influence. Chou’s voice here is honest and full of gratitude. Like I said, this guy’s just good with ballads, there’s no two ways about it. His voice is sentimental and versatile enough to sing about love in any shape or form, reworking it so that it’s a refreshing listen time and again.

But that’s not all Chou sings about. I also found pleasure in his upbeat, more acoustic tracks, namely “No one like you” and “明明Obviously“. “No one like you” is just a real feel good track that almost has a disco kind of feel to it that is paired off with Chou’s hipster whistling and a little acoustic guitar thrown in there somewhere. Although interesting, I do feel this song is a little confusing in all its different elements. English lyrics I feel are also not Eric’s strong point, as they sound rather banal and not very meaningful to me. A cute song nevertheless. His other acoustic song “明明Obviously” is right up my alley as it was influenced by the likes of John Mayer and Sam Smith. Chou says this is his favourite song on the album, and I can certainly see why. An acoustic guitar with a hard groove that drives the song forward, these two battling elements, that of the superficial and the deep reflect the feelings of being trapped and repressed that the song’s lyrics speak of.

Effortlessly listenable, Chou’s second album is already a step above many other albums by fulfilling this difficult criteria. Yet it was also surprisingly able to reflect its theme very well, which is usually not the case with these types of love-themed albums. Chou has the ability to pinpoint particular emotions and inject them fully into his songs to create moving works that are irresistible even to the most hard-hearted of audiences (I speak only for myself when I say this). Given his obvious talent and versatility, Chou is an interesting example of someone who straddles the line between critical acclaim and mainstream pop. He has the talents to reach that critical acclaim, but at the moment I feel like love songs aren’t enough to increase his clout. In the future, I’d like to see if he can take his music and his lyrics to a more meaningful level that would really challenge him as an artist, as this chart-topping stuff which others struggle at seems to be mere child’s play for him. A great album, all I wish was that there was more of it. Now excuse me while I replay the album again.