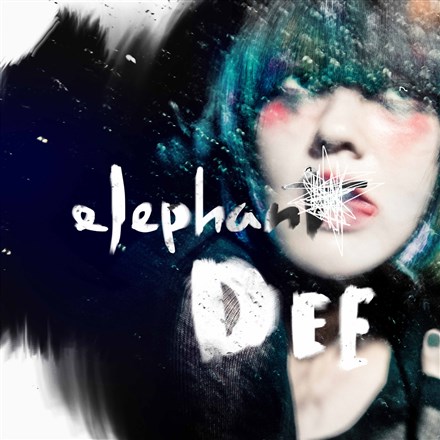 I’ve known about Xiao S’s musical dreams through her constant mentioning of songs that she’s written during her time hosting the infamous but insanely popular talkshow <Here Comes Kangxi>, but nothing prepared me for what I heard on her five-piece EP which she wrote the lyrics and melody for. Produced by the likes of Mavis Fan, Chen Jian Ning, I’m actually surprised they even let her pick these songs to be released. The only thing that this album is well-versed in is a solidly produced and arranged set for all five songs, but on Dee Hsu’s part, I’m sorry to say that I wasn’t at all impressed. What I look for in an artist-whether Indie or Mainstream is for something different, but also for creations which are so very ‘them’. Writing lyrics and melodies are a way of expressing personal creativity, but the songs that are presented here in this five piece EP are certainly not Dee Hsu, or Elephant Dee or whoever she tries to make herself out to be. The melodies are plain, punctuated with vocal shrieks and gasps on Dee’s part to try and make up for the lack of uniqueness of her songs, while the lyrics are ghastly in terms of depth and an concerted effort to have some sort of effect on the world around us. Music isn’t just about my, myself and I. It’s about showing listeners the world through your eyes in a way where they can relate to it and observe. But what I see here is a self-centred, narcissistic effort by Dee Hsu to barrel her way into the world of indie music and to become someone entirely different-someone she’s clearly not.The first single <Blue> was produced by Mavis Fan and Chen Jian Ning as a very Jazzy piece, supposedly to enhance this atmosphere of ‘blue-ness’ within the song, but the thing is that Dee’s voice doesn’t seem to be technically advanced enough to create that emotion of ‘blue’ in her voice. Not saying that she sang it badly, but I just don’t hear the Blue in her voice, instead the in-your-face attitude that she uses on this song combined with the minor key makes me think of Black rather than blue, a serious mistake when the name of your song is <Blue>. Furthermore, the lyrics don’t make sense, nor do they even have any depth of any kind. Any kindergartner knows that the sky is blue, but I really don’t see the meaning behind saying that everything is blue. Simplicity without an actual meaning; Dee’s lyrics just string together objects and words that sound good in a song without much more thought given than to what is on the surface.

Her second track <五妹娘 Five-Sister Maiden> tells the story of a maiden who eats and eats and eats and eats, and basically becomes really fat. Perhaps in Dee’s mind the story sounded whimsical, charming and elegantly morbid, but to the ears of listeners, forming a grotesque and crude picture in their mind is really not going to help your case. With lyrics describing how fat she is until she could explode, and even telling of how the five sister maiden would even eat faeces. The spoken interlude goes on to talk about a random dog that the five sister maiden hates just because she likes to hate on things. Honestly, Dee’s attempt at being abstract is failing as we understand what she’s trying to say, but not in the way that she’d expect. What saves this piece is the big band arrangement, which really brings out a kind of 1920s swing feel to the song. Vocals-wise Dee is still a little lacking but I can tell she’s trying.

The third track <心脏喷血 Blood Gushing From The Heart> is another one of Dee’s attempts to shock listeners into a kind of perverted attraction to her music. Her abrupt shrieks at the end of every sentence in combination with her talking-singing style of vocals are just strange combination that doesn’t seem to work together. The extended shriek in the middle of the song followed by mini shrieks that sound like the sound of chihuahuas barking also doesn’t help her case. The entire song’s melody is composed of a total of about 5 or 6 notes which shows a lack of thought in composing. Here, Dee is not composing, but more creating a shaky foundation for herself as a art music artist; a genre in which she seems to have absolutely no experience in. She aims to shock rather than to please, and judging from the way she chooses to express herself, I think she has some serious insecurity issues that she needs to get help for.

In the fifth track, the real Dee is revealed in a cute track featuring the sound of Dee talking to her daughters, and singing with real honesty and warmth for once. Although she’s repeating some of the same words that she used in her first track <Blue>, what she’s really trying to say does come through, and actually makes me feel something other than shock.  A really cute song with a subtly sophisticated R n B and Jazz inspired arrangement. Simplicity that really sticks. I suggest for Dee’s next album, go back to basics and stay true to the kind of music that really suit her; because that’s where good music comes from – the heart.

Overall, my ears are kind of hurting from her shrieks and somewhat abrasive music. A big plus on this entire album was the seamless production and arrangement of the EP, but unfortunately it wasn’t enough to cover up the flaws in the melody, lyrics, and vocals of Elephant Dee. I know Dee’s always had dreams of becoming a singer, but I suggest that she do a little bit more research and reflection before taking on such a abstract genre as her first EP introduction. My advice for her is to look deep within herself and stay true to her taste in music, rather than aiming to shock listeners into submission.