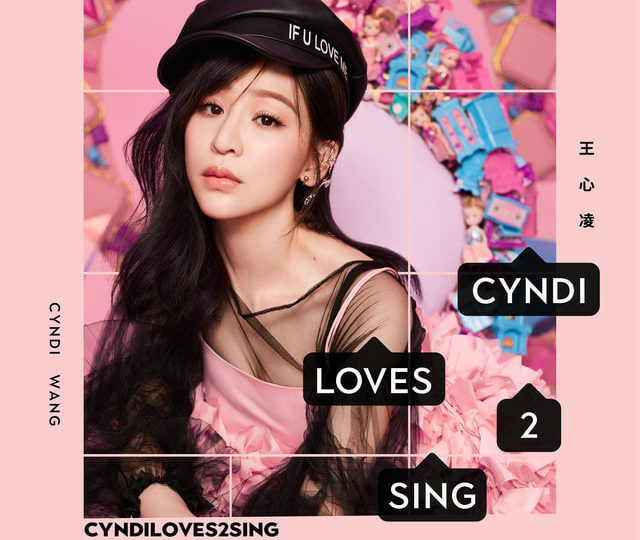 It’s almost surprising that Cyndi Wang 王心凌 has been a staple of the Taiwanese music scene for sixteen years and that at one point, she was one of the top female popstars in Asia, regularly selling over a million copies of her albums across the continent. Whilst nobody would argue with her commercial success, it’s less difficult to pick at the records themselves, which in recent times have been patchy at best, and dated on arrival at their worst. Plagued by criticism, rumours of cosmetic surgery and tabloid gossip, it has felt as if the sun had begun to set on Cyndi Wang the popstar.

Coming three years after her last record, CYNDILOVES2SING 愛·心凌 is Cyndi’s twelfth record, and it seems as if she has something to prove. A ten track affair, the aim of the record is to express the personality of Cyndi, offering listeners an insight into her feelings and characteristics, be it strong, vulnerable, care-free or spontaneous. She’s also brought in a top team of producers and songwriters, including Mandopop icon Sandee Chan 陳珊妮, producer and guitarist Jerry C 張逸帆 (S.H.E, Lala Hsu 徐佳瑩) and American producer CJ Baran (Britney Spears, Carly Rae Jepsen) to help bring this project to fruition, signalling that this time, Cyndi’s taking this seriously. Can she reverse her dwindling fortune?

The answer is an emphatic yes. From the offset, listeners are greeted by an altogether more sonically mature Cyndi. Album opener The Coffee Shop Lost in Youth在青春迷失的咖啡館 is a wonderfully textured and understated indie-pop-esque ballad, presenting a never before seen, more mature Cyndi, whose voice flutters lightly over the melody whilst delivering some of the most grown-up lyrics we’ve ever heard from her (the most painful feelings are the most profound lies.. /.. love is not necessarily true).

Absolute standout of the album is The Thunder on your Road 劈你的雷正在路上. Delightfully bizarre, production wise the song features elements of multiple genres as wide-ranging as reggae, dance and electric guitar, whilst the most memorable musical aspect is what can best be described as a cowboy whistle. Cyndi surprisingly isn’t overshadowed by the stellar production, and instead commands it, sounding confident yet laidback in her delivery, singing about the mess and ridiculousness of current affairs. Not only is it one of Cyndi’s most innovative tracks, it is arguably also one of her best.

The acoustic I Don’t Exist Anywhere到處不存在的我 is not only memorable because of its stripped back production values which have a sense of rawness and vulnerability, but also because Cyndi actually sings parts of the chorus in Taiwanese, perhaps a hint at the personal value and attachment to the song (is it right to leave? / my heart has no answer yet).

Truthfully speaking, CYNDILOVES2SING is surprisingly filled with memorable moments. From a ballad perspective, the melodic Life’s Most Beautiful Imperfection生命中的美好缺憾 has an emotional and powerful stadium-ready singalong chorus, whilst The Big Sleep大眠 wouldn’t sound out of place on a Li Ronghao 李榮浩 album, lyrically presenting a unique narrative, touching upon emotional abduction, moral blackmail, and the role of each person in a relationship.

It wouldn’t be a Cyndi Wang album without some up-tempo bangers, and this album certainly delivers. Whilst Sheep in Wolf’s Clothing 披著狼皮的羊 doesn’t tread unfamiliar territory, with elements of progressive 90s house in the verses before a tropi-pop beat drop, Cyndi stays away from  outdated production and helium-esque vocals. Whilst it would be easy to brush this off as potential filler, its tracks like this that are the most visible aspects of the jump in quality on this record compared to dance-pop tracks on her other recent records.  Similarly, album closer Sleeping Forest沈睡的森林 doesn’t feel tacky at all, instead being a wonderfully layered and softly detailed mid-tempo EDM track.

Alas it’s not all smooth sailing: one song that breaks away from this welcome jump in quality is Cat Teaching a Seagull to Fly教海鷗飛行的貓. That someone thought sampling Old MacDonald had a Farm was okay makes us seriously debate the taste level of Cyndi and her team, unfortunately cheapens the overall album, and is a reminder that as much work Cyndi has done to elevate her sound on this record, old habits die hard.

It’s hard to not view the title CYNDILOVES2SING as a mission statement. After years of dwindling returns, it seems that Cyndi Wang realised that if she wants to maintain relevance, she would have to prove to the audience that she was worth once more investing in, indeed proving that she loved to sing. Cyndi has done much more than that on this record; evidencing a level of maturity and artistic growth that many thought was beyond her, whilst still staying true to her authentic musical self. A watershed album in Cyndi’s career, whilst it’s not going to change the pop landscape, only a fool would see this album as any less than a triumph.
​
3.9/5