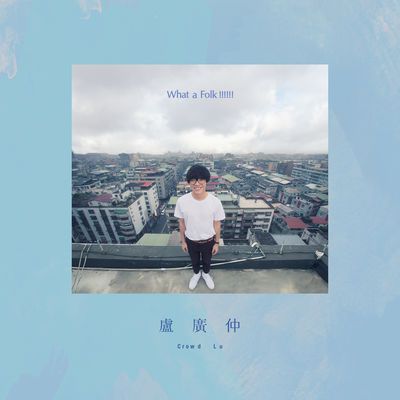 Due to some events especially in the second half of 2016, I’ve been finding more and more that my mindset (and as a result my tastes in music) are slightly changing. Previously, I’d adopted a ‘go hard or go home’ mindset which aligned more with vibrant tracks that were upbeat and rhythmic. However lately I’ve been really trying to figure out a more sustainable way of chasing my passions, hence I’ve been more into folk music, or really just any music which is soothing, acoustic and promotes mindfulness. And Crowd Lu’s latest album “What a folk!!!!!!” appears to be everything I’ve been looking for and more.

Combining his previous banally happy brand of music with a heightened sense of self awareness, Lu’s latest album is a demonstration of his maturity over the past few years, in which he discovered that sadness or periods of melancholy are indeed useful, instead of forcing a constant stream of happiness. I guess I’m really able to relate to this album as it reflects a mindset change that I’ve been experiencing, rendering this album even more meaningful to me. Lu’s new perspective really comes through in the tracks from his latest album, which is completely organic in its use of wooden, non-electronic instruments, and its subscription to the folk genre.

Songs like “Happy Chakra” and “Smartphone II” reprise Lu’s signature happy, yet nonsensical nature, while the majority of the album reveals a more serene, sombre side to him. As this is the first time I’ve ever taken a close look at Lu’s music, one thing which stood out to me was his actual aptitude for singing. Although I’ve always chastised Crowd for his nasal, almost stream-of-consciousness singing style, in songs such as “4.95m^2 Dream” and “Smartphone I” I noticed his skilful use of melismatic techniques commonly used by Taiwanese-language singers that many other pop or even independent artists of his generation would not be able to pull off.

This led me to think more deeply about Lu’s choice of singing style. It was not that he could not sing in an aesthetically more pleasing manner, it’s that he simply chose not to. And having that choice really makes a big difference. It reflects upon Lu’s versatility as an artist; not only does he have the capacity to sing as well as any other mainstream artist on the market, he also has gone above and beyond to create a singing style which reflects his personality, and is uniquely him. This is something that very few can claim to have done.

Going back to “Happy Chakra” and “Smartphone II”, the former was a very simple ditty composed in Lu’s larrikin style. With no lyrics except du-du-du’s, only guitars and some masterful trumpet mimicking skills in the arrangement, the song’s simple melody goes round and around in Lu’s unassuming, cheerful tone, just like a happy mantra that can will any bad day to turn itself around. “Smartphone II” was instead a heavy rock interlude-type-deal which Lu’s team somehow managed to put together using majority of acoustic instruments. Add in some erratic screaming in Taiwanese to ‘stop looking at your phone’, you’ve got yourself a great ringtone reminder at the very least.

Sentimental favourites on the album include “4.95m^2 Dream”, “Smartphone I” and “Trust Yourself”. As I’ve rarely heard Lu write ballads, “4.95m^2 Dream” and “Smartphone I” are a refreshing insight into his musicianship. Unlike his 110% happiness packed signature tunes, “4.95m^2 Dream” features an organic and thoughtful folk-inspired guitar arrangement that is subtle in its delivery of emotions. Nudging the song gradually to a soulful peak, Lu’s warm and steady vocals render the flow of the song as steady as waves crashing onto the shore; conveying a simple set of emotions and themes in an effortlessly meaningful manner. “Trust Yourself” was another standout point for me, and was the song which attracted me to the album in the first place. With simple lyrics co-written by Cheer Chen that deliver a simple but optimistic message, this song is so comforting that it’ll be able to tide you over any bad day. A very simple guitar arrangement with some simple percussion sets it off just right.

I also love how Lu incorporates themes of societal issues into his album, not only with his critique of smartphones and how people use them too much, but another track I truly recommend is “Sleep Here Tonight” which is dedicated to the homeless. In this track, Lu tells a compelling story about a young person who spends their days and nights sleeping in public places and train stations, shining a light upon a situation rarely espoused in Taiwanese music. Yet his lyrics talk about it in such a kind and encouraging manner; as is Lu’s style of social activism that it is admirable to just listen to the care that he’s put into the song.

My only qualm with the album would be that although the album is supposed to be folk-influenced, at several points throughout I felt that it was more putting a folk-influenced arrangement to Crowd Lu’s own melodies, rather than the melodies taking on obvious folk-like qualities. Given that the title of the album was inherently linked with this genre, I felt like they could’ve paid more homage to it, but Lu was nevertheless able to strike a rather happy consensus between having his unique sound heard and incorporating folk elements into it.

Lu’s “What a folk!!!!!!” is an album I will never get sick of. I am completely in love with what this album stands for; a call out for greater awareness of social issues that surround us, while also really reflecting Lu’s personal ideas and new perspective on life while retaining his happy-go-lucky personality and signature sound. Crowd is truly a rare species of performer in many ways; he was able to develop his own signature singing style, his own songwriting style, and also has managed to strike a skillful balance between his personal changes and his musical identity while holding on to his critical acclaim. An album that I truy recommend to all of you, especially when you’re feeling a little down or just have a moody day. Crowd is sure to cheer you right up.