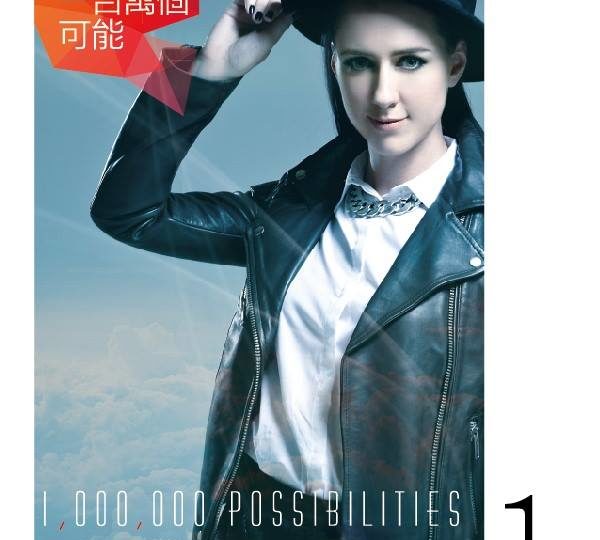 I know it doesn’t look like much, but Christine Welch’s debut album is actually one of my most anticipated albums of the year, especially because of my favourite producer Skot Suyama’s extensive input on the album! And I was definitely not let down by what I heard on this album. Every single song was produced by Skot, with most of them written by him and Christine! Considering that this is an album borne completely from a passion for sharing music with the world, to me, this is truly an album full of a million possibilities. By how this album sounds and her many skills, Christine’s future also seems to be paved with a million possibilities! Composing her own songs, writing her own lyrics in a language that isn’t her mother tongue, singing in Chinese and handling the release of this album all by herself (she isn’t signed to a record company so released it independently) is a feat in itself, so I really think she’s done a stand-up job overall! Having impressed one of the best producers in the Taiwanese music industry enough for him to write an entire album with her; Christine isn’t just any aspiring singer-songwriter!When I heard the first track <Don’t Go>, I got tingles all up and down my spine from the first arpeggios from the piano. Playing it simple, the dreamy piano arrangement holds a hint of something darker; something more, and soon enough transitions into a rock-inspired chorus. Despite Christine’s pristine vocals, her astounding range and sweet lightness of her voice blends perfectly with the rockin’ arrangement. The elements in themselves are simple, however when combined together are just orgasmic in the dynamic quality of the song. The bridge in itself is a piece of art, building on a single voice with three layers of harmonies, then adding in the electric guitar, building suspense before leading up to a headbanging release that seamlessly brings the chorus back in, before ending the song again with a single voice, leaving us wanting more of the delicious melody. The way suspense is built in this song is phenomenal, and I do feel that it’s in part due to Christine’s unique singing style. She’s taken the melisma in her voice and her unique way of fitting Chinese lyrics to the melody and brought a new singing style, and a new sound to the Taiwanese music scene, not only in ‘Don’t Go’, but just throughout this album in general which I think is just awesome. The scene’s lookin’ for a change at the moment, and Christine is certainly giving them change!

The second track, <一百萬個可能 A Million Possibilities> is one of my favourite songs on this album (although it really is quite a tight competition as I absolutely love all the songs on it)!  Right off the bat, I get this pure, calm feeling of serenity that just emanates from the song. Christine may make a pretty great rocker chick, but the tinklings of the piano suit her sweet voice perfectly, and I really couldn’t think of a better combination. Also the lyrics she wrote are skilful in their approach; a fusion of a traditional chinese poetry style with actually quite a western imagery, which really creates a refreshing chemistry, and adds even more so to the feeling of cleanness and freshness of this song in all its aspects. Christine’s lyrics are also really meaningful, interweaving an imagery of snow covered scenery with the idea of waiting for a lover, before taking these two ideas and putting them together to create true poetry with a sense of direction, imagery and narration. A perfect song to be the title track, as it encompasses all the possibilities that this album holds. Christine herself is an embodiment of this idea of a million possibilities; to her, the possibilities are endless and she takes any opportunity that comes her way. If she hadn’t taken a chance on so many things she wouldn’t be the same Christine we see singing for us today, and I really think that makes this album and its concept even more empowering.

The third track <尋尋覓覓 Searching> was actually a massive hit in China; there’s nothing they like better than a foreigner singing songs in their own language! But what made it such a phenomenal hit with over a million views was that on top of that, it was a great song with a catchy melody, AND with an eastern influence to it too. Christine can speak Chinese better than a large majority of the Taiwanese population, and just like her, this song is a smooth and seamless fusion of east meets west. Starting off with a Southern country twang on the guitar, Christine’s voice brings a roundabout turn to the atmosphere of the song from her first note; Skot’s usage of traditional Chinese pentatonic keys creates an unmistakably Chinese feel to the song, as does Christine’s voice, which uses its unique melisma and pitch perfect sweetness to bring a Western twist to a more Chinese Operatic style of singing (note her ‘ah’s). The harmonies are just to die for too, with beautiful Chinese lyrics once again following the traditional Chinese poetry writing style. A song that truly defines the meaning of ‘East meets West’. Eat Christine’s dust Wilber Pan!

<不會頭 Don’t Look Back> is a little more grunge rock than the previous songs, but is no less memorable. It’s a typical Rock song, but Skot makes it a lot more special by creating a melody with a lot of bite to it, making full use of a heavy, headbanging rhythm to drive the song to its best ability. I think it was a great song to use as a duet too, no matter how unlikely it sounds. Christine’s voice is a little too high and clear to take on this rock anthem on alone, and the gravelly voice of Lao Die (I still have no idea who he is) creates a perfect equilibrium in the song.

The song in this album that I just can’t get out of my head! Another one that always comes back to me is a song that Christine wrote by herself, called <你不能了解 You Can’t Understand>. I don’t know what it is about this song, but to me it’s like hearing a different side to Christine which is a little more westernised, especially with the punk influences thrown in there too.  Lullaby crossed with pop, a really interesting combination that Christine’s brought to the Taiwanese music scene!

<希望永遠存在 Hoping To Exist Forever> is actually a theme song for an anime, and it sounds exactly like it came out of an anime too! But it still gets me up and moving like nobody’s business, which is what I really love about Skot’s songs. They really make you feel alive, and that’s really what this song is about! being alive, and putting your best foot forward to achieve your dreams. Just like the lyrics, the rhythm of the song never gives in, pumping endlessly and creating a high like you’ve never felt before. Hopelessly addictive. But for all her prowess in writing Chinese lyrics, Christine’s english version of the song seems a little stilted in its lyricism. Too much time spent in Taiwan perhaps? A good attempt nevertheless, with heartwarming lyrics.

Finally, an acoustic version of Christine’s hit <That’s How It Is> tops off the entire album with a feel good, subtly sassy feel. The harmonies are absolutely orgasmic and its just amazing what you can do with just vocals, guitar and a little bass. I’m totally lovin’ it.

The only thing is that I really don’t feel the album art and the album photography did her and the album concept justice. I feel she has a really edgy personality with a lot of vibrant colours given her many skills and talents, and really felt like she could have done better than a generic album cover (kind of looks like Jane Zhang’s ‘I Believe’ album cover. Would’ve caught many more people’s eyes too, but there’s always room for improvement right?

Wrapping up the entire album feels really good, because there’s just so much in these eight songs that you could sit here analysing, listening and enjoying for days, weeks, months on end. I’m so happy to finally hear Skot and Christine’s collaboration come to light, and I hope to hear more very very soon. The Taiwanese music scene has been lacking a little lately; and sometimes it just feels like they’re exchanging quantity for quality. but this album is the exact opposite. It’s a reflection of Christine’s many selves and of course the many possibilities that she’s left facing. Multi-talented and seemingly infinitely skilled, I’m sure she’ll go far. She definitely is bringing something new to the Taiwanese music scene, and I’m excited to see what she makes of it. I believe in her so much it’s not even funny. A  wonderful album that just leaves me speechless.