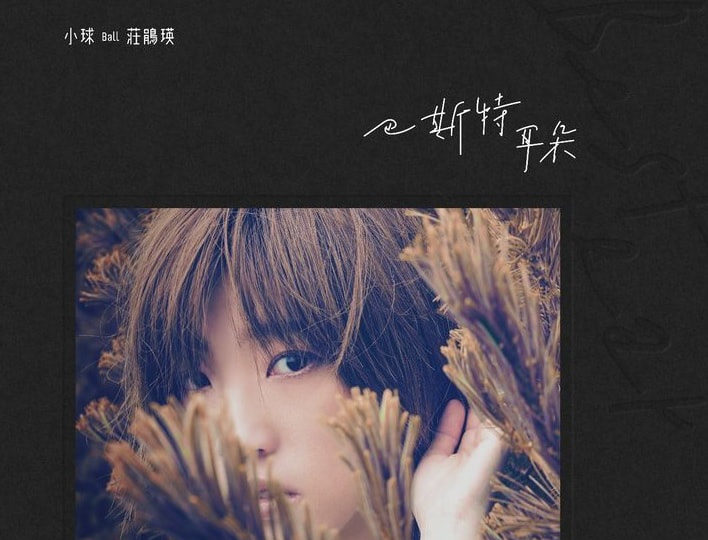 By Matt Taylor
​
Ten years strong into her career, Ball Chuang (莊鵑瑛, or 小球 to her fans), is ready to impress audiences once more with her sophomore solo record, the curiously titled Best Ear 巴斯特耳朵, the follow up to her 2017 solo debut, the generally subdued yet endearingly optimistic Towards the Stars 星之所向.

Ball rose to fame through being half of indie-pop duo katnkandix2, whose guitar driven melodies, anthemic sing-a-long choruses and often unique takes on typical song structure earned them not only nominations for Best Vocal Duo at the 21st & 24th Golden Melody Awards and the award of Best Album of 2010 by INDIEVOX respectively, but an army of devoted fans who ensured that they became the international poster child of Taiwan’s indie scene at the turn of the decade.

What exactly is the meaning of the title Best Ear? On the most superficial level, the title is a play on award-winning 2006 book Buster’s Ears by Swedish author Marie Ernestam: a bitter-sweet love story filled with love and deceit. Scratching the surface further reveals a more significant meaning, with Ball deciding to take this title and reinterpret it from her own viewpoint. She has often said about her work that she sometimes can’t tell whether she is listening to her own songs, or to her own voice. She therefore wants to use this album as an opportunity to speak to the listener, acting somewhat as a tour guide and interpreter. Life, like the novel, is an onslaught of bitter-sweet stories, deceit and lies; something that Ball is all too familiar with, and wants to help the listener navigate through via her own experiences.

As soon as the play button is pressed, the listener is gently welcomed into Ball’s world, with a haunting introduction Dream Song 夢中歌  intended to symbolize the fall into a dream, where we are no longer in control, but rather at the mercy of our own minds, or in this case, Ball’s words and stories.

Best Ear picks up where – quite literally – her debut solo record left us. The first full track is titled Freedom 續, and is based on the outro of her debut (titled to be continued…). Between the first and second record, Ball decided she wanted to employ this tactic so as to imply that no story stands alone, and even when accidental, everything is inter-connected. What she didn’t know however is what the final iteration would sound like. From the bare bones near-acapella outro, the eventual result is subtle verses flowing naturally into crashing choruses where her vocals soar with ease, representing that after every action and feeling, regardless good or bad, that life ultimately goes on.
​
Delving further into the concept of the record, Why Remember 何必記念 and Private Attraction私房景點 work as companion pieces, offering different experiences on the topic of death. Why Remember 何必記念 is a piano led ballad evoking feelings of nostalgia, written seemingly from the part of the deceased, begging to not be forgotten, whilst the song itself has an overarching sense of finality. Private Attraction 私房景點 on the other hand takes the perspective of those who have lost someone, which despite still being achingly sad, offers hope that someday in the future, they will be re-united (Goodbye, goodbye, goodbye.. / the story that was last told is not finished yet / I will wait patiently, wait for you to appear).

Ball’s intelligence as a musician and capability as both a songwriter and a storyteller truly come alive on these two songs. Whilst it could come across overwrought or saccharine in the wrong hands, Ball displays profound skill in exploring differing views of the same theme, and her attention to the small intricacies in both tracks are strikingly human: it was always the small things that we remember the most fondly.

Jigsaw Diary 拼圖日記 is the closest we get to a fun, truly joyful moment on the record. A simple clap-drum and piano intro leads us into a luxuriously layered track brimming with joy and warmth, where she compares life and this relationship to a jigsaw: whilst it may be frustrating and time consuming to find the right piece and try to make them fit, to create something whole is a wonderful thing. Once again we see Ball’s meticulous attention to detail on display, and she is able to ingeniously connect this song with the overall concept of the record itself (I understand I will be your best ear / just tell me, don’t be shy.. there is no right or wrong), that life itself is a jigsaw. What could be heavy-handed, Ball does so subtly that it’s barely even noticeable, a truly remarkable achievement.

Abnormal Normal 不正常的正常 is a sharply delivered mid-tempo, almost Irish in its execution, employing instruments in ways rarely used in Mandopop. A perky instrumental coupled with bleak lyricism, Ball laments her imperfections, and hopes that someone can love her for who she is, and highlights that although we all feel not normal at times, that this is actually normal, so not to worry.

Outro track Unfinished like the beginning of both a new chapter and ultimately our own journey as Ball disappears and tells us to work hard. A surprising addition which doesn’t often appear on contemporary albums, waiting patiently after the outro will give the listener a beautiful acoustic bonus track not listed as part of the track list, its simplicity and directness so different to the complexity on display on the rest of the album.

There’s very little on the record which even the most ardent critic couldn’t appreciate. The song after which the album is named is a gloriously dramatic James Bond-esque slow-tempo, employing what seems like an entire orchestra and mixes tempos and uses the same instruments in a variety of means, showing a side of Ball we’ve never seen. Bored When Fun無聊當有趣 is a playful number, reminding us that sometimes it’s okay to vent our frustrations. Final track on the album, the understated yet sweet Answer答案 is a reminder that it is the scars we hold from our own stories that make us our own storyteller.
​
It’s clear on this record that Ball – without sacrificing melody or songwriting quality – is testing the limits and capabilities of her artistry, in turn truly establishing herself as a mature and wholly capable solo artist. An admirable feat, we can’t help but mourn the lack of a high energy blast of pop-rock which would frequent katnkandix2 records, or appeared briefly yet brilliantly as At This Moment 此時此刻 on her debut. Whilst aggressive, grunge inspired Hedgehog刺蝟 comes close, it’s slightly too aggressive to be placed alongside this style in her canon.

Ball’s distinct tone has long set her apart from peers. Affectionately described as having a voice that feels like a hug from a stranger, her tone emits a distinct familiarity and warmth that is instantly capable of enveloping even the most hardened listener. This unique skill doesn’t limit the scope of her artistry to ballads however, neither does it limit the authenticity of when she dabbles in other genres.

Simultaneously sweet yet assertive, familiar yet refreshingly new, fascinatingly detailed and complex yet also an easy listen, on Best Ear Ball displays a level of artistry and maturity that arguably puts her miles ahead of her contemporaries. Ball successfully executes a complex concept to create a united body of work; a piece of work that despite every aspect feeling necessary, each part can be enjoyed individually

As winter arrives and the weather is getting colder, this record is a perfect chilly morning accompaniment, either wrapped up whilst outside or enjoying a warm drink observing the melancholic sky and the people walk past. Filled with strong melodies and impressive & emotive vocal performances, Ball Chuang has entrenched herself as a vital part of the contemporary Mandopop landscape.
​
4.5/5