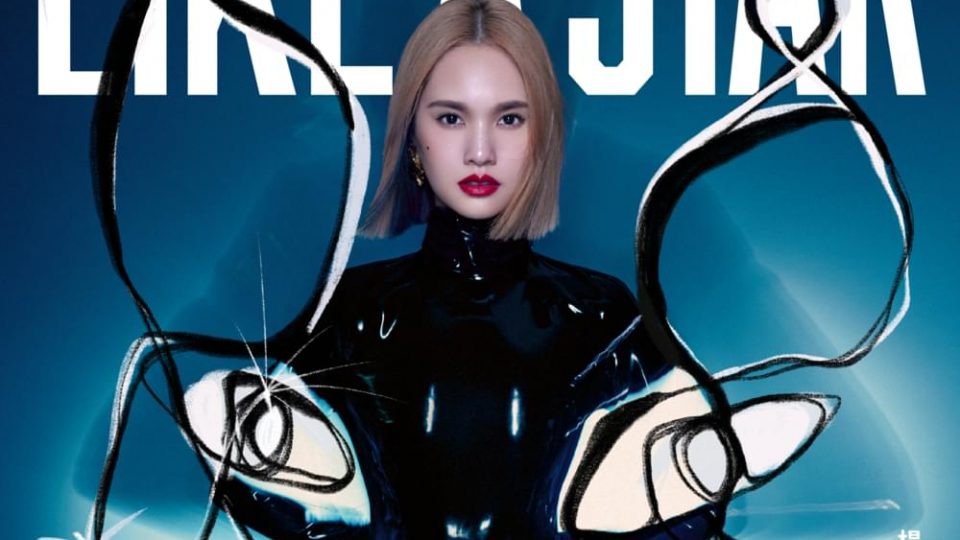 Since her debut as part of short-lived girl group 4 in Love two decades ago, Rainie Yang 楊丞琳 has established herself as a card-carrying member of mandopop’s A-list. Over the eleven records she has released as a solo artist, Rainie has evolved from cutesy teen idol to a serious musician willing to be sonically and visually innovative as well as lyrically challenging, even venturing into producing her own music.

To celebrate such a landmark moment her career, Rainie has released twelfth album LIKE A STAR. Rather than continue on her current artistic trajectory, Rainie has instead decided throw caution to the wind and undertake a fresh challenge, attempting styles of music and playing with imagery that she has never before dared. To bring this vision into fruition, a star-studded team has been enlisted that includes Starr Chen 陳星翰, Li Ronghao 李榮浩, and Karencici, alongside many others.

Introductory track and Jolin Tsai 蔡依林-esque BAD LADY is a near perfect piece of contemporary trap-pop, and unlike anything Rainie has attempted previously. The track is aggressive in its use of hip hop and 808 drums, yet Rainie sounds completely comfortable as her voice is distorted by autotune. Such a radical departure from her regular sound runs the risk Rainie sounding out of her depth, but as a testament to her ability as a musician she sells it convincingly, as she implores women to be confident in themselves.

The video is also a spectacular moment, with Rainie channeling infamous bad ladies such as Cruella DeVille and Harley Quinn as she expertly maneuvers dance moves from the internationally renowned choreographer used by dancing queens such as BLACKPINK and Jennifer Lopez.

SINGING IN THE RAIN is another album highlight, and lyrically represents the concept of missing. For Rainie, that can be interpreted as missing her husband Li Ronghao who she has been separated from due to Covid-19, or her friend Alien Huang 黃鴻升 who sadly passed away earlier this year. A mid-tempo Jazz and retro R&B affair, the song brings out the richness of Rainie’s voice, and highlights her ability as an orator, capturing the sentimentality and emotional aspect of the song with intricate detail. Relaxed, romantic and at times sensual, the track successfully captures both feelings of sadness and acceptance (I just be normal, suddenly I just wanna sing a song / Cause you’re in my mind, I just wanna sing, wanna sing a song).

A personal highlight on the record see’s Rainie team up with mandopop princess Cyndi Wang 王心凌 (who herself successfully evolved her sound on 2018’s CYNDILOVES2SING) for the funk and disco crossover empowerment anthem GIRLS 女孩們. Over a breezy and cheerful production led by ØZI & Razor Jiang 剃刀蔣, Rainie and Cyndi empower a new generation of women to live their lives how they want, and urge them not to conform to patriarchal expectations. The song also cleverly uses typically discriminatory stereotypes and instead turns them into positives, as well as calling out men for using what seem like sweet words to pigeonhole what women can and cannot be.

We see Rainie’ artistic capability to successfully tackle sounds and concept imagery outside her comfort zone across the record. The Starr Chen-procuded INDULGING 漂流浴室 is a sensual and exploratory ethereal EDM number which sees Rainie use her imagination to transport herself to another world as her bathwater to subsume her. Rainie teams up with breakout idol star Chen Linong 陳立農 on PERFECT MATCH 配對配 to send a message that regardless of age, gender or distance, a true love is unbreakable. The listener even hears Rainie take on neo-soul on the final original song on the record, the Peggy Hsu 許哲珮 produced CUZ OF U 都是因為你, a love letter to her fans thanking them for their long-standing support and dedication.

The obvious downside to the record is the length. Although on first inspection it seems like a respectable ten tracks, taking away the introduction, one interlude and a BAD LADY remix, we are left with seven original songs. Of those, we had already heard three of the songs before the record even released, meaning there are just four songs left to be discovered for the first time. Frankly, the best songs on the record aren’t even among those four, making for a relatively underwhelming initial listen. Brevity doesn’t necessarily have to be an issue when it comes to genuine artistry. However, LIKE A STAR isn’t pioneering enough to use this excuse. Would it really have been so hard to include an extra one or two songs?

LIKE A STAR is Rainie playing dress up, trying on different styles and imagery that she would usually steer away from, and the result is an enjoyable slice of contemporary pop, if nothing particularly groundbreaking. Moreover the record is a signal that despite having career longevity that few artists can realise, Rainie is not willing to rest on her past success, and still has a fire for creativity and artistry.

Time will tell what LIKE A STAR represents in the context of Rainie’s career. Will it be regarded as a transitional record, away from her hipster-adjacent tendencies of sonic adventure and literary lyricism; towards a more mature and confident artist that no longer needs to demonstrably prove her artistic credentials? Or will it simply be a standalone project? Either way, this question doesn’t take away from the enjoyment that the listener gets from the record.

For twenty years, Rainie’s music has accompanied a generation of music lovers who have grown up alongside her, and seen themselves represented in her music. Her artistic curiosity and drive to be recognized as a serious performer mimics our experience of growing up and wanting to be taken seriously by the world. However, there comes a time when we ultimately accept and own who we are, and LIKE A STAR is perhaps that moment for Rainie. From the fresh-faced teenager to the maturity she represents today, Rainie is not like a star, she is a star, and this record shows that she will undoubtedly shine brightly for many years to come.