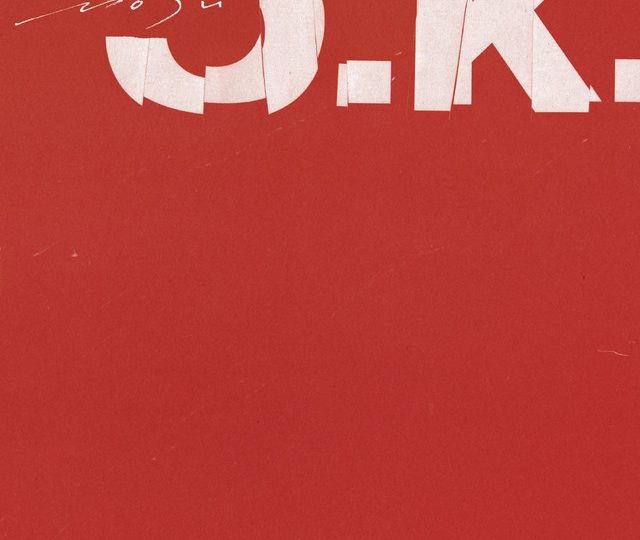 Filipino-Wiradjuri singer-songwriter Mo’Ju has never shied away from being daring in their creative exploits, but coming off the back-end of another year full of lockdowns (especially in Melbourne, Australia), their latest album O.K. is a hard-hitter in the gentlest of ways.

More than ever, 2021 has been a time to talk about how change affects us as humans not only physically, but also mentally. Inspired by periods of personal challenge that left them feeling burnt out, exhausted and struggling mentally, O.K. is an alternative take on how Mo’Ju presents vulnerability in their art, and a raw, honest representation of anxiety and depression in musical form.

The first song on the record, “Okay” starts off with pensive keys against rickety percussion to situate us in a No Man’s Land filled with groovy dissonance. A melancholic mix between a persistent bassline and experimental electronic ambience, I like to think the thrum of the bass as the fast pace of daily life, with the electronic elements representing echoes of doubt, anxiety and depression that cloud ones’ clarity at unexpected moments. There seems to be an intentional creation of discomfort in this song as Mo’Ju starts the conversation at the intersection between openness and a willingness to heal, with the help of beautifully conversational and vulnerable lyrics. As the words “I’m not okay/Is that okay to say?” are uttered, over and over throughout the song it seems to get more and more powerful with each repetition at the hands of the talented artist. There is this feeling of exploration, of pushing deeper and deeper through the self-doubt, of continuing to stay open to the process that transforms these words from ones wracked with self-doubt to a mantra that gets you through the day.

As the album goes on, it continues to emulate Mo’Ju’s state of mind in tight spots. “Into These Feelings” lays down rigid marching-band rhythms alongside hollow timpani echoes, creating a dissonant texture that feels like ones’ headspace when ‘starting the day at the end of ones’ tether’, as perfectly put in the lyrics. Mo’Ju’s voice rings out clear and unwavering as they recount the struggle of the daily grind. I also love the abrupt intrusion of these moments of softness and gentleness introduced by romantic guitars where they remind themselves “not to give in to these feelings”. At some point both these disparate sounds meld and seem to find a rhythm in sync, evolving into an abstract galactic soundscape, bringing us out of our own minds and reminding us of the beauty that can be found outside of ourselves.

The romantic, meandering guitar vibes make a return on ‘Pissing in the Wind’, where Mo’Ju’s simple, dreamy delivery is made richer by vivid imagery and an elaborate metaphor likening ones’ heart to a helium balloon. “Still your heart remains buoyant as a helium balloon/It only takes one prick to make it burst” The lyrics are a true masterpiece on this two-minute ditty, told in a narrative-like manner, each line of poetry falling naturally in step behind the last. Adding on some larrikin whistling and echoey ambience, it’s a song I imagine Huckleberry Finn singing on a moonlit night.

The first single off the album “Wave” comes up next, marking a distinct shift towards more beats and synth-based sound combined with an EDM-style structure. Continuing to use off-centre beats to make a statement, the production here is much mellower, allowing Mo’Ju ample space to let their vocals do the talking. Rich and raw in their delivery, I love the unpolished quality of those long high notes as they sing: “dippin’ in and out of this wave”, allowing the melody to ebb and flow alongside the lyrics. While the song is a metaphor for how anxiety and depression comes and goes, the song has a rather meditative and hopeful quality for me. Perhaps it is that consciousness of how anxiety functions which has been embedded into the lyrics, marking a shift in control over navigating ones’ mental health at this stage in the journey.

“In Another Life” continues the oceanic, meditative vibes found in ‘Wave”, expanding on it to amplify the highs and lows as the singer finds themselves at their rawest on the record, singing about that feeling of sinking and fading away under the weight of ‘what ifs’ and doubt. If “Wave” had us cresting on the edge of every wave, “In Another Life” sees us submerged underwater in melancholic slo-mo.

“Sometime” shows Mo’Ju reflecting on what’s next as they begin an upwards swing towards recovery. The bass has returned, this time with a renewed energy that works with the forward momentum of the melody rather than against it. In the varied use of the word “Sometime” we see an intention to get better; yet also a firm inclination towards letting ones’ mind take the time it needs to heal. “I’d be lying if I said that I was fine/I’ll be letting go sometime” There is a sense of hopefulness in this song that is so precious; like little sparkles that catch your eye before fading into the background; letting one know that maybe there is an end in sight after all.

“Not Forever” shows Mo’Ju on the last leg of their journey with the most upbeat song on the record. The message is loud and clear, an empowering mantra that reminds us of the only thing we need to know in dark times: “But it won’t feel like this/Not forever”. Coalescing many of the textures that we heard on the record such as the synths, keys and snappy percussion, here more live band instruments are added to liven things up, ending the album on a powerful runners’ high that reminds us of our innate capacity to feel despite all the pain and trauma; perhaps even more deeply than before.

The conversation around mental health is one that is not easy, but necessary. And while it is a conversation Mo’Ju is spearheading with O.K’, the album is but an olive branch to invite us all to identify the complex feelings these songs emulate, and play a more active role in our own journeys towards healing.

What is so brilliant about the album is that in addressing mental health in the most authentic way for Mo’Ju, O.K. resonates even more deeply with listeners. For there is nothing more universal than not being able to get out of bed on a Monday, of feeling like you’re not enough on a Wednesday, and struggling to ask for help on a Friday…or any day of the week for that matter.

As someone who’s felt that now-familiar sensation of a certain vein of discomfort; the kind that lets you know you’re on the path to healing, that feeling comes back in full force while listening to this album. Yet when it feels like someone knows exactly what you’re going through like Mo’Ju is on this record, somehow it becomes an easier pill to swallow. With seven songs that each identify a different stage in the most challenging of times, Mo’Ju has done an admirable job of putting out music that heals. After listening, why do I feel like I should be paying them for therapy sessions?