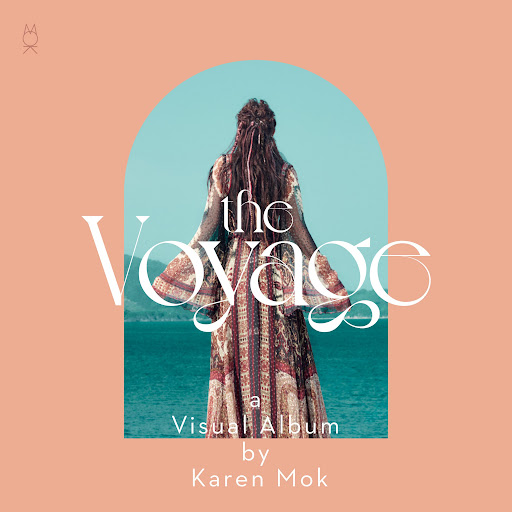 Few artists have had as illustrious a career as Hong Kong’s iconic Karen Mok 莫文蔚. Across a hugely successful 28-year period she has conquered the worlds of music and film and has been a pioneer for Asian women in the realms of musical theatre and the music industry at large. What people may forget though is that of her 18 studio records, only three of them are sung in Cantonese, and the last one was released all the way back in 2001.

That’s why it’s surprising to many that latest release The Voyage, follow-up to 2018’s serviceable but not spectacular HALF TIME 我們在中場相遇, is sung entirely in Cantonese. Not content with surprising everyone with the fourth Cantopop record of her career, there’s also two other particularly unique aspects to the record.

The first one is that The Voyage is a visual album – meaning that Karen has prepared a series of music videos and even a documentary to accompany the listener on their audio journey of the record. She allows us to experience her music in an innovative way through absorbing the imagery and descriptions she feels best brings out the core of the music. The second is that The Voyage is not just comprised of new recordings, but also re-interpretations of previous works – which gives us the opportunity to hear how a more mature Karen re-interprets songs from her past and brings them into the present day.

Kicking off the record with a shot of adrenaline is “A Woman for All Seasons 婦女新知 2021“. An evolution of the track of the same name which appeared on her 2000 self-titled EP, while the original was a mission statement of the modern woman then, this updated version imagines where those women are now. Still shopaholics, but now they value things other than expensive products. They have more wisdom on life, are better cooks, and overall have become well-rounded individuals. Karen sings with such an effervescence and confidence that it’s impossible not to feel the joy in every second of this song.

Next up is “To Shed a Tear for You 因一個人而流出一滴淚”, a brand new song dealing with the existential question of being remembered or forgotten. This song has a particular significance as Karen has been absent from the Cantopop scene for so long, she muses on this track whether her fans may have moved on (which is of course impossible). A beautiful song with an earnest delivery, the track is a sing-a-long anthem with an unexpected key change being the cherry on top.

A standout on the record is an alternative recording of “Breathing is Hazardous 呼吸有害”, which took Hong Kong by storm last year.  With the title an ominous reference to the Covid-19 pandemic, the song lyrically deals with how the body reacts after having its supply of love cut off. Karen manages to improve on the original by changing the musical dynamic; with the song evolving from soft piano into a cascade of heavy guitars, enhancing the intensity of the lyrics and adding to the emotional delivery of Karen’s vocals.

The album is rounded out with closer “So… Anything is Possible原來…甚麼都有可能”. The track has an intrinsic link to “So… Nothing is Possible原來…沒可能” from her 1993 debut. Feeling an overwhelming pressure to succeed at the start of her career, it’s no surprise that a new female artist felt overwhelmed and unable to succeed. As Karen ultimately proved however, it was possible after all. Equal parts dramatic and climatic, the song complements her natural vocal timbre, whilst also giving her the space to climb up to some truly impressive high notes. Indeed, the technical ability Karen displays on the song is a feat that few others could show three decades into a career. The track is built in two distinct parts of completely different melodies, yet it doesn’t feel disjointed, with both sections merging seamlessly together. The call-and-response vocal construction employed at points throughout the number is also particularly special, and a trope not commonly heard in pop music.

These innovative re-interpretations sit alongside more traditional tracks which make for enjoyable listens. It’s hard to believe that anyone could resist the jazzy charms of “The Way You Make Me Feel” from 1999 film The King of Comedy喜劇之王, or emotive power ballad “Aurora Borealis北極光” a Cantonese rendition of one of Karen’s signature Mandopop hits “The Fruits of Summer盛夏的果實”. That being said, it seems somewhat of a wasted opportunity to scatter simple re-recordings of previous tracks on Karen’s first Cantopop record in two decades. Whilst The Voyage might be a journey, this kind of recording may have better been reserved for a greatest hits collection.

New music from Karen is always a pleasure, and The Voyage is certainly a welcome addition to her varied discography. The record’s zestful atmosphere makes it a perfect accompaniment to these hazy days of summer, while new songs and interesting re-interpretations give the record re-playability. The brevity of the record as well as the simplicity of some re-recordings however detract from the overall experience, and this somewhat laissez-faire approach to the project makes it seem that this re-venture into Cantopop is not one that will happen again anytime soon; despite the gorgeous visuals and videos that have been carefully curated to complement the record. That being said, overall The Voyage is a welcome return to Cantopop for the Hong Kong icon, and it leaves us hoping that we don’t have to wait another two decades for a follow up.