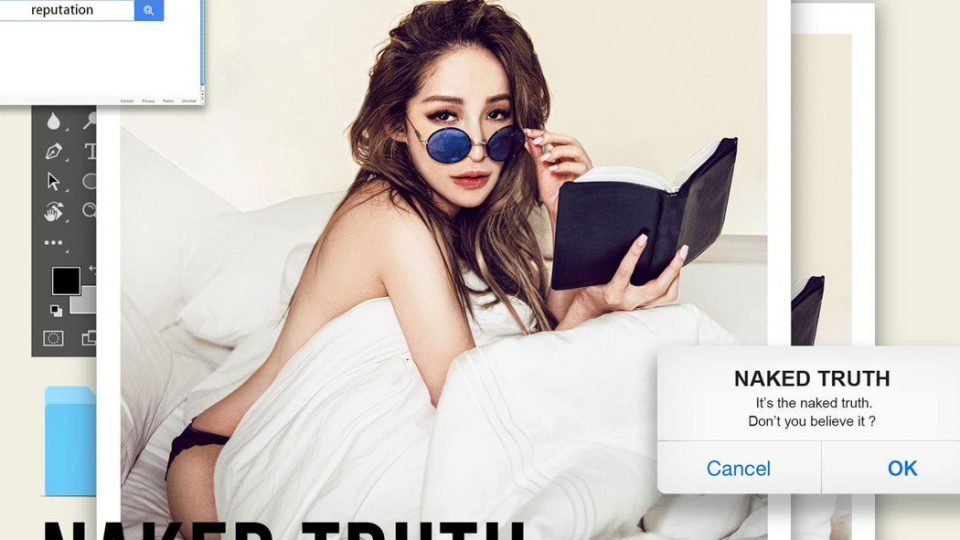 The 2010’s were not particularly kind to Mandopop superstar Elva Hsiao 蕭亞軒. It started strong, with a series of on-trend electro-pop records which showed Elva at her bulletproof best. However, complaints of becoming increasingly derivative, followed by 2014’s commercial car crash Shut Up & Kiss Me 不解釋親吻 (which was far below the quality of records put out by her contemporaries) caused her to hit the emergency brake on her career. A series of personal issues only solidified this, and it seemed that Elva might simply become a remnant of a past era of music.

With this is mind, it may not be surprising that Elva took her time on 15th record Naked Truth 赤裸真相, a full six years since her last outing. Starting work on the album in 2017, Elva was perhaps inspired by her unexpected personal and professional misfortunes, using music as therapy to manage the imperfections in her life. Indeed, the idea behind Naked Truth is to bare to the world the real Elva, even though it may not be easy to swallow. The result is a collection of songs, although sonically quite separate, tied together by their relevance to Elva’s lived experience, making the record a much more mature and indeed personal affair than arguably any of her prior recordings.

Opening track “Lonely 911” is an immersive electro-pop track which suitably sets the scene for the rest of the record. Despite its dancey façade, the track dishes up an attack on the hypocritical nature of internet culture, and the lack of meaning that online relationships have. Elva sings about the loneliness that comes from a lack of in-person interaction and complains of being unable to distinguish between reality and illusion, until the chorus crashes in as if it really is an emergency situation.

The album continues to build momentum with “Celebrate Everyday 不如先慶祝能在一起”, a luxurious mid-tempo rich in depth and texture. As Elva sings about putting into practice celebrating living in the present, she is engrossed by a luscious electronic backdrop which offers up new intricacies upon repeated listens. As the song feels ready to explode to new heights, the listener is greeted with an all-absorbing extended outro, adding to the tracks overall ingenuity.

Perhaps the highlight of the record is the track which the album is named after. Straight out of Kylie Minogue’s playbook, “Naked Truth 赤裸真相” is a heavenly slice of 70s inspired disco-pop designed to fill a dance floor, and feels like the Elva we know and love. The one uptempo on the album which doesn’t seem to be chasing any particular trend gives the song a timeless feeling, as Elva sings about sudden attraction and the fun that it entails.

The album’s slower moments are also diverse, and are high in quality. “Driving Away 你不是蝴蝶” is an inspiring mid-tempo ballad which inspires the listener to spread their wings and break free from whatever confines them. “My Little Soldier” meanwhile is somewhat of an artistic triumph; a sonic journey from darkness into the light, and a stunning way to close off the album. No doubt inspired by her own personal struggles, the opening minutes of the track are dark and brooding and filled with self doubt, but as the track builds it is clear that through being motivated by her unwillingness to accept defeat, she comes out stronger on the other side. Closing line Keep being honest  / Just go on bravely like this / Dear, just like this, keep being brave is a powerful sentiment, and one we all need to hear in our darkest moments.

Despite the praise, Naked Truth is far from peak Elva. The problem with taking three years to prepare a record means that certain trends that may have at one point been exciting end up sounding somewhat stale, which is the case on several tracks here. “So Good 大師講”, despite Elva sounding full of swagger, feels limited by a trap-inspired background that feels overdone in 2021. Likewise, “Blame It on Me 不是東西” despite having brooding verses seemingly building to an impactful chorus, is let down by a tropical-pop breakdown – a trend which was hasn’t been relevant since 2016.

The track listing also feels a little disjointed, with all the mid-tempo’s and ballads pushed towards the end. By switching the order around, it would give some breathing room for fans to really appreciate the quality of the uptempos, whilst also giving the ballads a greater chance to shine. Both these things however are not dealbreakers, and the quality across the record is still high. Even at its most derivative moments, Naked Truth is not bad, remaining enjoyable and listenable from start to finish.

It’s difficult to describe how good it is to not only hear a new Elva record in 2021, but for it to be good. Naked Truth carries the burden of not only proving to the world that Elva can still make good music, but that she still has a place in the contemporary Mandopop landscape. Thankfully, it unequivocally succeeds on both these fronts. Naked Truth is an eclectic and mature record which is effortlessly re-playable, and Elva sounds more confident and comfortable than ever before, a feat given the vulnerable nature of the lyrics on the record. Naked Truth is an imperfect record, and it would be wrong to say it ranks among her best works. That said, it is a strong foundation from which Elva can build and cement her rightful place as an elder-stateswoman of modern pop music, alongside artists like Jolin Tsai 蔡依林 and A-Mei 張惠妹.

Hsiao has always felt like an important piece in the jigsaw of contemporary female Mandopop, and since her absence from the scene, it felt like somehow, something missing. Finally, that piece is back, and the puzzle feels complete once more. Welcome back Elva, we missed you.