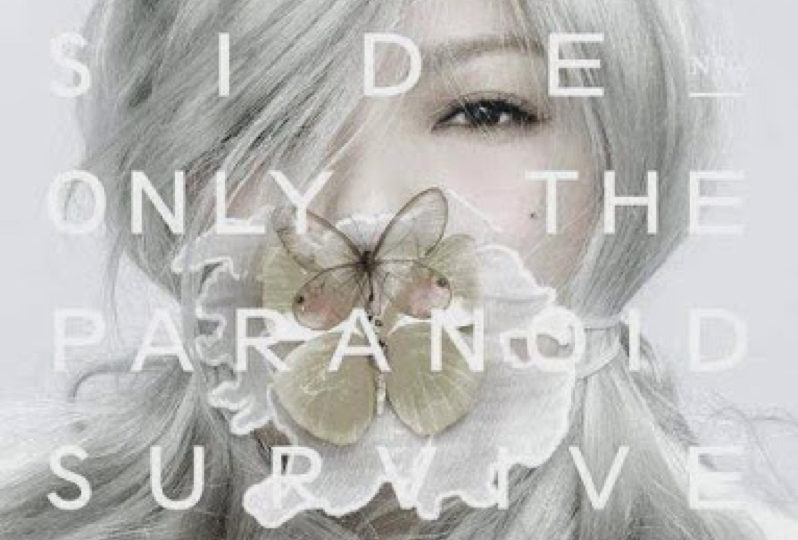 A-mei’s latest album <Faces of Paranoia> is a well-tuned comeback for the Mandopop queen, who at this point had been on hiatus for about three years. But like I always say, quality is better than quantity always, and Amei’s perfectionist side to her definitely saw this album through, making it one of the best, thought-provoking albums of 2014 for me. Her concept is impressive; set against a backdrop of white to represent purity, clarity and logic; A-Mei takes us on a journey with her, revealing slowly the grey that lies behind the facade of white, staining it with the aftermath of fear, paranoia and anxiety that is present in every one of our psyches. Genre-wise, Amei toys with the genres of Brit-rock hinting at electronic elements, before going full speed ahead in her second half of the album with a EDM-inspired take. To me this transition of genres in the album also reflect on the White to grey analogy I made previously; from the clean, simple lines of Brit rock to the heavy, grungy, dirty sounds of EDM, Amei has certainly made her point not only through the concept, but also through the arrangement of her songs.Her first song <All right and All wrong> sets the album off to a great start. Collaborating with singer-songwriter Xiao Yu, A-Mei borrows a little of his R n B, creating a wide open atmosphere with simple piano tinklings and EDM beats laced regularly throughout the song. An optimistic song that feels like a ray of warm sunshine, the lyrics revolve around the concept of all of us being right but also wrong, and not being able to own up to our mistakes. The last line of the song ends by saying “because we walk towards happiness  time slows down”, telling listeners that we are all humans and imperfect, yet we are all fighting together for happiness. To me it’s kind of a nice way to start off an album with such a heavy concept; letting listeners know that although what Amei has to say may not be what they want to hear about themselves, as humans we all share the same imperfections and that’s just fine with her.

Her second track, <Will you still love me like this> is stunning in its simplicity; basically founded on nothing but a piano Brit-rock inspired arrangement with a little cello and synth-keyboard liltings over the top, they build a strong foundation for Amei’s voice to steal the show. Starting off with a clear, sweet voice, she transitions into a timbre flecked with flecks of imperfections, fragmenting in places while rough and muted in a way that makes it even more beautiful. Even through her vocals Amei finds a way to introduce the concept of purity, juxtaposing it against flaws. As the song title explains, Amei lays all her flaws bare as many of us do, and asks if YOU-not as a lover, a friend, but just as a listener-will still love her the way she is, bloodied, scarred and human. Furthermore she also discusses the inherent need of every human to be loved despite these flaws. The more she sings, the more raw and emotional the song reveals itself to be; as if it is merely a conversation between two people, adding layers of electric guitar and vocals before Amei lets loose with roar, dissipating the suspense which was built up over the course of the entire song.

The only real ballad in the album (which is always a sign of a good album in the making), <March> blended in smoothly with the theme of the previous song, following the Brit-rock genre. The lyrics toy with the processes of time and love in a beautifully self-reflective manner that works perfectly with the Brit-rock genre. A Classic Brit-rock ballad through and through which would not look out of place among the likes of Coldplay and other western artists, with Amei’s voice on point as usual.

Following it is yet another piano-inspired arrangement with a Brit-rock theme in her fourth track <Autosadism> but this time the atmosphere is completely different. Once again emphasising on the cleanness of the piano and Amei’s voice, the arrangement incorporates only the piano and Amei’s voice, both working together to fluidly fill all the cracks the other leaves in a seamless combination. For those of you who don’t know what Autosadism is, it’s basically a tendency to inflict pain on oneself and actually feeling pleasure from such pain. Amei presents this theme in a tasteful way within this song, detaching herself from the story by incorporating the passiveness of Brit-rock, but once again using the versatility and deliciously dirty texture her voice takes on, she sings about taking pleasure in the darkness of love. I especially love the metaphor of allowing oneself to be bitten by a poisonous snake, and rejecting the white dove; in other words forgoing peace and purity for poison and darkness, a kind of pain we often knowingly inflict onto ourselves, feeling a kind of rush from it. There’s just so many things in this song to listen out for, making it one of the most delectable and interesting treats in Amei’s album.

After a full five songs of brit-rock, Amei makes a smooth transition into the Hip hop/EDM part of her album with a track written especially for her by golden melody award winning rapper Softlipa, which is also the title track for her album <Faces of Paranoia>. What I like about this song is the interesting sense of rhythm it has; first starting with a relaxed rhythm and minimal arrangement before adding layers of heavy, grinding beats in the pre-chorus, slow and buoyant to build suspense before changing tempo and frequency in the chorus. Like the arrangement, the melody in itself starts off even with a hint of playfulness and a positive energy, before switching into a minor key in the chorus. The melody, lyrics and arrangement work well together to reflect this idea of faces of paranoia; a mental disease that cuts into your thoughts on its own whim and fancy, unexpected and unwanted. As a listener, I feel that Amei’s tried to replicate the emotions of paranoia setting in in this song, starting out with calm and normality, before descending into a kind of darkness fraught with anxiety that we all know too well. By changing up the song structure by putting in the rap right at the end, Softlipa and Amei create a new listening experience altogether, and is truly the most aesthetic representation of paranoia I’ve ever heard.

Next up, Amei collaborates with Softlipa’s label mate and fellow rapper Miss Ko on her seventh track <Jump in>. Although the song was written by Miss Ko, and is definitely done in the taste of Miss Ko, Amei truly sings this song to perfection, melding Miss Ko’s authentic relaxed sound with her own versatile and seductive voice. As usual Miss Ko’s lyrics and melody are simple and easy to follow, asking the crowd to jump in and dance, but the beauty of this song lies in the sense of suspense that is held throughout the song. Amei’s subdued singing style keeps listeners coming back for more in a song that is simple in its methods but large on perfection.  The next song <Booty Call> is tantalising in its seductiveness too!

Her eighth track <Dog> tells the story of a lover having an affair, tying it in to the story of them agreeing to buy a dog together and then cleverly making a reference to the third person as a female dog. One of the most overtly taboo topics in this album, Amei depicts the scene word for word in vibrant imagery, kind of to the point where you’re getting uncomfortable from listening, but if you don’t have anything to hide, why should you be feeling uncomfortable?

Ninth track <Fly High High> is one of my favourites just because of its infectious happiness. Definitely the most upbeat and EDM infused track on the album, Amei’s voice transforms once again into a sweet, light sound that brings sunshine into the track. To me it also has a little bit of a Hawaiian/Jamaican influence which probably has something to do with the happy guitar pluckings and an upbeat rhythm. After the large dose of heavy content in the album, this light, bubbly song comforts the soul as Amei sings conversational lyrics that soothe and relax listeners. One of my favourites on the album too.

The last song <Moving forwards towards Utopia> is kind of the only song that I felt was very standard in its arrangement and in its melody, as if I had heard it before elsewhere, and reminisced of her <Faces of Paranoia> track. Nevertheless, can’t say that it wasn’t well done, and it did have this strong forward direction, and a futuristic atmosphere, as if the album should end on “to be continued” rather than a real conclusion. As we now know, Amei is currently holding a concert of the same name, so she definitely made her point with this track.

Overall one of the best albums I have heard in a long time. Amei’s <Faces of Paranoia> album has truly opened my eyes to new dimensions of the human condition, teaching me that all humans are flawed, imperfect beings. But yet, we all crave, AND DESERVE love, belonging and happiness at the end of it all. Nothing is ever as black or white as it seems, creating a poignant snapshot of today’s society that can be understood by anyone willing to listen.