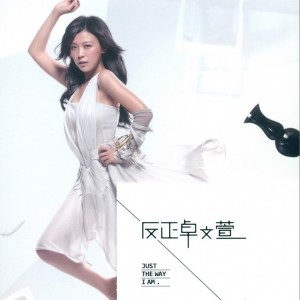 This album is one of the best that I have listened to this year; I recommend it to both GENIE ZHUO 卓文萱 fans, but also any music lovers who are looking to try something different or new. As a follower of her previous works, I am pleased to say that her strong vocals have finally been put to good use in the making of this album!  This album follows a more electronic approach, combined with elements of rock which is very consistent throughout all the tracks.The first single to be released, <反派 Villian>, although it is a cover of a English song, <I Don’t Wanna Be Your Girlfriend>, the lyrics and a whole new arrangement gives it a new lease on life (metaphorically speaking, of course.) It shows a whole new image of Genie, musically-wise and demonstrates to the world its point  loud and clear – she wants to be heard loud and clear: she wants a change. <想飛的自由落體 The Free Fall That Wants To Fly> is a favourite of mine, because it expresses both Genie, and the inherent need of each and every one of us to be able to be ourself. And it just gets better from here. Genie pens heartfelt lyrics in track 5, <够了 Enough>, and takes a step which many other artists have failed to take after years in the music business; She takes a stab at society in < 針 Needle>, where she expresses confusion at society’s inability to tell the truth as it is; instead honey-coating it and twisting it, only to causing yet more confusion and misunderstanding in today’s society, using  a style of music very much similar to Lily Allen, the queen of straightforwardness.  How apt.  She also addresses problems relating to the human condition in <恐慌症 Panic Disorder> a reflective and raw track in which Genie expresses emotion accurately in order to ask questions about the meaning and purpose of our lives. <哇哇叫 Shouting> is a punk rock number embracing the foundations that Rock music was initially built on: kicking up a fuss and doing it without a care in the world. This album is timeless, and deserves a listen, or maybe even two, or three, or four…