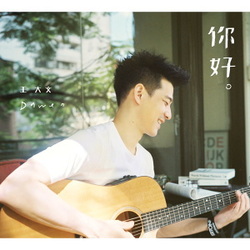 Wang Dawen王大文 is probably one of the most promising new artists that I have seen over the years, and certainly is one of the more polished. Many people don’t know this, but during his time in America, he was quite an accomplished singer-songwriter, even winning an independent music award for his work on racism and garnering critical acclaim for his creativity. Thus we should be very proud to be the demographic within which Dawen has decided to share his music with; his first English album which does address racial and other social issues is on his YouTube page if you want to check it out! Anyway, most of his fans know him from his creative Chinese covers of English songs, another way in which Dawen bridges the gap between Western and eastern cultures. In his debut Chinese album “你好 Hello”, he takes a lighter approach on things by simply using his music to introduce himself to listeners. Although his concept is simple and similar to the aim of many other debut singers trying to catch the attention of the mainstream music listeners, I still feel that Dawen’s done well to really outline his own signature style to listeners through every aspect of his music: the melodies, the lyrics, and the arrangement, thoroughly infusing his music with his spirit and ideas. I’m really proud of what he has achieved within this album, and I truly believe that he put his heart and his soul into performing and creating each song. Through his music, I feel his enthusiasm and passion which he so graciously shares throughout the album.The great jazz composer Jelly Roll Morton’s secret recipe to success was to “always give melody with plenty of rhythm“, and it is definitely Dawen’s sense of rhythm that makes him so unique. He’s like a human beatbox, mixing and matching different rhythm lines be it on the synthesiser, drums or guitar. If you see him perform, he is always moving his head, his arms, his feet in time to the rhythm.

Majority of Dawen’s songs showcase in some form or another his unique blending of rhythms, and <慢半拍 Slow By Half A Beat> is certainly one of them. I love how he incorporates syncopation into the melody, while using the lyrics to introduce himself as a person who believes that slow and steady always wins the race. He introduces himself so clearly and cleverly through the arrangement and the lyrics, it’s really hard not to love this song. Using his blend of acapella, synthesiser and guitar he creates a refreshing fusion of sounds that I’ve now come to associate with Dawen’s works. As an artist who generally associates himself with RnB music, I feel that Dawen’s already found his unique brand of music that can be identified as rhythm and blues, but at the same time is wholly original.

His second track <你好 Hello> builds on his unique melody lines with use of acapella and a simple bass and snare arrangement. The atmosphere within this song is so different from anything I’ve ever heard; it’s a different kind of happiness that Dawen brings to listeners – a bubbly sense of enthusiasm that is so rarely found in real life but yet was captured perfectly by Dawen in this song. Once again, I feel that this is another song that uses it’s atmosphere very well to capture a side to Dawen’s personality. An immensely likeable piece.

The next piece, Dawen’s duet with KIMBERLEY CHEN 陳芳語 <練習愛情 Practising At Love> starts off with a promising crispness and happiness that Dawen’s music always brings, and works well with Dawen’s warm vocals. All is well until Kimberley’s part comes in – her voice changes the atmosphere of the song totally; and pretty much puts a damper on the whole rhythm section of the song altogether. With the cleanness of the piano gone, her husky vocals pretty much wipe out all notable arrangement within the song. Even when harmonizing with Dawen, she overpowers him and her powerhouse vocals in the bridge eliminate the little atmosphere left within the song. Even in the next phrase where Dawen cleverly syncopates the rhythm, Kimberley’s voice sounds out of place and half a beat behind. The original demo that Dawen wrote was sung by him and RACHEL LIANG 梁文音, and I strongly feel that she would be a much better duet partner in this song than Kimberley. Her resonant and light vocals would have allowed the rhythm of the song to come through, and would have been a much better match for Dawen’s voice too. A great song, but I really feel that Kimberley’s voice detracted too much from it for many elements to be heard.

The next track, <鞭炮 Firecracker> is an instantly relatable song that is injected with a large dose of Dawen’s own concoction of happy juice created from a cool mix of acapella, various percussion instruments and snazzy guitar riffs that keep the beat going. This is another song where you can see a great beat emerging from all the different directions of the voices and instruments. However, I felt the mixing could have done better to bring out the guitar part in the last chorus where Dawen otherwise did well to create a cacophony of different voices and beats.  He also could have played on the dynamics a little more for the acapella parts “ooo-pop” to create a bigger effect, but otherwise I was still really impressed with the song. Dawen brings out a different atmosphere of happiness in this song – one of harmony, warmth and unity. Although he doesn’t explicitly use any sounds of firecrackers or Chinese traditional elements within this song, the way he uses the lyrics to create a Chinese New Year-Esque feeling within the song is almost magical.

<有什麼意義 What Meaning Is There> has a wonderful melody and great lyrics. Dawen keeps the arrangement simple with synthesiser beats, a simple melodic phrase on the piano keeping it all together and some acapella harmonies, creating a great RnB styled piece. Simply done as it may be, Dawen shouldn’t shirk from using more acapella harmonies to fill out the piece, creating a more dynamic sound. Likewise, <回心轉意 A Change Of Heart> is another RnB-styled piece with an immensely likeable melody and simple but touching lyrics.

< 酸雨 Acid Rain> is one of the more serious pieces on Dawen’s album, and Dawen has personally professed it to be one of his favourite songs on the album. I’m loving the stripped down atmosphere of the song with the simple guitar riffs. I feel the lyrics really add to the song’s meaning; bitter and corrosive, just like acid rain.

Dawen’s <美麗 Beautiful> is another one of the masterpieces within this album. Somehow he manages to integrate the concept of simple, pure beauty perfectly into not only the lyrics, but also the melody and the classic arrangement style. In this song I hear such wholehearted sincerity and am also able to see a fluid image of beauty which Dawen constructs within the song for listeners. Truly a beautiful song.

As for <印度小夜曲 An Indian Lullaby>, I was confused to instead hear a song that consisted of Chinese traditional influences in both the melody and arrangement rather than Indian . <Shoes> was a seductive Jazz number that reflected precisely the playfulness, humor and seductiveness of the lyrics; also a cute reflection on the Asian habit of taking off their shoes before going into houses.

There’s only one flaw that I can generally find in this album; and that is that Dawen’s use of dynamics mostly vocally isn’t quite there yet. Especially with his use of vocal acapella within his album, I’m impressed with his creativity but really hope that he can use not only the harmonies that they create, but also their dynamic qualities to add to the atmosphere of each song.

Overall, I am really impressed with this album. So proud of everything that Dawen has achieved this far, and despite a few flaws, the quality of his performance within this album far surpasses that of many new singers before him. His is a simple concept represented to near perfection; who knew that a “你好 Hello” from Dawen could tell you so much about him? One of the best albums I’ve heard in a while, well done Dawen!