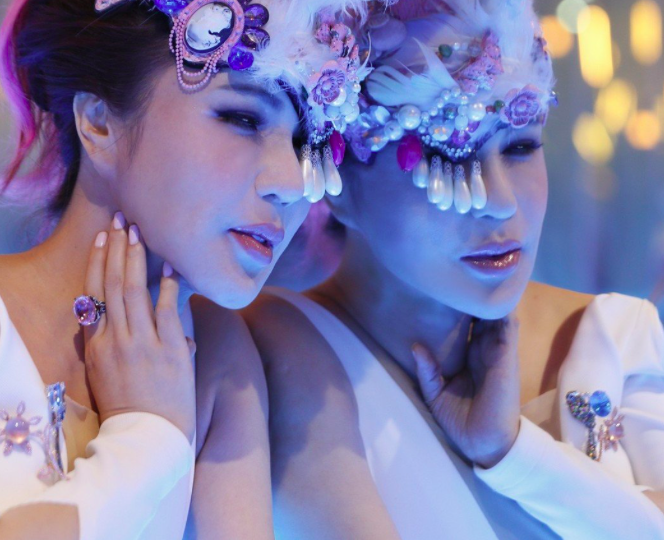 After a two year gap since her debut album topped the charts for an entire month, celebrity and legend of Taiwanese television Regine利菁 is back for another assault on the charts with her self-titled EP.

The three tracks follow closely in the footsteps of her 2015 debut Happiness of Happiness 快樂的快樂的快樂, and the EP is a confident collection of eurodance inspired high energy pop music. EP opener Look At Me 看我看我 is a hypnotic dance track with an addictive chorus coupled with  an intensive dance routine aimed at hypnotizing the viewer. Since premiering on youtube, the official video has had over 100,000 views.

The second single from the EP Misty迷霧 highlights that everyone in life is walking with an unclear future ahead of them, and that sometimes, we may trip and fall, however with luck the haze will clear and we can find our way forward, and the song gives the listener an opportunity to experience her irresistible husky lower octave during the verses.

The instant success of the EP has come at a cost –  it apparently cost over NTD ten million (USD$314,000) to make. Regine travelled to record the EP in Seoul on three separate occasions, prepared exquisite designer clothes for the visuals, and worked with seasoned MV directors and choreographers.

Nevertheless, it seems her investment is paying off. The pre-order of the EP sold out within minutes, and upon official release stormed to the top of the charts.

The 55 year old entertainer is a pioneer in Taiwan. In 2004, it was discovered that several years earlier she had undergone gender reconstruction surgery. Rather try to brush the rumors under the carpet, Regine came out publicly, and as a result her popularity soared. Nowadays, she is seen as Taiwan’s most successful transgender entertainer, and an icon in the LGBT community.
​
Despite her success and crossover appeal, she said that for now, she doesn’t want to expand outside of Taiwan. In an interview with China Times 中國時報, Regine said that she feels that in recent times, many of the big singers able to put on a spectacle have began focusing their attention too much on China, leaving a dearth of this kind of performance and artist in Taiwan. As a result, she feels that she can give the audience something that is currently in short supply.

Check out Regine: The EP 利菁同名EP ​on Spotify now: