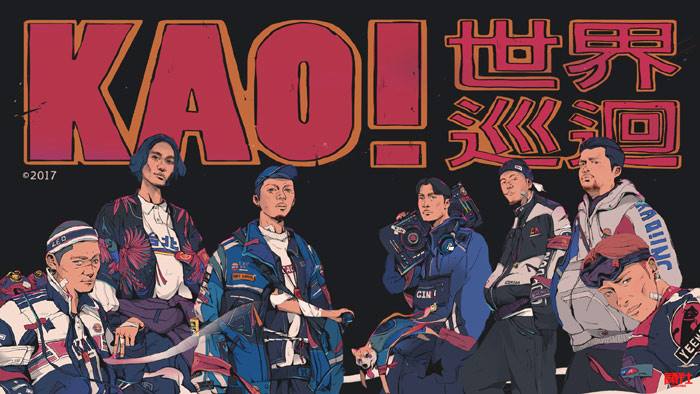 As the world is slowly getting more of a taste for Taiwanese music, what better time than now for a wave of the Taiwanese indie scene’s best to enter the North American market?

A big player in the Taiwanese indie hip hop scene is none other than legendary Hip Hop label KAO! Inc. founded by Dela Chang. The label has produced for some of the hip hop scene’s best and most critically acclaimed artists, such as Miss Ko, Soft Lipa, and DJ Didilong, who have all been highly appraised and nominated multiple times at the prestigious Golden Melody Awards for their efforts.

Now, the entire label which currently consists of Soft Lipa, GorDoN, DJ Didilong and Leo Wang are bringing their offerings from Coast to Coast-such is the name of their tour as they tour LA and NYC, holding shows on the 19th (LA) at the Echoplex and on the 22nd (NYC) at the Highline Ballroom.

The crew will not only be performing some of their cult favourites, such as SoftLipa’s ‘About Little Bear‘ and DJ Didilong’s ‘Didilong of Taipei‘, but also previewing some new yet-to-be released tracks for Western audiences. Get tickets for the NYC show here.

Still not convinced to catch the show? Check out the profiles of the five artists below…

蛋堡 Soft Lipa
Hailing from Tainan in the countryside of Taiwan, Soft Lipa is one of the pioneers of the newer generation of rap and hip hop in Taiwan. Influenced from young by fellow Taiwanese rapper MC Hotdog, Soft Lipa was inspired to begin composing his own music, transcending into a chill, low-fi rap style which he describes as ‘Soft Hip Hop’. He has won and been nominated at several Golden Melody Awards, with his most critically acclaimed album being his 2013 work ‘Secret of His: Renovate’, and has worked with some of Taiwan’s best mainstream and underground acts, including Mandopop diva A-mei Zhang, for whom he wrote ‘Faces of Paranoia’ in 2014.

國蛋 GorDoN
Gordon, also known as Dr. Paper is another emerging rap figure who hails from Tainan. Influenced greatly by Eminem and West Coast rapper Nas, he joined the Bamboo Gang when he was still in senior high, and released “The Mixtape” with The Huangs in 2006. Joining KAO!INC. a year later, he has continued to churn out mixtape releases, releasing his fifth mixtape ‘Sunday Night Slow Jams’ last year while successfully embarking on a 12-city tour around China.

李英宏 Yinghung aka DJ Didilong
A cult favourite of the Taiwanese youth at the moment, Yinghung aka DJ Didilong is one of the newest members of the KAO!INC. crew, but by no means loses out in terms of talent. Unique in that he chooses to perform exclusively in the Taiwanese dialect (Minnanyu), DJ Didilong’s name is a phonetic translation of 「直直撞Di Di Long」from Taiwanese which means to barrel forward. His music is a far cry from the selection of Taiwanese oldies and ballads that are often more conservative and dated in nature; instead he decides to incorporate modern elements of funk, hip hop and more into his music and is a talented vocalist and rapper who is known for his rapid spitfire rapping style. His first album ‘Taipei Didilong’ which was released in 2016 got him nominated for ‘Best Taiwanese Male Vocalist’ and ‘Best Taiwanese Album’, setting the scene for his future within the industry.

Leo王 Leo Wang
Another member of the new generation of hip hop artists in Taiwan, Leo Wang is a rapper and songwriter who initially started as a lead vocalist for acclaimed indie rock band ‘Gigantic Roar’ at 18. As time went on, he discovered his passion for hip hop and rap and found his niche here. His song ‘Set That Shit On Fire’ was nominated as Best Hip-Hop Song at the GMAs his year. Despite his youth, Leo is well acquainted with the Taiwanese youth and has a sizeable following on the internet. His first hip hop album ‘Artists’ Mood’ which was released in 2016 was widely praised, birthing the hit single “Weekends With You’ featuring R&B singer 9m88. Leo also devotes some time to being one half of hip–hop duo “Yeemao” which he formed with fellow rapper Chunyan with new work coming soon.

Mr. Gin is a professional DJ hailing from Tainan who originally was a member of rap group E.A.C. After serving the military he began focusing on being a DJ and has years of experience at some of the most highly acclaimed nightclubs in Taipei. In 2009, Mr. Gin, DJ Afro and DJ Kid formed ‘A.K.G’ and participated in the DMC World DJ championships where they won the preliminary rounds and represented Taiwan in the world competition. His music style natural and scratching skills unrivalled, his work is intimately intertwined with that of Taiwan’s best Hip Hop companies including KAO! INC., Truecolor and KUNG FU Entertainment.

The tour in itself is one of the first from Asia to be touring as an entire company of artists, so if you’re interested and want to see more of these events in the future, be sure to show up and give them some support!