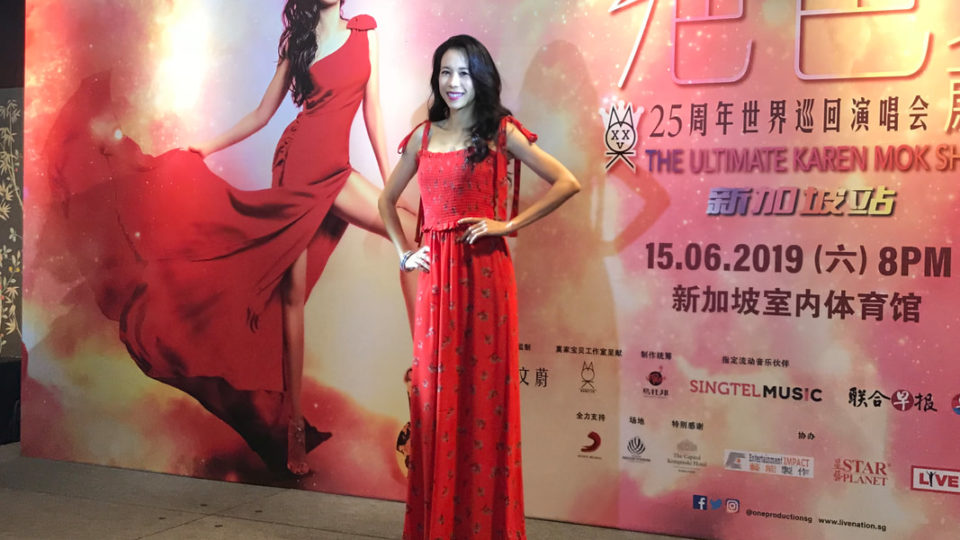 Resplendent in a flowing red summer dress, Hong Kong Diva Karen Mok took to the stage at a press conference at Singapore’s Capitol Kempinski hotel to chat about the upcoming Singapore stop on her 25th anniversary tour ‘The Ultimate Karen Mok Show’.

Said by Mok to be the “last pop concert tour” she’s ever going to do before moving onto new musical pursuits; as per the wordplay on the tour’s name, the youthful veteran says that she’s pulling out all the stops on her final hurrah.

As the creative director of this world tour, Mok says that she has always had ideas since she was a little girl, and the stage has always been her choice of platform to execute them on.

From including a fusion of western and oriental elements into her performances to incorporating localised elements into each stop of her tour such as noodle-pulling, Mok says: “everything signature, things that won’t be done again in the future (will be included in this concert)”.

As for what the seasoned world-class performer has planned for after what she calls her “last big pop concert”, the hardworking performer says that she will never retire, and has plans to expand her career to creating a Chinese form of musical theatre.

When asked why this is something she’s passionate about, Karen shared about her passion for challenging herself and for the artform itself:

“Well I think it’s the most challenging of all the different kinds of performing arts because musically you have to be able to sing, and dance, and dance, and do it live – every night (laughs), that is quite tough. And also because during my years in London i would go watch a lot of musicals and I actually even auditioned for Miss Saigon, so it’s kind of like something on my wish list.”

As for why she’s particularly interested in creating a Chinese form of musical theatre, the pioneer once again looks to her roots for creative direction.

“I feel that for our industry here, we really should have our own form of … musical theatre, because just like how London has the West End and New York has Broadway, I think … Greater China is big enough to have our own version of Broadway. So I hope i’ll be able to do something to make this happen one day.”

Musical theatre or on the pop circuit, Karen Mok has never been someone to follow the trend, but to lead it with grace and strength. So as she closes the door on this chapter and opens the next, what better way to pay homage than to be part of the Singapore stop of her tour, or the next closest one to you?