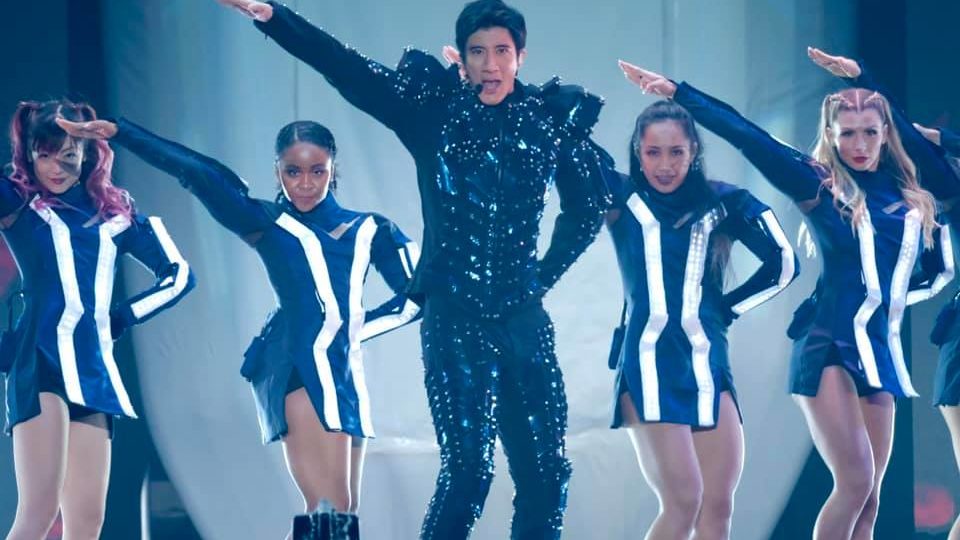 Taiwanese-American singer-songwriter Wang Leehom is truly one of the best performers that I have ever seen live. And I’m not just saying this because he’s the reason this website exists, or that I was so excited to see him live for the first time I burst into tears the moment he stepped onto the stage. Or even because I knew and sang along to almost every song he performed that night. As biased as I am, everyone in the indoor stadium that night bore witness to the electrifyingly brilliant live performer Leehom was at his Descendants of the Dragon 2060 Concert, which was a tour de force of creativity and innovation.

I have seen hundreds of concerts and miscellaneous live performances over the years, (including a recent one by a certain Ms Swift); yet none of them have ever held my attention and engaged me so deeply as an audience member as Wang’s has. My expectations weren’t particularly high going into the performance to be honest. All I wanted to do was cry tears of joy for seeing my inspiration live for the first time, sing along to songs that have been part of my adolescent and young adult years over the last decade, and maybe get a T-shirt to commemorate the evening.

But the sprightly 42 year-old delivered much, much more; presenting an immersive, multi-format experience that seamlessly fused the concert, film and musical theatre genres. A gargantuan task in itself, Leehom instead pulled it off with finesse and aplomb. Drawing on the film genre, Wang introduces us to a Blade Runner-esque universe where he and his team of aliens were sent to earth to bring us to the planet ‘Descendants of the Dragon 2060’ where only love, peace and good music exist (teeny bit lame, but stay with me). Drawing on a tried-and-true film formula to come up with a story with highs, lows and an eventual climax, the show incorporated curated components throughout that were displayed on the screens, moving the story along by adding characters, impetus and atmosphere in a way stage setup could not easily provide on a world tour. He then added a creative twist to the live experience; bringing the story to life with the help of his dancers; some playing transitional love interests and even duet partners in some scenes, with others having small parts in moving the storyline along.

​It was also incredibly skilful how Wang walked the fine line between staying in character whilst engaging the audience the whole time; there weren’t many generic concert phrases being thrown around; such as ‘Singapore put your hands up!’ or ‘How you doing tonight?’. Instead, every bit of dialogue was uttered through the persona of an alien whose mission was to stave off baddies and deliver us to the other planet. The gracious singer skilfully engaged the audience in a variety of different ways throughout the concert, by changing lines in the lyrics, doing call-and-responses, and creating spaces in songs where he could duet with fans.

While there were no fireworks, aerial acts or huge stage designs to speak of, Leehom stuck to what he does best: delivering great music that cuts deep to the heart of the essence of the live music experience. From delivering stunning, emotive ballads from his grand piano (唯一，你不在，你不知道的事) to strumming his way into our hearts through a guitar (依然愛你， Shallow), to the luxurious sounds of the violin (落葉歸根, Julia), Leehom’s musicality showed no signs of waning as he switched gears seamlessly, giving himself entirely to the music each time. And even on the tracks where he wasn’t showing off his instrumental skills, his producer side came to the fore and excelled in bringing the futuristic element to the show.

It was so mind-blowing to me how much work so obviously went into the re-arrangement of these songs for the purpose of the world tour. Re-jigging melodic lines, slowing things down and speeding other things up, switching one vibe out for a completely different one that went with the concert theme better, Wang’s attention to even the tiniest details had me entirely won over. Never giving in to the laziness that a live band and booming sound systems often extrudes from amateur artists, the classic happy-go-lucky ‘愛你等於愛自己’ was transformed into a tropical house number, the seductive R&B ‘美’ updated melodically with EDM beats while the characteristically warm ‘我們的歌’ became a lazy, swanky, jazzy piece that soaked up every bit of the atmosphere.

And yet, all state-of-the-art concert technology aside, Wang’s charm and stage presence is indomitable. Giving himself space to interact with fans outside the confines of the character created for the tour, a half-hour encore ensued, allowing him to show a rawer side to himself that fans craved. He let fans pick songs, gave an extensive list of all the things he loved about Singapore (quipping that he was entirely taken with our political stability and lack of earthquakes), and surprised everyone including his bandmates with an impromptu rendition of ‘Shallow’ from the movie ‘A Star Is Born’.

​All these little moments and more created an intimate connection between audience and artist that every singer values; yet few have truly attained. As a performer, Leehom is much more than an impressively talented vocalist and musician. Through his words and actions, he puts the needs of the audience before his own; allowing them to choose to lend their ears to him rather than forcing them to. Never hasty nor eager to steal the spotlight, Wang invited the audience to join him on many occasions, treating them as a choir and part of his team rather than passive audiences. From providing backing vocals to 花田錯 to dueting with the audience on ‘你不知道的事’, a single phrase ‘我指揮，你們唱 I’ll conduct, you sing’ uttered by Wang was enough to show his sincerity in creating an authentic connection with his audience; which they responded to with much fervour.

On the downside, I couldn’t quite get with the program in regards to the choreography for the showcase, which made a strong attempt to match the meaning of the lyrics, yet hit an awkward snag when trying to combine trendiness and flow. A little bit of a disconnect, but still nevertheless enjoyable. And although Leehom moved smoothly between the different scenes and themes within the concert, the overall concept could have been more refined and nuanced rather than reduced to a one sentence slogan. If there was a hint more food for thought thrown into the concept, it would have made the experience even more meaningful than it already was.

However, the night was already unbeatable as is. Leehom, his music, and his philosophy has inspired me for over a decade; accompanying me as I’ve grown from a teenager into a young woman passionate about bridging gaps between cultures. From this concert, I was finally able to experience Wang’s ‘chinked-out’ music in full force, and to witness for myself that for him, his passion for ‘east-meets-west’ truly is in the blood. As someone who has no single ‘favourite artist’, I think Leehom is as close as it’s ever going to get. I am so proud to see with my own eyes that the representations and values he has championed once and again live on to this day; and because of it, I too am even more sure that following in his footsteps was meant to be. Thank you for pioneering a path to cultural harmony with your music and intellect; and for giving me a night to remember always.

Relive the magic with our concert setlist: