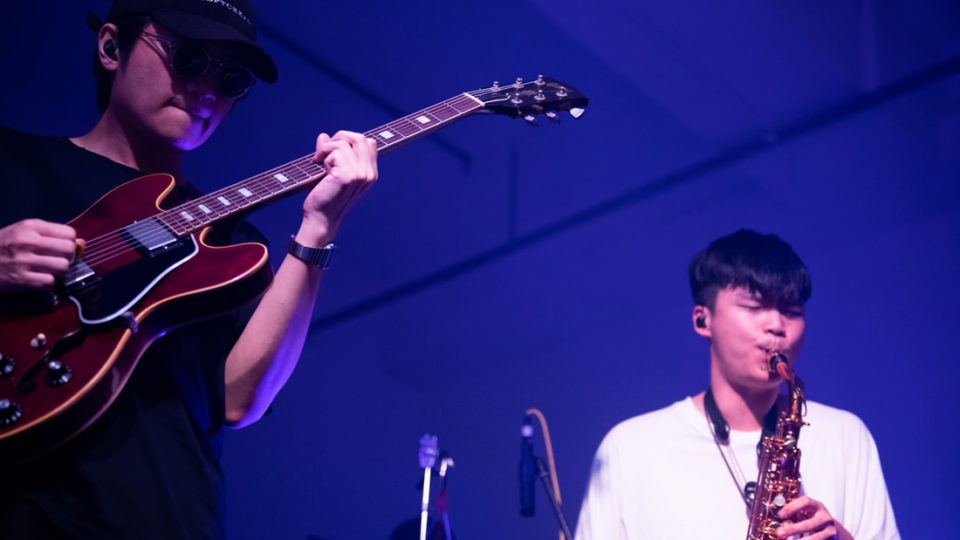 Upon entering the EBX venue around 8pm for Sunset Rollercoaster’s live show in Singapore, I was not in the mood for moshing through another two-hour performance. Dragging my heels and whining like a lil b*tch about my sore back, it was clear I was in no mood to jive and chill. This continued through the opening act, where we saw local shoegaze act Cosmic Child open for Sunset Rollercoaster. Amidst technical difficulties, the band soldiered on and although a little deafening at times, was a solid effort enjoyed by the audience.

Yet the moment the Taiwanese soft rock band stepped onto the stage, something inside of me flipped a switch and absolutely all the negative energy in me transformed into excitement and exhilaration. Dressed simply in basic caps and t-shirts, the band’s sparse look intrigued me; I had expected something a little more out there given their psychedelic, vibrant sound. Yet this was just one of many details within the curated performance that pushed the band’s lush sound and creativity to the forefront of the live experience.

Wearing a pair of vintage circle shades, lead vocalist Kuo Hung did not speak much throughout the whole performance; choosing to allow their music to speak for itself in a fluid and ever-dynamic way through clever musical interludes that joined most of the songs in their repertoire while adding a sense of free-flowing musicality to the experience. Only pausing to say a few brief thank yous throughout the performance, it was only towards the end of the performance that Kuo Hung interacted a little more verbally with the audience. Starting off with his wicked but also quite sweet sense of humour, he quipped “you guys are quite crazy. Don’t hurt yourself okay?”. And with that one sentence, the sold-out crowd went absolutely bonkers.

Paring everything down to the basics while achieving a synergetic effect is a hard trick to execute (see Khalil Fong TIO Tour Review), but the Taiwanese soft-rock band pulled it off with grace and aplomb, proving why they have been one of the most electrifying performers in the indie live circuit; both at home and overseas. While lead vocalist Kuo’s vocals are often genteel in recordings, they took on a surprisingly strong and clear quality in the live setting which cut clearly through the crowd. Although their repertoire continued to incorporate certain namesake riffs and hooks to get the crowd cheering and on their feet, the band built around keeping these riffs while skillfully rendering their live arrangements more dynamic and crowd-friendly.

Favourites of mine include their opening track ‘Bomb Of Love’; an oldie but a goodie. While the original track was simple, folksy and generally more 70s inspired; their live version was decidedly more upbeat and rock influenced. Revamping a few older favourites including ‘No Man’s Land’ and ‘Little Monkey Rides on Little Donkey’, the band of course could not forget to perform a few tracks from their 2018 release ‘Cassa Nova’.

‘Almost Mature ‘87’ was amped up a few notches with the electric guitars and paired with a dreamy, delicious 80s style rock solo; while ‘Greedy’ slowed things down just enough to seduce the crowd with their languid groves. And who could forget those amazing Saxophone solos by band member Hao Ting interspersed throughout the performance? Mimicking the guitar solos often done in rock tracks but on the Sax; his solos had the supportive crowd going wild, leaving screaming fans and broken reeds in his wake as he turned the brass instrument into a roaring, squealing headbanging machine.

Ending the night of course with a crowd favourite ‘My Jinji’ and then encoring with the sweet and heart-warming ‘I Know You Know I Love You’; the audience’s state of utter bliss throughout the entire showcase was living proof of the band’s live clout. Fluid, dynamic, and vibrant; Sunset Rollercoaster’s music often comes in small, unassuming packages or spaces, but boy do they pack a musical punch. The band have elevated their live performances to a whole new level in ways that reveal the thought, detail and passion that have gone into curating the experience. For me, the night was simple, but nothing short of perfect.

Sunset Rollercoaster’s ‘Business Trip’ tour will be heading to Bangkok, Jakarta, Kaohsiung and then China and Hong Kong; with future dates in North America and other regions to be confirmed. Make sure you’re in the know by checking out their tour dates here.