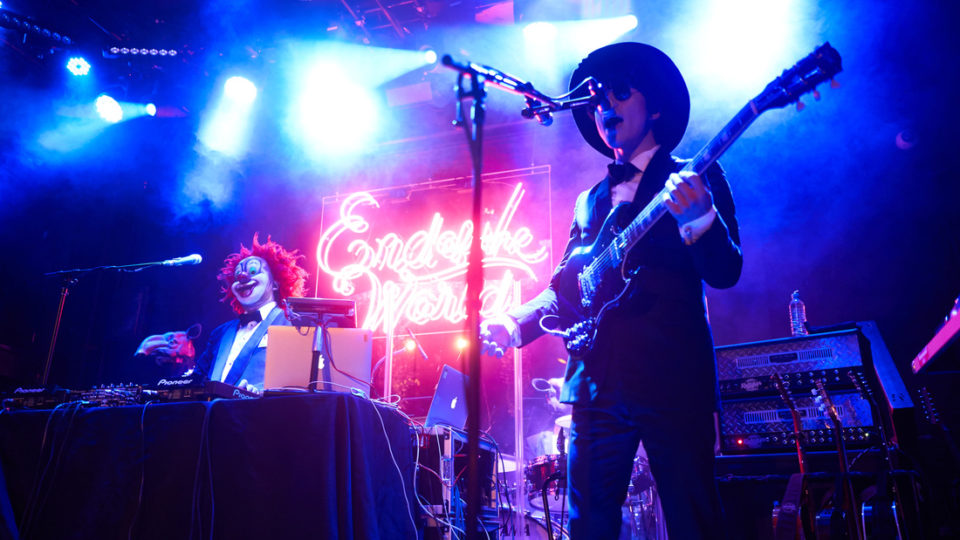 Entering New York’s notable downtown venue, the Bowery Ballroom, I was met by the familiar buzz of an eager crowd, excited but still patient, waiting for the show to start.  The lights were low all over the house, leaving those up on the balconies in darkness, with the floor illuminated by a large, pink neon sign reading “End of the World” in cursive hanging over the small stage. Skeeter Davis’s “End of the World” softly plays on repeat as the late arrivals hustle into the pink haze, pushing as close to the stage as they can get which, with no security barrier, is pressed right up against it.  The old fashioned curtains and brass railings of the Ballroom, the neon sign, the people cheerfully chatting away while Davis croons overhead “…don’t they know its the end of the world…” is positively dreamlike; and I seem to be the only one who doesn’t know what’s going on.

​My relationship with Tokyo-based J-rock/pop band SEKAI NO OWARI is budding, a recent discovery, and as until last week they had never appeared in the Unites States I certainly have never seen them live.  But their reputation precedes them: an enormous and devoted worldwide fan base, three studio albums, a documentary, and sold out stadium concerts in world renowned theaters like the Nissan Stadium and Nippon Budokan. Their studio work, music videos, and live performances are famous for creative theatrical elements with elaborate and heavily stylized costumes, sets, and personas.  So, I was frankly surprised when Bowery Ballroom was announced as the venue for their New York debut, and the final stop on their short American debut tour; an esteemed house of music of course, but a fraction of the size of Budokan, with a small stage not obliging to complex theatrics.  The Ballroom turned out to be the perfect choice for a debut show: elegant and intimate, well known, and classically New York.  The size of both the floor and the stage proved not to be a limit but an opportunity, showcasing the bands new aesthetic arrangements.

When the band hit the stage, the crowd loses it.  The players include the four SEKAI NO OWARI members, Saori on piano, Fukase on guitar and lead vocals, DJ Love on the soundboard, and Nakajin on lead guitar, and two men clad in suits and what appear to be tapir head masks backing up on drums and base. The three male members all wear black tuxes and Saori sports a beautiful but simple black dress, a departure from their typical wild costumes; it’s something more mature, even somber, but still maintaining their energy and edginess, matching the Ballroom’s rock n’ roll/classy art deco feel.  They look like they belong there.  With no introduction needed they jump right in, starting the night off right with “ANTI-HERO,” one of the band’s latest singles, and an English version of “Monsoon Night” (my personal favorite of the night).  The audience was having the time of their lives: singing and dancing, most notably during Saori’s piano solos, and clapping and jumping at the command of DJ Love.

It’s clear that each member has their own fan club, no one goes anywhere or says anything without an enthused cheer; even the tapir men get spirited applause.  And I see why, they really are loveable.  Made up of long time musical collaborators, roommates, and above all, friends, everyone fits in place and does their part with professional musical skill and charisma.  The on-stage banter doesn’t come often but when it does it is endearing, consisting of thank-you’s to the crowd and NYC pizza jokes to each other.  The understated stage dialog and humble thank you’s seem incongruous with the fervor of their fans and their multi-platinum superstar reputation overseas, but it works.  The group was happy and openly grateful for the support from the crowd, but still calm.  With such open, confessional lyrics and an adoring crowd the concert could have easily become a therapy session, but the band managed to maintain intimacy while also remaining cool and collected—a job well done, and very New York.

“Dragon Night” struck the biggest chord of the night, as one of the groups most popular singles to date in both the Japanese and English versions. As the end of the night grew near, the songs became more emotional, showcasing the group’s range and diversity in sound over the years.  For the slower ballad, “SOS” Fukase takes things down a notch and uses his pipes to move the audience.  The crowd is enthralled;  someone standing in front of me holds her hands over her heart and whispers to her friend “I’m going to cry,” and several earnest “no, thank you”s crop up after Fukase closes with “…now I’d like to thank you for staying by my side.”  They move onto “Mr. Heartache,” another successful single with an Owl City feature; they inform us that it will be their last song of the night which doesn’t go over well, particularly for that girl in front of me.  “Mr. Heartache” sums up the whole night, combining optimistic, emotional lyrics with a dance beat: the End of the World trademark. Of course, the crowd-wide dance euphoria is replaced by desperation when the song ends and the band departs, shaking hands and waving as they go after only nine songs. The cries for another song are immediate, some calling out requests for their favorites.

A week before the New York show, SNO debuted in America in Los Angeles’s Roxy Theater, another small, intimate venue with the same short set. The band had to politely refuse their call to encore bewildering their West Coast fans, as the nine songs played were the bands entire English discography.  This time they were better prepared, returning to the stage and playing another version of “Dragon Night.” Initially the crowd seemed confused, but it wasn’t long before they succumbed, dancing more fiercely than before. When Fukase said “jump” they jumped.  And it was just as hard to say goodbye the second time, the band spending even more time out on the stage shaking outstretched hands and talking to the crowd before leaving, Nakajin taking a homemade banner with him.

The night was full of great songs, stellar performances, and a happy crowd.  But, although the music was well executed and certainly well received, the choice to so drastically rebrand was in some ways a strange one.  Of course, in style, sound, or otherwise, all artists inevitably grow and change as they move forward, for better or worse. In SEKAI NO OWARI’s, or End of the World’s, case I found their stylistic changes perfectly suited for the venue and location, and the selected set was great in showcasing the bands range and growth over the last decade, while avoiding the “best hits so far” set that I expected.

However, the choice to avoid Japanese so entirely sometimes felt forced.  I can only guess why the set, name, and even most of the on-stage banter, had to be exclusively in English: hinting at their upcoming English album, expanding their target audience to English speakers unfamiliar with the bands past work, testing the waters for a longer, larger, American tour.  In any of these cases, it was effective, but as their regional debut, many of the attendees would be long time fans waiting years for the chance to see them live.  Whether or not these fans are Japanese speakers, they would be plenty familiar with the survey of Japanese material, like “RPG” (arguably the groups most popular song, and oft requested throughout the night). Excluding that material could be potentially alienating or at least disappointing to long-time fans and leaves a huge section of quality material out of bounds for newcomers.  Refusing to give in and play a Japanese hit, even during the encore, indicates a seriousness in this American repackaging.  I can appreciate the difficulty in that decision and transition and I respect the group’s boldness in taking the music, style, language, and otherwise in a new direction (and their creative right to do so). Hopefully their long time fans will feel the same way, but, if their night at the Bowery Ballroom was any indication, that won’t be a problem.

​A job well done to SEKAI NO OWARI. I look forward to seeing what you have in store for us next. 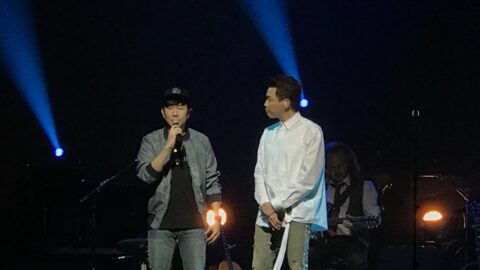