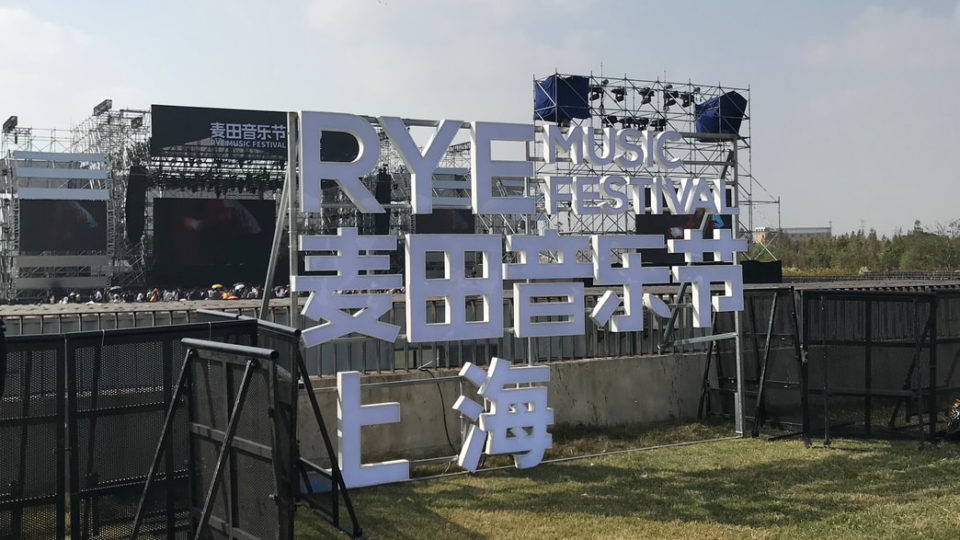 Set in the Shanghai International Music Village, I forwent Disneyland for the Rye Music Festival on my most recent trip. Boasting two stages with a lineup of forthcoming Mandarin indie and pop acts from both sides of the strait, it was my first time attending a music festival in China and I was excited to see what it would bring.

Set amongst a instagram-worthy field of rye and other herbs (the venue is usually a herb garden), there weren’t much attractions to speak of other than a 全民K歌 karaoke stage, a handful of stalls and a bizarre tent filled with claw machines (which ended up being our only pastime during the festival other than the acts).

But the two stages, equipped with solid sound systems proved to be more than enough to satisfy mine and the thousand(s)-strong crowds who thronged to attend the annual music festival.

Starting off on day one bright and early with one of my favourites Ann Bai白安, the petite singer-songwriter delivered a better performance that day than the previous two I’d witnessed earlier in the year by being her charming and quietly sophisticated self.

​Her band this time around seemed to fit better with her vibe to create a delectable organic atmosphere over which she delivered her light, lilting vocals for a perfect sunny day treat. Choosing tracks particularly fitting for this nature filled event, Ann performed “Catcher in the Rye麥田捕手” and “Our Era我們的時代” along with a couple other tracks from her hot-off-the-Press EP “44 days”. Choosing not to perform her crowd favourite “What Brings Me To You是什麼讓我遇見這樣的你” was a bold move that I fully appreciated too.

I doubt there was another act at the festival who performed in as many languages as The Chairs 椅子樂團, who performed repertoires in Mandarin, Taiwanese, English and Japanese at their showcase. The Taiwanese band’s cheerful and larrikin stage presence was refreshing to see. Performing in style with a five-piece band (adding drums and saxophone to their set), lead vocalist Yong Jing 詠靖 showed the crowd a good time with his “groovy, baby” Austin Powers stage persona which juxtaposed quirkily with his other two members’ more subdued presences. They performed a few new tracks released this year such as the cheerfully soulful “City Diving城市潛水” alongside older favourites “Dedede” which had the crowd bopping along to their sunny and diversely influenced brand of retro pop.

Other highlights of the first day included band COM’Z, whose frontman’s irreverent sense of humour and raspy vocals endeared me to them immediately. judging by the sea of people headbanging along to their rock/electronic offerings, others felt the same way too. Singing “I don’t want you to face this complicated world alone我不希望你一個人去面對這個喧嘩世界” as their closing track, it felt especially heartfelt hearing it live in Shanghai; a city where business and loneliness coexist.

I also discovered mainland internet heartthrob Eason沈以成, whose textures Guo Ding-esque vocals attracted me immediately as his voice was projected over loudspeakers across the field. A viral Netease artist, his easygoing pop offerings weren’t extraordinary, but nevertheless the huge crowds who came out to see him were testament to the pull of the mainland platform infamous for its only-platform deals with artists. Another internet sensation JMQ (you’ve probably heard his music on one of those YouTube music curator channel loops) proffered a combination of boy-next-door looks and quirky EDM pop which wasn’t quite for me, but managed to get the crowd going all the same.

Although I didn’t manage to catch the high profile acts in the first night such as Joker Xue 薛之谦, the second evening of the Rye Music Festival brought out the party animal in me as we hustled with the crowds till the end (last act finished at a very mild 9pm).

Catching our favourite Jazz darling 9m88 doing a live full set for the first time, she showed up in full Halloween black-and-orange glory, endearing crowds immediately with her cheeky smile and witty quips. With larger-than-life vocals and those wacky inimitable dance moves, I loved how she brought the house down with her live rendition of “Aim High” and her amazing jazz improvisations on “If I Could 如果可以”.

Sticking around for two greats who have straddled the indie and pop scenes seamlessly we regrouped at the Do Stage along with thousands of other fans who came out to see Yoga Lin 林宥嘉 and Hebe Tien 田馥甄 perform. Yoga brought the heat with his electrifying vocals on rock tracks such as ‘Speaking in Tongues口的形狀’ and ‘Wake Up自然醒’, while taking audiences on a nostalgic trip with classics ‘Lies說謊’. I loved how Lin took a bold stance and shied away from too many of the love songs he’s known for; instead choosing a more eclectic setlist and relying on his reserved tone to entice the crowd; making for a memorable performance.

In the fourty minutes or so leading up to Hebe’s performance, I found myself squished back-to-back as throngs of hardcores piled up to get a good spot to see their beloved goddess live. And sure as day, Tien delivered in all her awkwardly adorable glory; even taking a full five minutes to read all the signs that fans had prepared for her. Also choosing to move away from too ‘pop’ tracks from her repertoire, it was a night filled with warmth as she sang well-loved songs such as ‘To Hebe’ and ‘My Love’, as well as personal favourites of mine ‘Forever Love 愛著愛著就永遠’ and ‘Useless 無用‘. Tien delivered strongly that night in her lilting, unmistakeable vocals; backed by a cream of the crop band who brought the tracks to live in the best way possible.

An event with a chill and easygoing vibe, Rye Music festival seems right up my alley. Two days filled with well curated performances by some of my favourites acts in good Shanghai weather, what more could I ask for? Only downside was leaving the festival with the crowds meant being policed out random side gates alongside hordes of others before joining an hour-long queue for the metro (the only method of transport in and out). Worth it…? Still quite possibly.