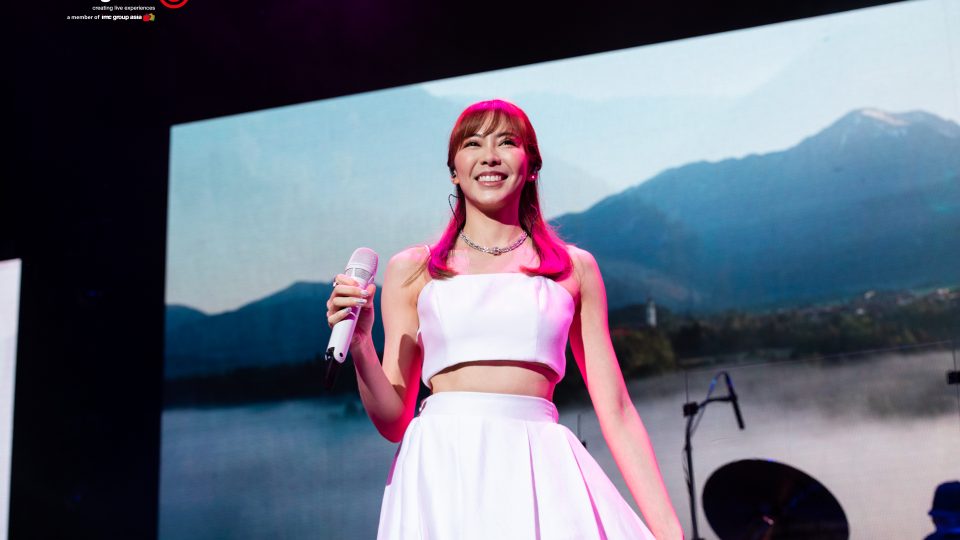 By Jocelle Koh
Special thanks to IMC Asia

I’ve been a fan of Singaporean songbird Olivia Ong 王俪婷 for about as far back as my Mandopop journey takes me. From her enchanting English Bossa Nova covers to her unique take on the Mandopop genre, and let’s not forget her successful early stint in the Japanese market, I have always been in awe of how she managed to do it all. In many senses, she was a pioneer in breaking new regions as a new kind of pop act.

Having never had the chance to see her live before, and taking into account that Ong was coming back from a seven-year hiatus, I was apprehensive and decided to keep my expectations low for the evening. So much time had passed- would she just be singing her best hits and cover songs to please local audiences? Would I not feel the same about her music as I did before?

Yet as the lights dimmed, I couldn’t help but be excited to hear Olivia’s familiar voice once again and re-live her music in the same space with her. And from her first note, I instinctively knew that the seasoned singer-songwriter was not there to disappoint that night.

Immediately you could tell that Ong was a world-class performer innately attuned with the audience. Quietly commanding our attention as she stood centre stage, the legendary songstress proceeded to sing a selection of four tracks in quick succession for audiences who have been bursting at the seams to hear her sing again.

Starting with her timeless Bossa Nova rendition of “Fly Me to the Moon,” Olivia’s voice was as exquisite and sweet as I remember, and it felt as if no time had passed since we last heard from her. Coming at the song with a more acoustic take with the band, I appreciated the refreshed version which heightened the experience past previous recordings, which was a feat in itself.

“Ready for Love” brought with it a new sense of excitement and liveliness in Olivia’s vocals; replacing the original girlish sweetness from the record with confidence. You could instinctively tell that she was ready and bursting to share her music with the audience, and that energy well and truly resonated off the audience too.

Seamlessly switching things up with the extravagant opening of slow jazz number “A Love Theme,” Ong showed endless versatility and ease on stage that read as if she had never left. Transforming the concert hall in an instant, the rearrangement for this song was probably one of my favourites of the night, creating a more warm and intimate version that reminded me of a live band in a Tokyo coffee shop after hours.

To end the trip down memory lane, Olivia ended the first round of songs with a fan favourite “海枯石爛 When the Seas Run Dry and the Stones Go Soft,” a quietly woeful track that perfectly combined her emotive vocals with the ‘Mandopop ballad starter pack’ of extravagant strings, keys, and melancholy guitar. While the band was more or less stuck to the structure of the original arrangement, Olivia nevertheless took the rendition to another level, taking her time to play out every single note and effectively bringing everyone into her timeless little musical bubble.

Even when she began speaking with the audience for the first time since entering the stage, Olivia wasted no time with pleasantries or talking about how COVID has impacted our lives and hers. She knew that music at its core was escapism, and made it her mission to whisk us away for an evening.

So she talked about everything BUT what was happening in the world around us at the moment. From the stories behind the songs to her musings and philosophies on life, Olivia made each and every listener feel like they had a private audience with her, and that was a truly special experience to be a part of.

For the rest of the concert, the elegant artist continued to raise the standards and surprise us with her vocal versatility, depth, and performance quality. On Bossa Nova standards such as “I Feel the Earth Move” and “Quiet Nights and Quiet Stars,” she seemed to hit her stride, improvising with quirky inflections, playful ad-libs, and even changing the lyrics to “Marina Bay Sands” at one point.

On the Mandarin side of things, Ong did not disappoint with her renditions of crowd favourites such as “如燕 Like a Swallow” theme song to critically-acclaimed Singaporean drama “Little Nyonya” and “不變 Unchanging,” retaining the essence of both original songs to allow audiences to fully connect with them.

Through the many little details included throughout the concert, it was a pleasure to see Olivia at work injecting her uniqueness into every song. From interweaving lines of Mandarin into English songs (“Quiet Nights and Quiet Stars”) and vice versa (“要你管 The Silly Song”) – to adapting certain songs to fit her unique vocals (her rendition of A-mei 張惠妹’s power ballad “聽海 Listen to the Sea” was different yet equally moving), it is no wonder why so many of her covers have become classics in their own right.

An 18-song set packed with Ong’s world-class performance, no gimmicks were necessary to keep the crowd happy during the show. I admired how Olivia managed to keep audiences engaged and wanting more throughout the show without a single outfit change. Despite some wardrobe malfunctions which she handled with endearing grace – at one point she announced she needed to fix something, and quipped to the audience, “Don’t mind me for walking like this!” before waddling off stage with her long skirt hiked up – the performance experience was almost seamless. The only exception to this was the visuals playing in the background that were gaudy and distracting at times, and didn’t quite fit with Olivia’s vibe.

But just when I thought my heart could not be any fuller, Olivia introduced the concert’s music director and her longtime producer/collaborator Will Peng to the stage. I have been an admirer of Will’s works for many moons, especially his collaboration with Olivia. So seeing him in the flesh sharing the stage with Olivia was truly the only way the night could have been made more complete for me. Dueting on an underrated song by Feist called “Gatekeeper,” Will updated the originally guitar-based song with his jazzy keys and beautiful harmonies, while Olivia’s bright and sonorous vocals brought a new sense of lightness to the song, instantly transforming the stage into an intimate, stripped-down setting.

Ending the night on a high after bringing a funky version of Frankie Valli’s classic 1967 hit “Can’t Take My Eyes Off You,” Olivia was quickly called back by the audience for an encore where she stoked the coals with yet another classic, Whitney Houston’s “I Wanna Dance with Somebody (Somebody Who Loves Me).” While COVID-19 restrictions prevented a full-on mosh-pit situation, there couldn’t have been a better way to end the night. The song was a slow burn from start to finish as Olivia took her time as always; playing out every chorus in her melodious vocals as the arrangement built from start to end.

And the audience soaked up every moment like a sponge. While the performance ended on a relatively more subdued note your average big scale Mandopop concert, I think it would be fair to say there wasn’t a single person in the room who hadn’t been moved by Olivia’s performance that night.

As I write this review, my mind keeps going back to the feeling of timeless magic that exuded from the entire evening. To be able to make audiences feel like you’re picking up just where you left off; that you had never left their sides is no easy feat, but Olivia well and truly rose to the occasion. In just one evening, she has proved that music lasts long after the song ends and that each concert, each chance to meet and appreciate those songs in the same space should be treasured individually, uniquely, and with a great deal of care. While I’ll never forget this experience, here’s to hoping we won’t have too long a wait till the next one!